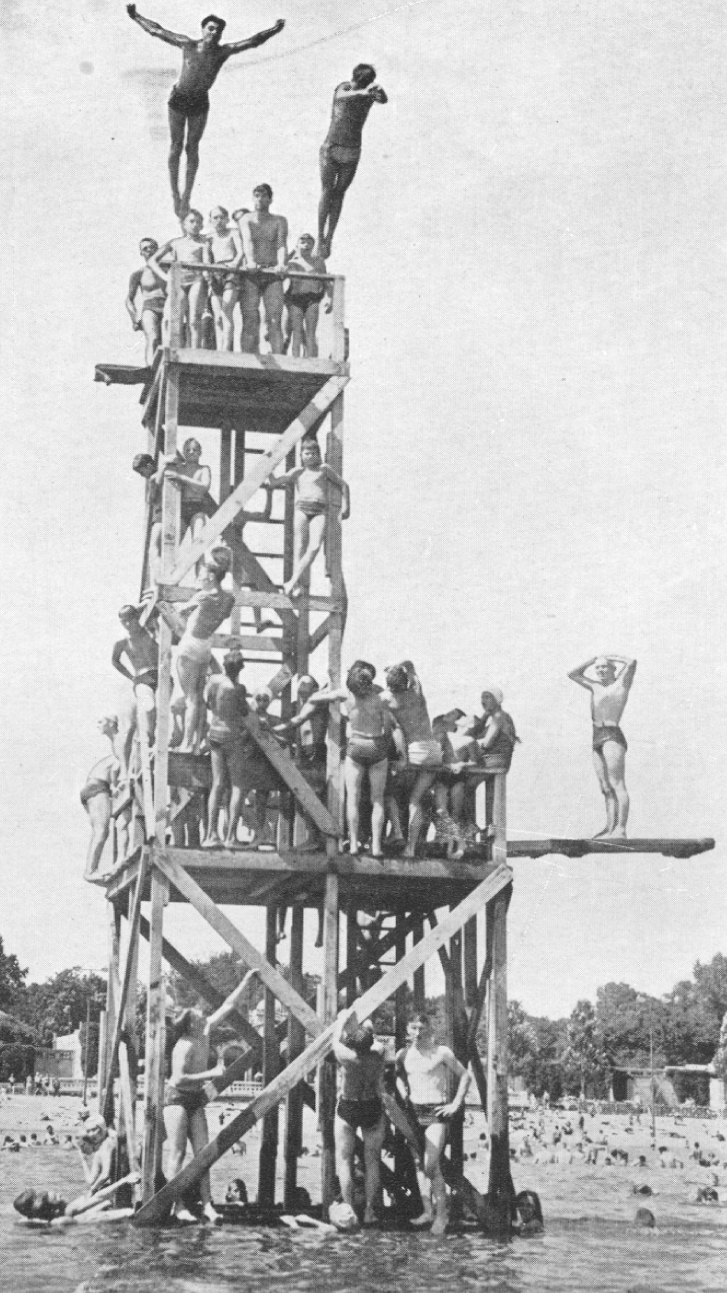 Diving Tower at Lake Calhoun in 1940. (Photo submitted by MPRB)

Who would have thought that after the last glacial period ended in the North American continent that it would leave a series of building-sized ice chunks to melt and form impressions called kettle lakes, some popular and some extremely popular based on their proximity to future settlements. The first of these such popular settlements was organized by local native Americans called Cloudman Village. From there it would only get busier. When this group moved south white settlers would soon fill the gap. Ever since Lake Calhoun has just become more and more popular.

Considered one of the most popular city parks, originally it was named Loon Lake and then it was renamed to commemorate the service of John Caldwell Calhoun. Once a U.S. Senator, he became a U.S. Vice President and then finally he was the Secretary of War serving under President Monroe.

To address it’s growing popularity and maintenance issues the Minneapolis Park and Recreation Board (MPRB) held a feedback-driven meeting at Lyndale Farmstead on November 5 hosted by Bob Fine, Tracy Nordstrom and members of the MPRB planning department, Jennifer Ringold and Tim Brown.

The purpose of the meeting was to get feedback from the community and frequent users of Lake Calhoun. Such meetings are only held when MPRB has a large amount of money to spend but since Lake Calhoun’s plan dates to 1997 they thought it would be good to get some current feedback from stakeholders. Those comments would be taken into consideration for the existing master plan for Lake Calhoun and considered when funding becomes available to execute changes.

From those groups the most frequently discussed issues at the meeting were safety, water quality, park visitors and sailing organizations’ needs.

Larry Salzman of the Lake Calhoun Sailing School (LCSS) remembers in the past when the parks had a staff member stationed on the lake for most of the day with access to a skiff for lake emergencies. Nowadays both the LCSS and the Calhoun Yacht Club (CYC) sailing instructors end up doing a fair amount of rescue because they are usually the closest and fastest to respond. Some participants suggested that there be a responder stationed during the busy months on the lake.

Water quality and environmental health and maintenance continue to be ongoing challenges for the MPRB. In addition to milfoil being an environmental hazard to the lake, it was mentioned by the CYC that milfoil inhibits the scheduling of sailing and races because it makes the lake hard to navigate. And that prompted many to raise the issue of milfoil harvesting and it’s frequency to reduce its environmental impact on the lake.

Both the Sailing School and Yacht Club requested badly needed updated facilities and more room due to expanded membership for both organizations. One potential location under consideration is somewhere in the Northwest corner of the lake.

Several participants raised the issue of pedestrian safety while crossing the street to the lake and back. Also, the general flow of participant traffic was mentioned in relationship specifically to the congestion and potential danger of the bridge over the stream leading to the lagoon between Lake Calhoun and Lake of the Isles. But the biggest safety issue raised was the convergence of traffic at the circle at the sailing boat house and the Tin Fish restaurant. Story after story described the emotional intersection of anger and frustration as users continue to crash into and almost crash into each other at this high occupancy intersection.

Athena Priest with her husband Sheffield, have co-owned Tin Fish since it’s opening in May 2004. She says concierges at local hotels are advising international visitors to Minneapolis to “take a bus, go to Lake Calhoun, rent a canoe and eat at the Tin Fish.” She welcomes the daily international visitors to the lake but as one of the main gateways to the lake, the Tin Fish gets all of the questions-“Do you know if that running event is cancelled due to weather? Do you have a band-aid? Where are the canoes for rent? Do you know CPR? What is a good bus to take home?” She said they’re happy to help when they can but during the summer months they tend to be very busy and not able to answer everyone’s questions. This prompted some to suggest that the park provide a volunteer or staff member stationed on-site to answer general and specific park questions.

As the evening progressed what became clear was that organizations like the sailing organizations had a lot to offer the dialogue. It’s a simple fact that just because they are around a lot they witness a lot. Another of those active organizations is the Tin Fish. Not only do they answer a lot of visitor questions as mentioned earlier but they contribute a lot to the park. They believe that simply the presence of an open restaurant with customers provides an active deterrent to crime in the area. And another item that few people may know is the revenue they generate for the park. Their rent is based on a sliding scale. The more money the Tin Fish makes the more money the MPBR makes. And that percentage that the MPBR makes increases as the gross revenue from the restaurant receipts goes up. Another way to look at it is that their rent is a percentage of gross sales on an increasing scale. All the money that the MPBR makes from the Tin Fish goes back to their general fund.

As people discussed these issues and others to a lesser extent, one of the byproducts of the night was more understanding of each other group’s interests, concerns and experiences. So not only did MPRB gain valuable data for their continued management of Lake Calhoun but citizens gained valuable knowledge and understanding of each other as an end in itself. Stakeholders engaged in a sort of cross-educating forum of noticeable patterns, positive and negative experiences and local histories.