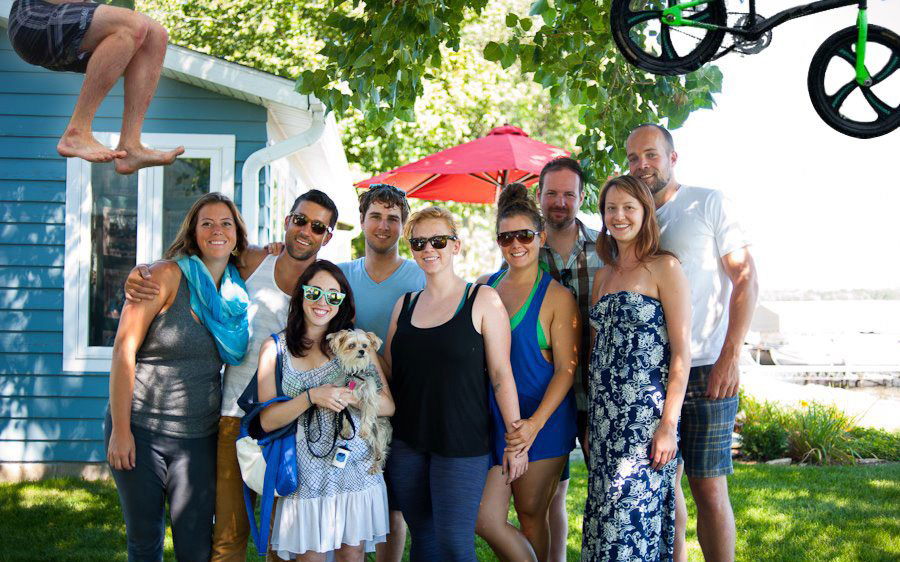 Again, we woke up and the very tall men of the group and/or Ms. Hovi herself put together amazing breakfasts. With group efforts, those of us who cook (not me!) made delicious meals three times a day like they did in Lutsen. Steak, burgers, chicken and asparagus, corn on the cob…drool. And again, like last time, Branderson took frequent spontaneous naps (as did I). Ninja of course soaked up the love of each and every person and is now going through withdrawal after all the extra attention.

While last time I drank plenty and partied late into the night, for me this weekend escape was more about reading and catching up on much-needed sleep. After a month with no alcohol, a month of being sick, and a month of starting a new job, I was delighted to lay on a bench by a lake and read a book, dozing off whenever I felt sleepy, and not feeling guilty about getting absolutely nothing done.

While the Twin Cities are full of fun and adventure, sometimes it’s nice to sneak off somewhere else in Minnesota. Outside of the Cities there are so many lakes surrounded by people’s lake houses and cabins where the usual activities involve laying around, playing lawn games, swimming, and of course grilling. It’s a nice excuse to not run any errands, get any extra work done, or pay any bills.

For some, relaxing doesn’t quite cut it and they want to make the lakeside just as exciting as a day in the cities. When one of your friends (ahem, @simmerdesigns) buys a BMX bike and a couple of bike ramps off Craigslist two days before cabin weekend, what else does he do besides strap them all to his car and bring them up to the lake? The ramps became a permanent fixture at the end of the dock for the first half of the weekend. If I looked up from my book I could usually see one of the boys (or a brave @MeredithWestin) biking towards the end of the dock at full speed and then flying into the air, throwing the bike aside into the water (except that one time, ouch, B Cole!), and landing with a splash. Somehow it never got old because the facial expressions and weird body trajectories seemed to change with each ride.

With this kind of ridiculousness to watch, a book to read, and a dog on my lap, I could have stayed at the cabin for weeks. #lutsenawesome was in fact quite awesome, but for me at least, it was a whole different kind of awesome. This weekend I’m off to another lake and another lake house. We will see how many more books I get through and if I actually make it into the water to swim this time! Either way, I’ve got a lot of relaxing ahead of me and I could not be more excited.