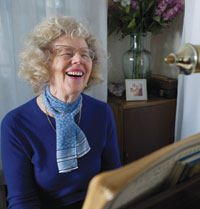 "I'm obsessed with continuing to learn. ... What if  I'm out in public and somebody asks me a question?  I don't want to  look dumb."  -Carolyn Johnson

When Carolyn Johnson Wesenberg was 7 years old, her father, a surgeon, gave her some homework. She was quarantined for three weeks because she had chicken pox, and he asked her to practice tying suture knots. “He told me that he wanted me to work with him someday,” she recalled.

Seventeen years later, Dr. Carolyn Johnson (her professional name) graduated from medical school at the University of Minnesota, one of only four women in her class. She started her family practice career in her father’s office on Dale and Thomas streets in St. Paul’s Frogtown neighborhood, and eventually delivered nearly 6,000 babies over her 47-year career. “I stopped counting at about 5,800,” Johnson explained.

“We were going in circles trying to keep our lives in order,” she said, referring to herself and another colleague, the only two female family practice doctors in St. Paul at that time who delivered babies. “We meant business and we weren’t goofy ladies, and we weren’t charging an arm and a leg like OBs.”

Johnson’s father would perform her patients’ Cesarean sections if needed, and the father-daughter pair shared an office until he retired in 1975. “My dad and I weren’t business people,” she explained. “We just loved what we did. … Neither one of us was gung ho about big money and flashy cars.

“And Heaven knows my mother couldn’t stand me in the kitchen,” laughed Johnson, who, at age 83, still dislikes cooking.

Besides attending the births of her family practice patients, Johnson also delivered babies at houses in the West Bank of Minneapolis and along Marshall Ave. in St. Paul that she referred to as “drug communes” in the ’60s and ’70s. The young adults who lived in these houses typically espoused anti-establishment ideals and had moved out of their wealthy parents’ homes. They preferred birthing at home rather than the hospital, and word-of-mouth referrals came in steadily.

Over that time, birth became safer and safer, Johnson explained. “There were better tools to listen to babies’ hearts and to assess trouble. We were flying by the seat of our pants in the beginning, and we’re just lucky everything turned out all right.”

Family of her own

Johnson wasn’t just overseeing other women’s births; she got married to her childhood sweetheart at age 27, and eventually had a family with six children. It was hardly easy to balance her work and family life, she said. “I would come and go, sometimes three times a night,” Johnson recalled. “But I never got agitated or nervous, and I never had trouble sleeping.” When one acquaintance asked, given her hectic schedule, how she and her husband had so many children, an irritated Johnson replied, “I think we just met on the stairs a lot.”

The focus of Johnson’s family practice involved more than pregnancy and birth. Geriatrics was another aspect, and after referring many patients to nursing homes as they grew older, Johnson was eventually asked to oversee the clients at several nursing homes and earned the official title of medical director.

Johnson tried retiring from both her family practice and her work as a medical director at five nursing homes when she was 65. “I thought I could have a calm life and play with my grandkids,” she recalled. Those who knew her had different ideas.

Even though retirement parties were thrown in her honor and visions of relaxing mornings were dancing in her head, Johnson was asked by colleagues at a nursing home to help out for a week or so when her replacement became ill. Johnson ended up making rounds as medical director for eight more years.

“I tell people how old I am, but they never let me quit!” Johnson exclaimed. The same holds true for friends and neighbors who need help when their own care providers aren’t available. Johnson continues to serve on the Pharmacy Committee at HealthEast, and she spends much of her time reading the stacks of medical journals and newsletters that fill the mailbox of her St. Paul home, where she has lived for more than 50 years and now shares with a granddaughter.

“I’m obsessed with continuing to learn,” Johnson said. “It drives me. … What if I’m out in public and somebody asks me a question? I don’t want to look dumb.”

In between attending monthly meetings of both the Pharmacy Committee and the State Board of Medical Directors, which she has served on since 2002, Johnson does find some time to actually act retired. She walks her Irish Setter, plays piano, goes ballroom dancing when she can find a good partner, and makes trips to her family’s tree farm and cabin near Park Rapids.

But don’t ask her to come out of retirement again. She just might say yes.