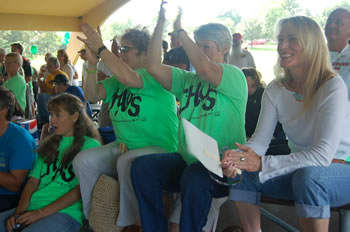 Northwest Airlines flight attendants said a Labor Day rally boosted their spirits as they battle to maintain a fair contract. “We do this on behalf of all labor,” said Mollie Reiley, president of the Master Executive Council for Northwest flight attendants. “We will fight as long as it takes to secure what’s right.”

The workers, who are represented by the Association of Flight Attendants-CWA, are awaiting a ruling by U.S. District Court Judge Victor Marrero on whether they may engage in strike actions. Marrero issued a temporary injunction Aug. 25 until he has the opportunity to rule on the merits of the case.

At the Labor Day rally in Veterans Park near the Minneapolis-St. Paul International Airport, flight attendants said they are ready to launch CHAOS – “Creating Havoc Across Our System” – a series of unpredictable job actions that will disrupt Northwest’s operations. They drew support in their struggle from members of other unions at Northwest and its feeder airline, Mesaba Airlines, and from other labor organizations and elected officials.

“You have given us hope,” said Ken Hooker, president of Machinists Local 1833, which represents about 5,500 ground workers at Northwest. “We will be there to support you.”

The flight attendants are the only remaining group still in negotiations with Northwest. Every bargaining unit has made major concessions and suffered huge job losses to keep the bankrupt carrier operating. Members of AMFA, the Aircraft Mechanics Fraternal Association, have been on strike for more than a year and have seen their jobs outsourced or taken by scabs.

“From our experience, we know what the flight attendants are up against,” said AMFA Local 33 President Ted Ludwig. “This is a very ruthless company.”

Workers at Mesaba Airlines – which flies shorter routes in the Northwest system – also are fighting back against major concessions.

“You can make more money flipping burgers,” she said.

Mesaba is trying to use the bankruptcy court to overturn its labor agreements, just as Northwest did. But Captain Tom Wychor, chairman of the pilots’ Master Executive Council, said the airline faces only two choices – reach a deal with workers or go under.

Several elected officials also spoke at the rally, including state Rep. Keith Ellison, who is running for Congress in the 5th Congressional District. The attack on workers at Northwest “is just the latest threat in a big war against the middle class,” he said. “We gotta stand in solidarity because our lives are at stake. Our prosperity is at stake.”