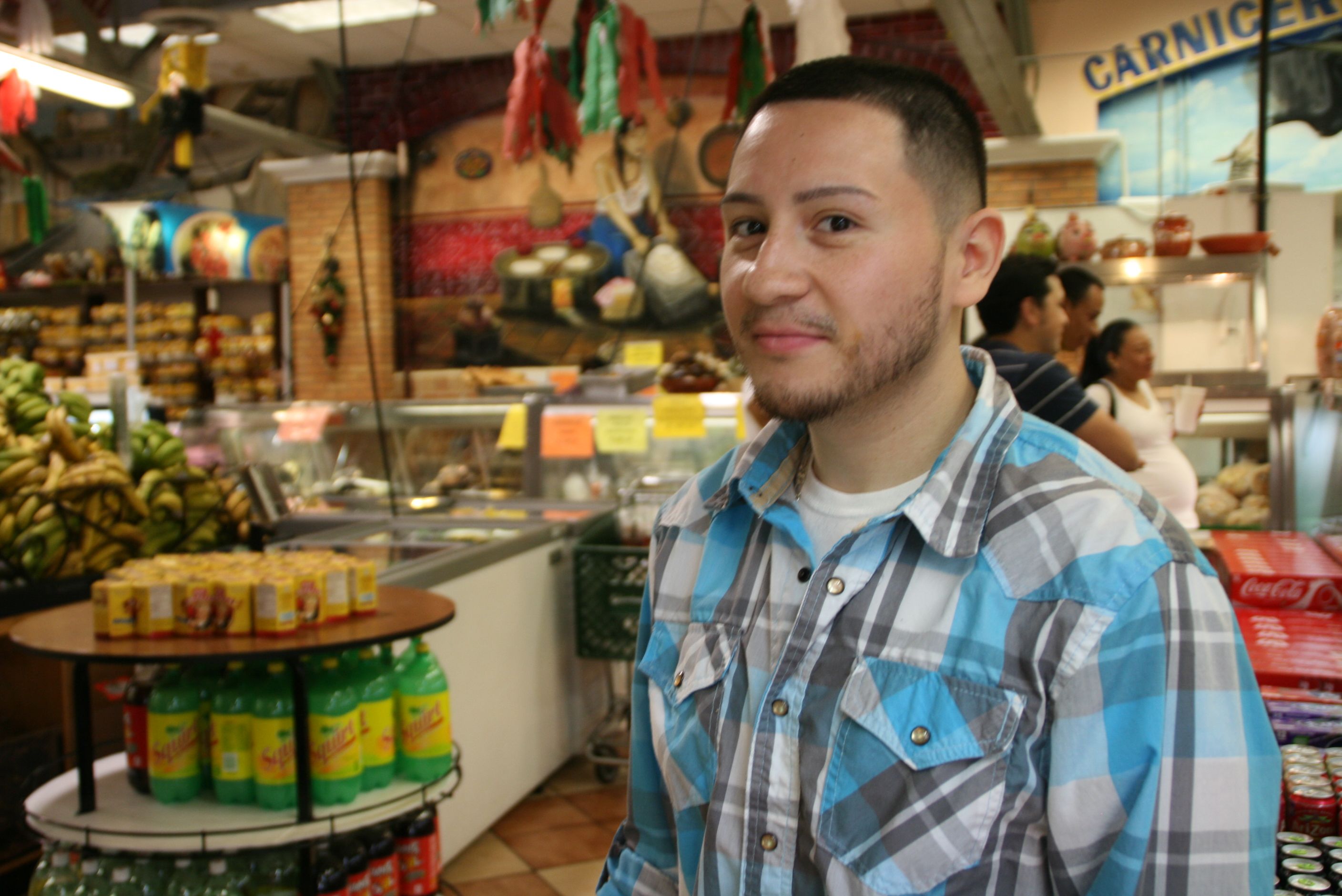 Recently I’ve enjoyed finding new ethnic markets in the Twin Cities suburbs—but with the price of gasoline spiking, I needed to find an ethnic grocery a little closer to home. I headed up Chicago Avenue toward the Lake Street, then turned east keeping my eyes open for some place interesting. That’s how I ended up at La Alborada Market at the corner of Lake and 19th, a mostly Mexican grocery owned by the Cruz family.

The store was crowded and the parking lot filled—both good signs. Coming here, is seems, is an event for whole families, from little kids to their grandparents. The store is a color festival. It’s painted, inside and out with murals and brightly colored signs. Dozens of piñatas hang from the ceiling. The place is fun.

La Alborada is family-run. It was opened in 2007 by Orlando Cruz, Sr., who already owned Los Gallos money transfer service. Sunday was the older Cruz’s day off, but Orlando Cruz Jr. was there, grabbing a quick lunch from the tiny restaurant that’s part of the store.

Cruz (the son) was born in Mexico City, moving with his family to Minneapolis when he was five years old. The store is a hands-on family business, and except for a short stint working retail at an electronics store, the younger Cruz has become a dedicated businessman, learning the business from his dad.

“My favorite thing about working here is that I get to meet new people every day,” he said.  “The meats and the bakery bring customers in. They’re both in-house. We try to keep a little of everything here, but it’s mostly Mexican food.”

The meats include fresh cuts of pork, beef, chickens, and even fresh seafood. You can also get spiced cuts or meat to make Mexican specialties, fresh-made sausages, pig’s feet, and containers of lard. Fresh-baked pastries, sweet and savory, are ready to grab for breakfast or for a quick snack.

Check the freezer for whole banana leaves, frozen red plums, and giant Kool Pops in colors not found in nature. Pick up frozen fruit punch ingredients the next time you make a traditional Mexican ponche de frutas (which can be made with or without alcohol).

While some of the employees speak English, many don’t. Still, they were happy to try to answer my sign language assisted questions. “Is this pepper hot or sweet? [I pretend to bite one and then pant and fan my mouth.]” “Ah! Si! Hot!” The ladies behind the deli counter couldn’t come up with the English word when I pointed to a tray of cooked meat, shaking their heads when I asked, “Pork? Beef?” I made my hands into horns and said, “Meeeeeeh—goat.” They laughed and nodded.

Two very large paintings, one of Mexican revolutionary and working class folk-hero Emiliano Zapata, hang high on the store’s wall. Until last year, a bronze statue of the general, carrying a rifle and wearing an ammunition belt, stood overlooking the store’s restaurant, a gift to the City of Minneapolis from the Mexican state of Morelos. Considered by some Twin Citizens to be too violent for a park, La Alborada gave it a home until the City decided to reclaim it. The statue is now in storage at a public works building a few blocks away. The plan is to move the statue to Plaza Centenario, a public square to be opened sometime this summer.

“A lot of people would come to see it,” said Cruz. “The City told us they were going to put it in a park. But, if they don’t use it, we want it back. It was a big part of our store.”

Even with Zapata gone, groups still come to La Alborada. “Next week a group from General Mills is coming to the store. They come every year but we’re going to try to get them to come in once a month. We may not have Zapata’s statue, but they can enjoy our paintings.”