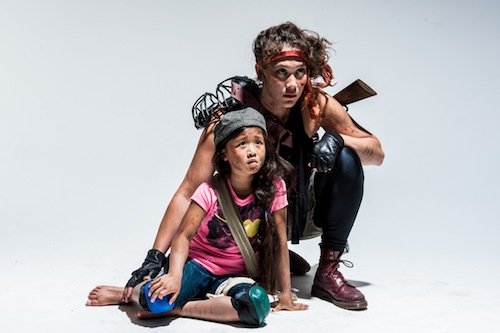 Kung Fu Zombies Vs Cannibals, now playing at the Southern Theater presented by Mu Performing Arts, has all the makings of a Hollywood blockbuster. There’s zombies, Kung Fu and the cutest little girl that would give Dakota Fanning a run for her money during her I am Sam period. It’s not perfect, sure, but it’s an action-packed adventure.

The thrust of the plot takes place in the year 2024. As you might expect in a zombie apocalypse story, there’s been environmental disaster, a loss of power and electricity, where everyone is fighting for themselves. We meet Sika (played by Meghan Kreidler), a tough-as-nails Kung Fu master (she happened to have learned the craft from her principal at De La Salle High School before the end times) who is make her journey to the mountain of Phu Bia to bury her parents’ ashes.

Along the way she meets her rag-tag crew — a little girl (played by Ayden Her) who has secrets of her own, two Americans-turned Buddhist monks (Payton J. Woodson and Maxwell Chonk Thao) and new love interest, Arahan (played by Laura Anderson). They help her as she journeys on her quest for redemption.

This is Saymoukda Duangphaouxay Vongsay’s first full-length play, and it’s a tremendous achievement for the emerging artist. The script needs some tightening up, but there’s a lot there.

My main criticism is that there’s just too much exposition. Why, for example, have a scene between Sika and her sister where Sika talks about her relationship with her girlfriend when you could just as easily have had a scene with the girlfriend herself? That would make the moment where Sika chops off her head because she’s been turned into a zombie (in one of the most brilliant moments of stage campiness I’ve ever seen) that much more awesome.

In fact, the play does best when it embraces its wackiness. Vongsay has a good sense of humor (and director Randy Reyes milks those moments to good effect) and I really wanted to see more of that. When the characters spent too much time explaining the back story, I tended to lose interest.

One of my favorite parts was the cameo by Jeannie Lander, as the evil cannibal priestess named Mara. Lander embraced Vongsay’s over-the-top style and delivered a gloriously malicious performance. I actually wish that she had a bigger part, because she was able to take the show to a higher stylized level.

Underneath the zombie plot, Vongsay was playing with more serious themes- framing the play with the tenet of Buddhism (which worked very well) and using zombies as a metaphor for the bombs dropped by the CIA in Laos, some of which have not gone off. I really like the idea, but somehow it didn’t really totally fit in with the play. Perhaps there was just too much going on, and Vongsay was trying to do too much. In any case, I’m sure all these kinks can be worked out before it gets turned into a move (are you listening Hollywood producers?) In the meantime, you can check it out yourself at the Southern Theater through October 27.