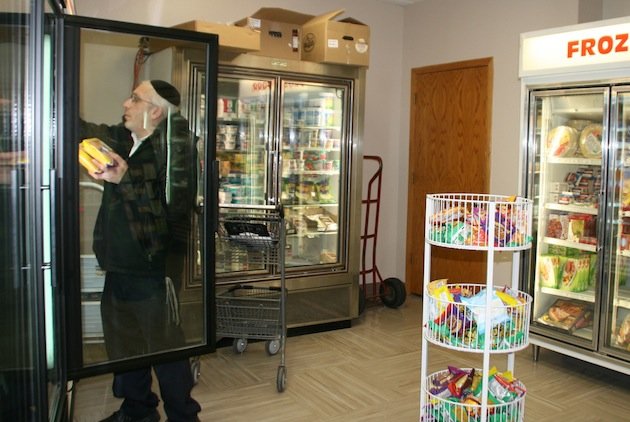 All photos by Stephanie Fox

It’s hard times for old-school kosher restaurants and grocery stores in the Twin Cities. Fishman’s iconic kosher grocery store and deli in St. Louis Park locked its doors in February of 2011, followed by last year’s closing of Twin City Poultry, the area’s only kosher food distributor. Earlier this year, Little Tel Aviv, a popular kosher Middle Eastern dairy restaurant shut its doors as well. A few supermarkets worked to fill in the vacuum, creating or expanding their kosher meat and grocery departments, but there was no place dedicated completely to kosher groceries in the Twin Cities.

Until now. Out of the void has come The Kosher Spot, a tiny neighborhood grocery store located in an unassuming strip mall on Minnetonka Blvd. in the heart of St. Louis Park’s Orthodox neighborhood, next to Elijah’s Cup Judaica store, a half a block from Bais Yisroel Orthodox synagogue and across the street from Bais Yaakov, an Orthodox Jewish girl’s high school.

While the store’s customers are primarily Orthodox and Chassidic Jews –there are men wearing fringes and yarmulke skullcaps and women with long skirts and traditional wigs – everyone is welcome. It’s clear that the owners want their store to be a place where non-Orthodox and non-Jews can pop in for a quart of milk or other grocery items that just happen to be kosher. No one gives a second look to a woman wearing jogging clothes or a man in blue jeans. Everyone who comes in is a friend.

The grocery is owned by four members of the Weinberg family – Moshe, Michoel and Tzipi Weinberg and Meyer Roberts, each putting in their hours working there. The family’s original plan was to open a kosher restaurant in a corner of the mall, but when a storefront just one store down from the restaurant space became available, they jumped at the opportunity. They opened the grocery store in May.

On a Thursday afternoon, one of the busiest times at the store, mother-in-law Debbie Weinberg is on the phone with customers looking for kosher Thanksgiving turkeys. (This year, Thanksgiving is being called Thanksgivukkah, with the first full day of the eight-day holiday of Hanukkah falling on Thanksgiving. This is a rare occurrence. The last time it happened was either 1918 or 1888, depending on which source you believe. The next time this happens will be either 2070 or in 77,000 years.)

“Turkeys are coming in later today,” she tells them. She gives a cheery greeting to everyone who comes in the door. The customers love the place, kvelling about their favorite store.

“It’s small in size, but huge in heart,” says shopper Chana Shagalow of the store. “The owners are the most gracious people you’ll ever know. Anything you need kosher, you can find here. It’s a one stop shop, like back East.”

“If we don’t have it, just ask and we’ll try to get it in,” says Weinberg.

Shopping is a community event. Customers discuss the day’s events and share recipes with Weinberg and each other. Miriam Charney recites the ingredients for her cholent, the traditional slow cooked Shabbat mid-day hotdish. Charney makes hers with flank steak, potatoes, barley, beans and one marrowbone, all available at The Kosher Spot. “And, of course, bay and garlic. You can put in a kishka (sausage), if you like,” she says. She spots a new product on a nearby shelf – a jar of vodka sauce. “I’m so excited about this. It’s the first time I’ve ever seen this kosher.”

The meats are the store’s biggest sellers, says co-owner Tzipi Weinberg. “But, we try to have anything someone might want. We can’t have every brand, but we’re hoping to get a lot of products. We have kosher Swiss chocolate. We have gluten free foods. In the summer, we had fresh walleye. We carry lamb and duck. We’re trying to bring in healthier foods. And of course, we have pickled herring. You can’t have a kosher grocery store without pickled herring.”

The store also carries the makings for sushi, snack-slzed packages of kosher beef jerky, Greek yogurt and other non-traditionally Jewish foods in addition to the matzo ball and Hanukkah latke mixes, cooking sauces, frozen foods, Israeli candies and rugulah. (A note to my editor. The owners and a couple of customers have confirmed that my pronunciation of rugulah – RUG-ah-la – is correct.) “Of course, it depends on what part of Eastern Europe your family came from,” Weinberg said.

The store will be open Thanksgiving morning just in case someone in the neighborhood, Jewish or otherwise, needs to pick up a last minute ingredient.

The Kosher Spot is located at 4217 Minnetonka Blvd. in St. Louis Park. They are open most days from 8:00 am – 8:00 pm. but close early on Friday afternoon and all day Saturday. The family’s yet-to-be-named kosher restaurant should open in the winter or spring of 2014 two doors down from The Kosher Spot.

A customer selects chicken for dinner

Shelves are well-stocked and items are kosher.

Shipments come in almost every day from local distributors or as far away as New York.

Traditional Eastern European food, as well as yogurt and ramen

Thursday afternoon and the store is packed with customers