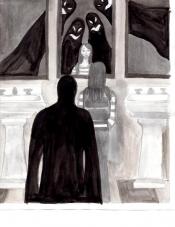 That it includes so much “moving around” — whether watching stairwells, bathrooms, technology centers and outside resources that could influence his school — might come as a surprise to his students.

“The expectations are clear to students that staff is always moving and visible. We don’t ever want a situation where students feel like, ‘Hey, you know, we’re not getting along, so we’re going to fight by room 118 because no one is ever there.’ Or, ‘Let’s get into it in the band hall, or exchange something in the band corridor, because it’s unsupervised. We don’t want any of that,” Bradley said.

“Time is a danger. If we have a limited security staff, if we’re not moving around, if spots go uncovered or unchecked for periods of times, we’re affording an opportunity for (students) to do things that we don’t want done.”

But how can school officials make sure they’re monitoring every place students might gather? They can’t, Bradley said, especially if budget cutbacks limit the amount of supervisors roaming the hallways.

Bradley doesn’t want the responsibility to fall on teachers who are already busy with classes. Instead, he and his support staff make the rounds often, the act of popping their heads past favorite clustering spots hopefully acting as a deterrent.

Maintaining safety and decorum also extends to “smaller rules,” like students taking their hats off in school, Bradley said. “Why do I have to take my hat off?” and “Are you serious?” might be a common reaction from teens as they shed their caps as the school bell rings. But it has a purpose.

“A hat doesn’t make the building unsafe … but the purpose of enforcing smaller rules is that those little things add up to overall safety in a school. If it doesn’t feel different in (school) than it does out there, then the behavior will be the same,” he said.

The same applies to using phones. Technology devices can cause unnecessary conflict if students are texting threats to each other or contacting outsiders to meet them at school for fights or drug deals.

Much of that activity can be funneled to bathrooms, a primary concern for most schools because of the potential for low supervision and “the exchange of money,” Bradley said. Though cameras aren’t an option due to privacy, preventative measures can be taken — for instance, doubling staff presence during hallway passing times or limiting the number of passes issued during a quarter.

“I push for things like a uniform policy of how many bathroom passes a student has,” Bradley said. “Because the more you limit passes, the more you limit excess gathering in the bathroom which leads to more organized students saying, ‘Hey, let’s meet up during fifth period’ and such. What we’ve whittled it down to here is three passes per class, per quarter.”

However, Bradley acknowledged that staff can’t always catch what goes on inside bathrooms. Common problems include graffiti and threats written on mirrors and stalls, vandalism to toilets, marijuana deals and fights. A few years ago at Roosevelt, boys even began issuing body blows to other teens as part of a ritual they devised, Bradley said.

“I want bathrooms to be used for a particular need. Long before my youth, the idea of smoking in the boys room and hanging out … that’s been done for eons. But it’s done because (schools) are lax and don’t want to put forth the structure to eliminate problems,” he said.

Even more daunting: School officials know that what goes on inside schools is just the tip of the iceberg. Cyber-bullying, fights away from campus and bus stop safety are also major concerns.

Speak Up! is a tip-line where students can report incidents anonymously, even if they aren’t part of the problem directly. The tip-line is staffed by trained counselors 24-hours a day.

“When a report comes into the tip-line staff, they contact law enforcement and the impacted youth serving agency when one can be identified,” Young-Burns said. “From there, a plan for response and support is put into place. It is our hope that when youth see adults listening to their reports, taking action and keeping youth spaces safe, trust will grow.”

Speak Up! is anonymous, which helps reduce the potential for “snitching” backlash. The tip-line allows students to feel like they can tell somebody about their problems and not have more conflict or drama result from doing the right thing, Young-Burns said.

Snitching “was certainly part of the thinking behind using a tip-line that is 100 percent anonymous, but for us a more important focus is how it provides a young person with a straightforward way to be a direct part of the solution to keep themselves and their friends safe,” Young-Burns said.

To anonymously report potential violence in your school through Minneapolis Public Schools’ Speak Up! initiative, call (866) SPEAK-UP or text 847-411.