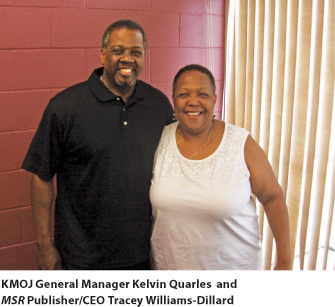 Two local “heritage institutions” are now partners to “promote the positives” of the Black community. A new partnership between “the two giant media in the Black community” — the MSR and KMOJ-FM Radio — was announced last week by MSR President-Publisher/CEO Tracey Williams-Dillard and KMOJ General Manager Kelvin Quarles.

“The MSR always had a desire to partner with another community organization that has similar philosophies on trying to promote positives in the Black community,” explains Williams-Dillard.

“It’s a no-brainer” for the two media entities to join forces, adds Quarles. “The Spokesman is the oldest newspaper in the state targeting African Americans, and KMOJ is the oldest radio station in the state targeting African Americans. It’s strength in numbers — we feel like working with the [MSR] will give us the opportunity to get out there and promote our community more positively.”

Quarles says the idea for a partnership first came up soon after his hiring as station manager eight years ago. “We had an initial conversation, but from our standpoint we weren’t ready on our end.”

“A lot of times people want to be a part of the MSR because it brings strength to them,” continues Williams-Dillard. “But I wanted a partnership where we both share in the beneficial opportunities. KMOJ definitely adds to our efforts, and we have something to offer to KMOJ.”

As a result, Williams-Dillard points out that she and Quarles met earlier this year to see “how together each can enhance the other’s organization while promoting positive-ness in the community.” She notes that there are plans for “cross-promotions” of various kinds, including “identifying the unsung heroes in our community doing positive things” and featuring them both on KMOJ and in the MSR.

“I think it is important to change the perception of people of color in the media,” says Quarles. “Instead of doing this separately, it makes more sense to pool our resources together to really push that agenda.”

Williams-Dillard says it’s important to promote as much as possible the positive aspects of the local Black community, which both she and Quarles note is not done by mainstream media on a regular basis. “There is enough negative news that we watch each and every day that keeps us depressed and repressed. We need to figure out how we as a people can be uplifted, and this is where we come in.”

Quarles says that his station’s website will feature current and archived stories from the newspaper: “We need news in our programming.” He sees the joint venture as a model for other local “likeminded” organizations to forge similar partnerships in the future.

“That’s the main purpose for us coming together,” says Quarles. “I think it gives a [sense of] unification and shows people out there that two organizations in the same field can come together.”