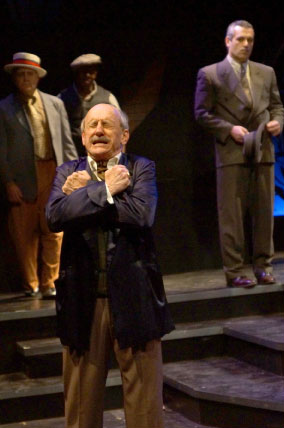 King Lear is playing at Park Square Theatre; it closes Sunday, November 11. I want to get that out quickly because if you’re free, you should think about going. It’s good!

In the Park Square production, King Lear becomes a mafia boss, overseeing his family and crew during the Prohibition. It’s an innovative approach by director Peter Moore; it fits in well with the strong themes of family in the play. The historical setting of Prohibition is less important than the mafia perspective, which brings the story not only into the 20th century, but into a post-Sopranos world, bringing us up to 21st century America.

The language of the play has been altered slightly to fit the modern mafia theme. I think the changes make the play more accessible to younger audiences. The changes sharpen the dialogue, while leaving all of the best lines intact. The bawdiness remains. The philosophy and imagery remain. The play has also been well-edited. We lose some of the stormy descents into madness—but I didn’t miss them. Those scenes are replaced by King Lear shooting at the storm. It makes the point effectively. In fact, guns are used often to help speed the action in several scenes. Funny how a gun can do that.

The shift to modern America also adds a new dimension to the level of brutality seen in the play—and there is some serious brutality. Normally there is a comfortable distance of time between the audience and a play written around 1600. But bring the action forward a few hundred years and give the characters switchblades and guns, and it gets uncomfortably close. The scene where Cornwall (E.J. Subkoviak) gouges out the eyes of Gloucester (Stephen D’Ambrose) while Lear’s daughter Regan (Stacia Rice) giggles is chilling—especially since Subkoviak and Rice seem really to enjoy it.

Speaking of acting…Raye Birk’s performance is stellar. He starts as an entirely unsympathetic egotistical doty king in decline as he embraces the clearly false love of two daughters and disowns the one daughter whose love is true. Then through his physical decline he can finally see beyond himself and gains the sympathy of the audience. I’ve seen past performances where the temptation to play an actor playing Lear is apparently too strong to deny. Birk is not an actor on stage; he is Lear.

This production is home to some excellent and prescient fools. Gary Briggle is excellent as the Fool. He brings in a little vaudeville, a little wisdom, and a little Beckett. His arrival on stage leaves him shoeless and searching for nothing—very reminiscent of the tramps from Waiting for Godot and emphasizing the undertones of nothingness in the play. Nothing comes from nothing. Dan Hopman played Edgar, Gloucester’s older son, who goes into hiding as Poor Tom. Like Birk, he just seemed to become the character; his physical transition from Edgar to Poor Tom helped.

My final words from the Park-Square-King-Lear-admiration club are saved for Amy B. Kaufman’s costume design. The play opens into a swank dance party during Prohibition. The dresses are gorgeous—so gorgeous I wish she had a shop in town. The men’s attire sets the mafia ambience—but more than just being an amazing dress designer, Kaufman’s work helps change the tone from the initial celebration to the spiraling down through storming hell, especially as noted above for Lear and Poor Tom.

Read our coverage of previous local Lears: Cromulent Shakespeare Company (2006), Bedlam Theatre (2009), and the UK’s National Theatre as screened at the Guthrie Theater (2011).