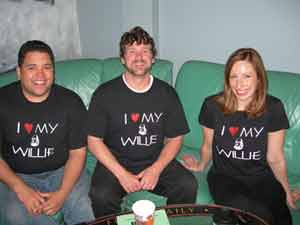 I met Brian Hesser by chance while watching the Pistons destroy the Cavaliers at Adrian’s Bar and Grill in South Minneapolis. Adrian’s is hardly a place where one would expect to encounter Shakespearean actor-types. So when Brian began gabbing (to anyone who would listen, basically) about a production of King Lear he was involved in, his “soliloquy” seemed a bit out of place.

But as the manic thespian expounded upon the subtleties of the play, his theatre company (The Cromulent Shakespeare Co.) and the space the play was to be performed in (a black box in Salem Lutheran church at 28th and Lyndale — in Whittier!), I knew I had to ask Brian for a proper interview. We arranged a meeting and I went back to watching Lebron get his butt kicked.

Brian showed up for the interview with an entourage of sorts. Hesser, who plays Edgar, was accompanied by the play’s director “Duck” Washington and Kathy Kupiecki, a sometimes Cromulent actor who is presently filling in as a production-assistant-cum-bookkeeper.

I started off with the obvious: what does “Cromulent” mean? Washington provided the answer, “Cromulent is a word that derives from an old episode of the Simpsons.” In the episode, a statue of Jebediah Springfield with a quote on it containing the grammatically questionable verb “embiggens” is placed in the Springfield town square. The word “embiggens” is at some point defended as being legitimate by one of Mrs. Crabapple’s peers. She characterizes “embiggens” as being a very “cromulent” word. Washington added that “cromulent” has since made its way into Webster’s New Millennium Dictionary meaning “very good, or acceptable.” Hence, The Cromulent Shakespeare Co.

The history of the company is likewise fairly involved. Cromulent Shakespeare Co. was started ten years ago by University of Wisconsin-River Falls professor, Bucky Faye. According to Washington, Faye set the group up as “a sort of classroom-based theater group” that made use of a lot of swordplay (at Adrian’s Hesser had been pantomiming fencing moves). The company migrated east not too long after it was formed as many of the actors were based in the Twin Cities.

Although Cromulent generally performs Shakespeare, the company will take on more contemporary projects, provided they have a historical frame of reference. For instance, this summer the group plans to perform a piece adapted by Bucky Faye based on the timeless Robin Hood legend. Robin Hood will be performed in eight or so Twin Cities parks. According to Kathy, “We do outdoor shows in the summer every year—usually comedies—and Minneapolis Parks has asked us to do it again so that’s in the plans, but for right now we’re concentrating on King Lear.”

Ah yes, back to King Lear. Washington offered that Cromulent was doing a fairly true version of play, although they had edited it down somewhat to get it under three hours. He maintained that the Cromulent production would be “fast paced.” Evidently, some productions of the play go over four hours. But what is King Lear actually about?

Since I knew next to nothing about Shakespeare’s greatest tragedy, I made use of an old journalism trick and asked Washington to summarize the play in ten sentences or less. He obliged, stating simply, “King Lear is a play of consequences where ultimately Lear’s decisions affect the environment around him and his psyche.” He then described a plot in which an aging king banishes one of his daughters and turns his kingdom over to his other two daughters who then wreak havoc on everything forcing Lear to lose his mind. Real Shakespearean pathos…family style. In one rehearsal scene I got to watch, an actor tied to a chair gets his eyeball gouged out moments before a swordfight erupts leaving several people dead.

As a reflection of the twisted family ties that run through the plot, the set design for the Cromulent production makes use of twisted roots and driftwood. Brian, who is also the production’s set designer, says that all the gnarled lumber inundating the stage is meant to mirror “the parent-child relationships that are in chaos.” Plus, visually the dead wood works well in the black box theater where the play will be performed. And there is an interesting story concerning the space as well.

Cromulent’s King Lear could possibly be the last production to use Salem Lutheran’s basement theater. The church has declared that to remain financially viable it must tear down the aging structure. Needless to say, there is some neighborhood controversy surrounding this decision and a taskforce has sprung up to save the historic old building (more on this in next month’s Whittier Globe). Unless something in the situation changes however, King Lear is probably the last chance the public will have to see a production in Salem Lutheran’s black box theater space.