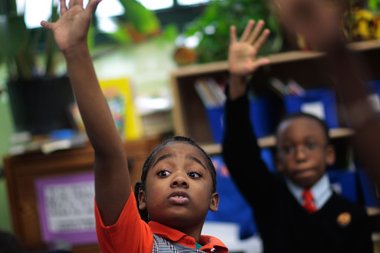 Let me share with you what is possibly the dumbest, and most dangerous thing I’ve heard this year.

While participating on a panel about educational activism another panelist from a nationally known campaign said that “high-stakes standardized testing is forcing teachers to teach to the test,” which is causing students to be bored and misbehave; and, then, “teachers have no choice but to use zero tolerance policies to push students out of school,” which results in the school to prison pipeline.

It was a taut message that this young man has likely used many times. His organization is deeply aligned with national teachers’ unions who have a transparent mission to fabricate in communities of color an idea that links school testing and prison. We are to believe that the “school to prison pipeline” is caused by educational assessments, not by poor school design, culturally incompetent workforces, outdated models of education, and ineffective classroom instruction. That idea requires a level of misdirection that would confound David Blaine.

Unfortunately, this message about the perils of testing is growing. National campaigns with ties to the American Federation of Teachers and the National Education Association are producing endless streams of anti-testing marketing pieces that ask us to believe that the tests are at best inaccurate and promulgated by corporations with a profit motive.

At worst, educational testing is said to be a racist, stress-inducing effort that narrows what can be taught in schools, and destroys education by labeling otherwise fantastic schools as “failures.”

Here’s the bottom-line: educational testing, like dentistry and motor vehicle insurance, is no one’s favorite past-time, but it saves lives.

While teachers’ unions and their many paid ancillary groups assail the supposed “high stakes” nature of educational testing, we are better served by considering what testing reveals, why it is important for us to have that information, and what would be lost if teacher unionist win their war against public accountability.

First, educational testing, like other forms of auditing our public institutions, is a way for the public to examine the actual data underlying an unequal society. If No Child Left Behind did any good it was in disaggregating student data and laying bare the racialized educational outcomes that had previously been minimized.

As a black parent parent, and a black community member who observes history and demands liberation, I need objective data about how my government and my people are doing to address the old struggle for racial justice and social parity. We are a long-suffering people who have learned by experience what double standards can do to create social strife. We know that we have gaps in employment, wealth, law, and health. What we should be clear about is that most of those gaps are born out of the gaps in educational attainment.

And, how do we know about all of those gaps? We know because we have data that comes from audits, assessments, and, yes, testing.

Consider how health disparities hurt us, how they grow, and how we address them. For years the black community held a false assumption about HIV/AIDS. Many believed it was a problem solely in the white community. During that time the black community was suffering from accelerated rates of infection while also having very low rates of testing and diagnosis.

Now, consider this fact from the Center for Disease Control:

African Americans accounted for an estimated 44% of all new HIV infections among adults and adolescents (aged 13 years or older) in 2010, despite representing only 12% to 14% of the US population.

That is not a sentence with statistics. That is a human tragedy marred by lost lives. It shows that ignorance is ultimately the most cruel affliction.

Today we have better data on the problem. We know the size and scope of it and we can intervene appropriately.

So what would happen if someone came to the black community – or any community for that matter -to suggest that we would be healthier if we would stop HIV testing? What if they made the argument that HIV testing was causing doctors to medicate to the test, or narrow their practice of medicine, or spurring doctors to leave the medical profession because they prefer practicing holistic methods of medicine?

Even worse, consider what would happen if we actually took that advice? The result should be easy to predict. Even more black people would die, earlier, and we wouldn’t have much usable data on why.

As absurd as it sounds we are in fact getting that advice about educational testing. We are being told that “the test” itself, not the disparities it reveals, is the problem.

I admit it is tempting to summarily dismiss all of the pushback against testing. But, as fair people we have to at least consider the anti-testing arguments and the concerns about turning schools into psychometric testing mills. Industrialized education is always capable of making the most exciting things boring, and students in an ever quickening, digitized, entertainment addicted world are not great candidates for mundane schooling. It’s true that far too many students are disengaging from school, dropping out, and failing to see the relevance it has in the big picture. Surely we don’t want an education system that aggravates the situation by allowing testing to make schooling a joyless fear factory that marches students in a somber line from one bubble sheet to another.

At the same time, our goals for increasing the percentage of literate and numerate black citizens who are tooled enough to earn a place in the American mainstream economy requires us to hold ourselves and our institutions to account. This is best done with objective and shared information that keeps us aware of disparities, gaps, and indicators of success (or lack of it).

Educational testing done right tells us how our students are situated among all students, how they are progressing (or not progressing); where there are needs for intervention; and how our schools are doing from one building to the next. The tests also predict major troubles in life, including dropping out of high school, need for remediation in college, and persistence on welfare or recidivism in prison. This knowledge is a source of power that illustrates early the educational disparities that show us where to intervene with life-saving care.

What parent would want to be ignorant to the exact nature of their child’s academic health?

In truth, it really isn’t parents who are driving the anti-testing campaign. It’s teacher unionist and the community organizations they pay to blackwash, brownwash, and social justice-wash their agenda so that it looks authentic to the very communities that have the most to lose by “opting out” of educational testing.

Teachers nationally applauded the Seattle teachers when they boldly refused to conduct testing. It was a big, ballsy, and cathartic moment for many teachers who feel student performance on tests and teacher performance in the classroom are unrelated. Twitter feeds and Facebook timelines blazoned with congratulations for the little rebellion. And, of course, Diane Ravitch , Valerie Strauss, and other proponents of dislodging student learning from the vocation of teaching got an online literary case of the giggly piss shivers.

In their less public messages teachers say it’s unfair to judge them on student test scores because those scores are a reflection of the home life, motivation level, race, parenting, and the culture of students. The implication is that students of color who are in poverty score lower on tests because those students are deficient in one way or another. High test scores correlate with white two-parent professional families, and the best way to improve test scores is to outlaw capitalism and abolish poor non-whiteness.

Here in Minnesota the daffy anti-accountability battle has landed too, and teachers’ unions in Minneapolis and St. Paul are attempting to get their districts to opt out of state educational testing. They’re doing so with white middle-class parent allies who are raising their voices to “save” education for their students. Their arguments are not so much about the test themselves, but more about teacher professionalism. In their minds teachers are the real experts on student learning and they should be responsible for the assessments used to judge student learning (apparently they’re psychometricians too).

That’s a slippery argument to make. Teacher grading is subjective and biased from the first day boys and girls enter kindergarden, and from that day forward teachers grade students with white girls as the role model for all. I’ll make no apologies for pointing out the trouble of entrusting the black intellectual development of children to a middle-class workforce of white women and schools that are designed to be pre-feminist gardens for middle-class reproduction. Of the many ways to continue our enslavement that one seems the most needless.

Our reality is one of persistant, discouraging, and vexing disparities in everything from sleep apnea to crappy home mortgage products. Black babies are one and a half to three times more likely to die than white babies.  Blacks overall are more likely to live in unsafe housing in highly polluted areas known to contribute to asthma.

To the extent that we are addressing our problems and improving the numbers of healthy community members, it’s being done with information, education, and advocacy supported by the data and information needed to enforce corrective action.

So beware of the agenda-washers who come appropriately clothed for urban dialogue and carrying a message decrying the supposed inanity of testing. As they attempt to whip up a form of reefer madness on the issue, we must be astute about the play they’re making. Just listen for the insulting subtext in their efforts to “reclaim the promise” of education by removing all accountability and parental choice from it, while demanding we pay more for the boondoggle.

The idea that we can close the achievement gap by erasing the evidence that it exists is deceitful and it threatens lives. Disparities do not close themselves and there is never a time when we are better off with less information about where they live.

For the lives of our children and our people, we need to demand our kids pass the tests – not hide from them.