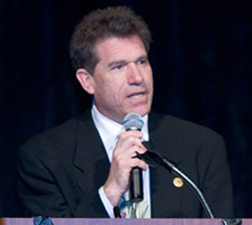 Secretary of State Mary Kiffmeyer is “picking and choosing” which election laws to implement as part of a partisan effort to discourage voters not sympathetic to Republican candidates, her DFL opponent, Mark Ritchie, claimed Tuesday at a Capitol press conference. Her unwillingness to implement certain laws, Ritchie said, would “negatively affect” the September 12 primary election and he called on Kiffmeyer to take action to mitigate the damage.

Ritchie alleged that Kiffmeyer has refused to disseminate information to newly registered voters regarding the types of identification necessary to vote and she has neglected to mention on her office’s Web site or in any of its official publications the new law that makes it easier for residents of battered women’s shelters to vote. Kiffmeyer opposed these bills in the legislature, Ritchie said, and refuses to implement them because they will bring more Democrats to the polls.

“These are laws passed by the legislature to address critical questions in the Minnesota election process and those have not been implemented and there seems to be an unwillingness to implement them,” Ritchie said. “If she wants to legislate, she should run for Congress or the legislature,” he said.

The charge is the latest in a series of allegations Ritchie has raised against Kiffmeyer for playing partisan politics with the secretary of state’s office. Last week, he claimed she was “gouging” small business with outrageous fees and affording Republicans preferential treatment in the candidate filing process. A State Supreme Court ruling last week vindicated her policy in the latter charge and she moved quickly to slash fees in response to the former.

The larger question, Ritchie noted, was Kiffmeyer’s desire to “legislate” from her office, a practice that he said was “very different from upholding the Constitution of the state.”

And her willingness to selectively implement laws tended to discourage from voting people who traditionally lean toward the Democrats rather than Republicans, he said. “The list of those primarily negatively affected have not tended to be part of the Republican base,” he said. “There’s a question about whether these errors of omission are designed to have a partisan outcome.”

Benjamin was particularly concerned about the lack of information about acceptable identification provided members of her community. The band has already prevailed twice in court on previous Kiffmeyer policies, and Benjamin hinted that they may be willing to challenge her in court again. “Today, Minnesota state law is crystal clear,” Benjamin said. “Yet the Postal Verification Cards produced by the Secretary of State’s office are silent on the matter of utility bills and Tribal IDs. Is it too much to expect that she be held accountable for implementing state law?”

Beyond the alleged partisanship, Ritchie stressed that Kiffmeyer’s “above the law” attitude has crippled the relationships between her office and county auditors and election officials at a time when budget constraints require as much cooperation as possible. “That attitude has been one that the county auditors and township officials and town clerks have cited to me repeatedly about the disrespect of them and their work from Kiffmeyer,” he said. “It’s the opposite of the level of cooperation needed.”

With only a week before the primary, however, critics like Ritchie have little recourse in the courts to force Kiffmeyer to correct past practices. “We know from past practice that when somebody points out a failure or an inaccuracy, her office during an election year does scramble to try to address that,” Ritchie said. In this case, he hoped Kiffmeyer would disseminate the mandated information via post cards and on the Web site before Tuesday’s election.