Remember the Premier Cheese Shop on France Avenue, Ken Liss’s tidy little enterprise that won a City Pages “best cheese selection” designation back in 2007? No? You didn’t go there, did you? Would you like to know why it went out of business? Because you didn’t go there. Oh, sure, why go to an out-of-the-way cheese shop when you can outfit your whole snack party at Cub? I’ll tell you why. Because the prices are basically the same, and they give you lots of nice samples, and they talk to you in a friendly, informative way, and it makes you feel like you live somewhere and are somebody.

Now that you’re feeling remorseful about putting Ken out of business, allow me to suggest that you redeem yourself by going directly to Lake Wine & Spirits and stocking up on the same award-winning cheese that you formerly disdained. Indefatigable cheesemonger that he is, Ken teamed up with Binh and Christina Le to run the cheese shop at their liquor store, which opened about a year ago at Lake Street and Grand Avenue in Minneapolis. I dropped in to ask him how the cheese biz is going. 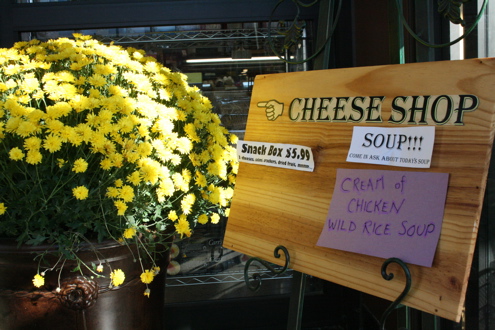 Ken: Before we start, what would you like to taste? I just got in this 12-month-old cheddar from the Milton Creamery in Iowa. The kid who makes it–he’s 19, maybe 20–won first prize twice at the American Cheese Society competition. It’s called “Prairie Breeze.” He also makes a 2-year-old cheddar called “Prairie Sunshine.” 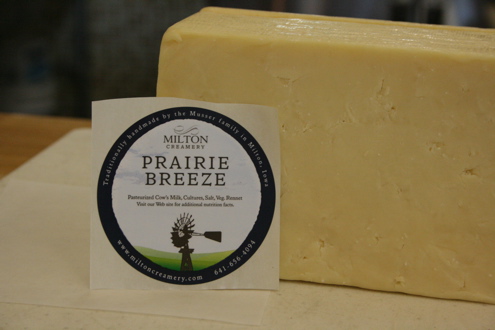 LL:  Since when are cheese names so poetic?

Ken: Oh, these people are amazing. They’re Mennonite, I think, and they only use milk from nearby Amish farms. Excuse me, I’ve got a delivery here from Chicago. This is Carol Carroll from European Imports.

LL: Your name again is…?

Carol: Yup, I met a guy named Carroll and I knew I had to marry him.

Ken: Good a reason for marriage as any, huh?

(Pause for paperwork and hauling boxes of cheese) 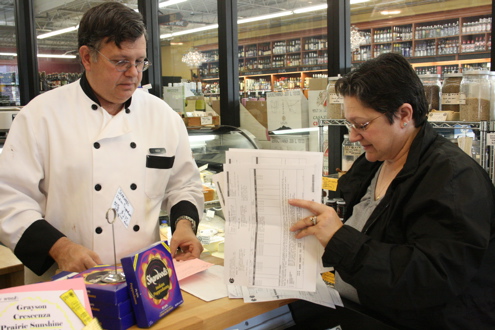 LL: So what happened to Premier Cheese Shop?

Ken; Oh…the economy…you know. My wife and I knew when it was time to call it quits. We got out clean, though. We never took out a loan, so we walked away debt-free. Our suppliers were happy, and I still work with the same suppliers now: European Imports, and Zuercher out of Chicago, and another super-secret Spanish distributor from Chicago, plus lots of locals where I buy direct. 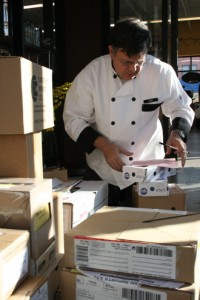 LL: How did you start working with Binh and Christina Le?

Ken: Binh called me when Premier went out of business to see if he could buy my equipment. Cases, refrigerators, slicers, various things. I said it’s all or nothing. He said, work with me. I said no. Six months later, I said fine, I’ll help you set up. Next thing I knew, I was cheese shop manager.

LL: Why the initial reluctance?

Ken: Frankly, I didn’t think this location would work. It’s too far east on Lake Street. But now I see it differently. There’s the ‘hood on one side, and yuppies on the other, and it’s a good combination. We get a lot of Targeteers, I call them, General Millsians, people who work at the corporations. The average age of my customer is down about 15 years from Premier. I love all my customers, of every demographic. It’s fun to teach them about cheese.

LL: What is so gol-danged interesting about cheese?

Ken: Food is culture! Eating is ritual! Humans have made cheese for millennia! Did I mention that I went to grad school in anthropology?

LL: Oh, so that explains it. 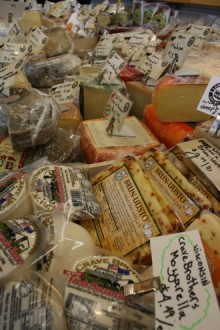 Ken:  I just really like cheese. And whiskey. But it seemed like it would be easier to sell cheese than whiskey. Did you know that there’s a cheese called “quark” that was made in ancient Rome? It’s the predecessor of cream cheese, ricotta, and mascarpone. It’s still made today. Cheese may have originated when a shepherd, thousands of years ago, stored milk in the lining of a sheep’s or goat’s stomach, and the milk turned into curds and whey from the rennet.

LL: That sounds gross, and yet…

Ken: Yeah, cheese is historically just a way of preserving milk. Rennet is still used in cheesemaking, which means that cheese isn’t kosher, although I have some religious customers who studiously ignore that fact.

LL: Did you grow up fond of cheese?

Ken: Well, there was a water buffalo cheese I had in the Philippines when I was a kid. I lived all over the place because my dad worked for Proctor & Gamble, and they sent him to Venezuela, Spain, Costa Rica, the Philippines, and Puerto Rico, where I graduated from high school. Then I went straight into the Naval Academy, and then on to San Diego, Des Moines as a recruiter, Panama, Peru, and Chile. I can’t say I studied cheese in particular, but I was fascinated by food in general. You can read a country’s history in its food.

Ken: I get along. I’m a huge Iberophile. I love everything Spanish and Portuguese, not just the cheeses, which are wonderful. You can see on this shelf, I have a little homage to Spain. 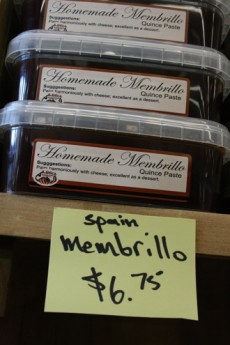 LL: How did your Navy career veer into cheesemongering?

Ken: It wasn’t until I retired from the Navy that I really got into it. I started to study cheese seriously in the 1990s, when Steven Jenkins came out with his book, Cheese Primer. I saw a cheese in there I wanted to try, a Vella dry Jack rubbed in cocoa. So I contacted the Vella company in California and ordered a wheel of it.

LL: The start of a dangerous obsession?

Ken: No, no. Just a strong interest. By that time I was living in Minneapolis, working at the U of M as an advisor. I decided to go to Le Cordon Bleu culinary school in Mendota Heights, I think in 2003. I learned there that I was too old to be a line cook — the pace is just too grueling. So I started thinking more about selling cheese.

LL: The array of cheeses here is overwhelming. How do you begin to advise your customers?

Ken: The concept at Lake Wine & Spirits Cheese Shop is this: You’re having a cheese party; what do you need? We can make you an entire plate to go if you want, or you can concoct your own. I’ll tell you what to put on a cheese plate. Ready? 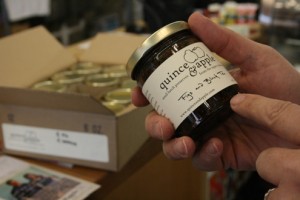 Ken: It all depends on your taste, but there are some classic pairings. Blue cheese with honey is another one. Oh, and you’ve got to taste this: it’s just a simple Parmigiano-Reggiano, but if you drizzle some balsamic on it, angels will sing. I’m not kidding. 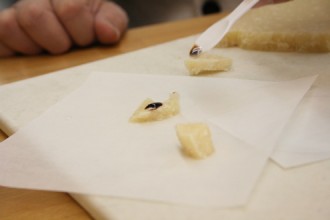 LL: How do you know how much cheese to put on the plate?

Ken: Figure about two ounces per person. So if you’re having 10 people over, then 20 ounces total. You need three cheeses on the plate: a soft cheese like brie or chevre, a hard cheese like cheddar, manchego, gruyere, or gouda, and a blue of some sort, depending on how strong you like it. Put the soft cheese at the six o’clock position on the plate and then go clockwise. When you get to the blue, your tasting is done. You can’t really taste anything else once you’ve had the blue. 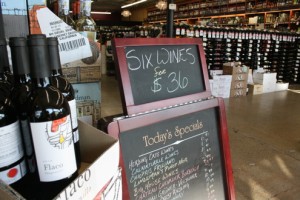 LL: And how do you know what wine to serve?

Ken: Totally a matter of taste. You can actually get an app that tells you what wine to pair with what cheese. But some people say beer is the best drink to have with cheese, because they’re both made from grass! I mean, beer is made directly from grass-like plants, and cheese is from grass via the animal that eats the grass. Sake is also good, because it doesn’t have tannins that interfere with the cheese taste. And whiskey, of course. Bourbon with aged gouda is a beautiful pairing.

LL: Do you have any particular favorites? 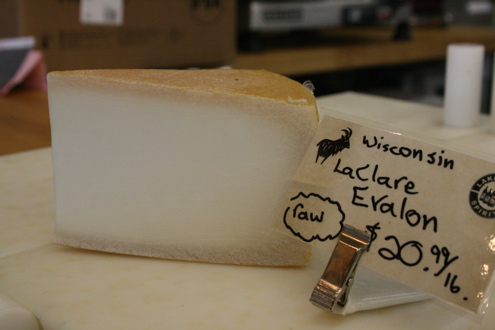 Ken: It depends on the day. I love this LaClare Evalon. It’s a raw goat’s milk cheese, and it just won the US Cheese Championship. The cheesemaker is really young, like the Milton kid–I think she’s about 25. Amazing. Did you know that raw milk cheeses in the US can’t be sold till they’re over 60 days old? That’s why you can’t get the nice gooey raw cheeses like in France.

In general I love Swiss Alpine-style cheeses, like gruyere and this Ascutney Mountain. Sometimes when I get home late from work, I just have a hunk of this with some bread for dinner.

LL: Is cheese kind of like a religion for you?

Ken: No, but I have a religion joke. Want to hear it?

Ken: So, the Pope is sitting in his office, and he gets a call. “Pope, this is God.” The Pope is stunned. “God, to what do I owe this honor?” God says, “Well, I have good news and bad news. What do you want to hear first?” Pope says, “I’ll take the good news.”

God says, “I’ve been thinking about how I created human beings, and I think I made one mistake. People all over the world are fighting about religion all the time. They’re always saying ‘in the name of God’ this, and ‘in the name of God’ that, but they’re not paying any attention to what I actually want. So I’ve decided to correct this mistake. I’m going to decree that there’s only one religion for all the world.”

Ken: Oh, I’ve got more where that came from. 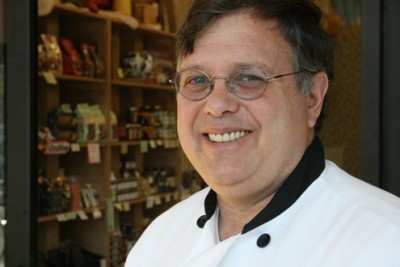