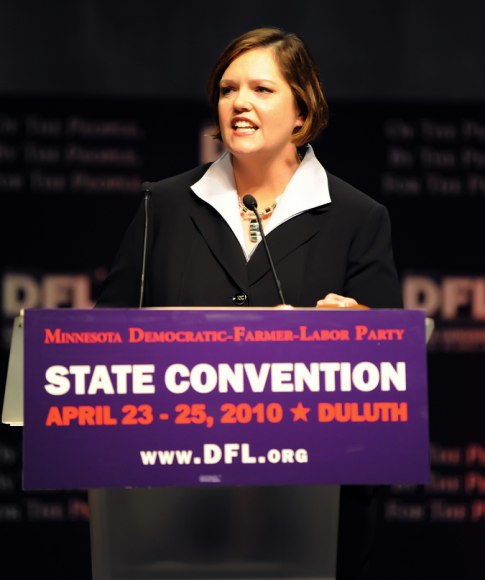 Coming into the DFL State Convention, it was hyped that a progressive group called reNEW Minnesota would throw its weight behind one DFL gubernatorial candidate to push them over the top. But the group couldn’t choose between their three supported candidates and opted not to vote together. Instead an old-school political force showed its strength, as labor supporters facing the choice between labor-friendly Margaret Anderson Kelliher and R.T. Rybak, who has taken heat for his relations with Minneapolis unions, flocked to Kelliher to win her the DFL endorsement.

For an underdog candidate, Rukavina garnered passionate support from a statewide union, locals and members of unions that didn’t officially endorse a candidate, even snagging a late endorsement from former Minnesota AFL-CIO President David Roe.

“I think I got a huge percentage of the truly uncommitted delegates, a lot of whom were labor,” Rukavina told the Minnesota Independent. “Organized labor, like the building trades and the teachers in particular, just let their people decide how to vote and I got a lot of those votes.”

The Communication Workers of America (CWA) Minnesota State Council endorsed Rukavina in January. Minnesota CWA President Tim Lovaasen told the Minnesota Independent that the convention pretty much came down to Rukavina’s endorsement of state House Speaker Margaret Anderson Kelliher when he dropped out.

“When Rukavina pulled out and threw his support to Margaret, well that’s when [union delegates] all said, ‘OK, we’ll go that way then,” Lovaasen said. “Tommy doing what he did gave Margaret this tremendous momentum – no one was going to catch her after that.”

Rukavina said an unprecedented number of his delegates threw their support behind Kelliher after he dropped out and endorsed her: 82 percent of Rukavina supporters shifted to Kelliher’s side, according to delegate ballots.

“She understands the ‘F’ in Farmer and the ‘L’ in Labor a little better,” Rukavina said of Kelliher and her relationship to the DFL acronym. “They’ve trusted me and trusted in who I considered was the best candidate – and most of them went with her.”

The impetus to flock to Kelliher also came partly in reaction to strong distrust of Minneapolis Mayor R.T. Rybak after unions tangled with the mayor as he sought to cut back Minneapolis spending. Rybak only received the endorsement of Teamsters Local 120, but opposition on the convention floor to Rybak by union affiliated delegates was tangible.

“Those unions and people sympathetic to those unions within the labor movement were going to go with Margaret and not R.T,” Lovaasen said.

One out of every four chairs at the DFL State Convention this weekend was filled by delegates affiliated with organized labor.

“I think we made up a good chunk of it, we weren’t a majority, but we were definitely a factor out there, just like we’re a factor in the general election,” said Lovaasen, who attended the convention. “Even with waning membership there’s a lot of people who are sympathetic with what the labor movement has done, has stood for, and tried to do for working people.”

Even with the convention’s strong labor support backing her, Kelliher now heads into a potentially bruising August primary against well-financed opponents, former US Sen. Mark Dayton and Matt Entenza, both of whom skipped the DFL endorsement. Dayton also has strong labor support, including AFSCME Council 5.

Lovaasen said it’s likely that many unions who endorsed candidates like Rukavina will stay out of the primary fight.

“We’ll see what comes out of that and whoever that candidate is after the primary, I would suspect that the whole labor movement is going to get behind that primary,” Lovaasen said. “It would be better if we didn’t have three strong candidates – two of them have got money and the other one has got the endorsement.”