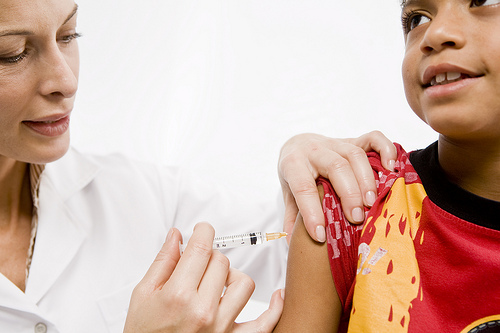 Some rights reserved by Sanofi Pasteur

Whooping cough epidemic. Record low vaccination rates. What is happening to the health of Minnesota’s kids? And what can parents do?

Minnesota is seeing a whooping cough — pertussis — epidemic, with 2,367 reported cases so far in 2012, a three-fold increase compared to the same time last year. Though there’s a vaccine to prevent pertussis, record numbers of new cases are being reported across the country.

The current outbreak is being blamed on a combination of factors; more parents choosing not to vaccinate their children, adolescents and adults who have not received a pertussis booster, and the natural variation of pertussis outbreaks.

Dr. Peter Dehnel from the Children’s Physician Network said, “ It’s the teenagers and adults right now maybe who haven’t gotten their pertussis booster who are now providing the biggest source of the disease to younger children and infants.” Many young children have not been vaccinated yet or parents are choosing to delay vaccinations. According to Dr. Dehnel parents against immunization often say, “I would rather have my child get the disease. That way they will have a natural immunity, but 1% of children less than six months of age will actually die from pertussis. It’s a really bad disease.” In babies the disease seems to be especially virulent and can lead to pauses in breathing (called apnea), pneumonia, neurological side effects, and even death.

In Minnesota the rate of child immunization has consistently fallen within the 80 to 85 percent range, according to Claudia Miller at the Minnesota Department of Health. This rate refers to vaccines immunizing against diphtheria, tetanus, pertussis; polio; and meningitis. The goal is to reach 90 percent coverage. Minnesota was ranked 44th in the nation for child immunizations, according to the results from the 2010 National Immunization Survey released in 2011. However, a national shortage of a Hib vaccine product particularly used in Minnesota skewed the results of that year’s survey, Miller said. She suggested that the percentage of coverage is a better indicator of child immunization in Minnesota.

Barbara Babbitt, a nurse at the New Family Center in Minneapolis, meets with students for whom English is not their first language. The center, she said, helps families choose a school within the Minneapolis public school district. It also provides vaccinations. “Families are generally open to getting what are required to be in our schools,” Babbitt said, referring to required vaccinations.

While MN schools do require documentation that a student has received the required set of vaccinations, parents are able to sign an exemption form based on personal objections. By signing the form parents understand that they may be endangering the health or life of their child and/or other children.

“We have found in the past and currently some resistance in the Somali community to getting the MMR because of failed science,” Babbitt said. A study that supposedly found a link between autism and the MMR vaccine was later found to be false. She added that in the Somali community, “I’m not seeing as much refusal now as I did a few years ago. We see it occasionally still, but really not as much, and I really think that is because that people have been speaking and educating the Somali community on it.”

A recent article in the Pioneer Press suggested that middle-class white families are more likely to refuse immunization than immigrant or minority families:

“A growing number of Minnesota parents — mainly white, middle-class and college-educated — are choosing not to vaccinate their children. They question the necessity of vaccinations, the chemicals in them or the number of shots given in one sitting. And their skepticism worries doctors and public health officials, who warn that even a few unvaccinated people can spark an outbreak of a highly contagious disease such as measles.”

When children are not vaccinated, the effects go beyond their immediate families. A 2009 Minnesota Department of Public Health report explains:

Herd immunity is achieved when the vast majority of the population is immune to a disease; the infectious agent cannot readily spread in a highly immune community. Those who are susceptible to the disease will be protected by the immune people around them. This is called herd (or community) immunity. With herd immunity, vaccinated people help those who do not or cannot receive a vaccine by reducing the likelihood that they will come in contact with an infected individual. A small number of people cannot be vaccinated (e .g ., those who are immunocompromised) and a small percentage of people do not respond to vaccines. These people are susceptible to disease; their only hope of protection is for the people around them to be immune – meaning they will not pass disease to the unvaccinated.

“I don’t like my kids being sick, and I will do what I can so that my kids won’t be sick,” said Karen Ernst of St. Paul, a mother of four boys, including one stepson. Ernst said that deciding to have her children vaccinated was an easy decision. When her first son was born, she explained that the internet did not have the mass of inaccurate information about vaccines that it does today. “The moment they go on Google,” Ernst said about parents seeking information on vaccines, “they are inundated with stories, and it’s overwhelming for new parents to parse through it all.”

When Ashley Shelby’s first child was born, the study that claimed to link the MMR vaccine with autism had not yet been proven fraudulent. Shelby, from Hopkins, worried and turned to the internet for help. As she combed through the internet, she came across a large amount of information about vaccines, much of which was untrue. The result, Shelby said, is that she became infected with fear. “But as I continued to do my research,” she said, “I realized that the diseases that these vaccines prevent are awful and could kill my child. Do I want to make a decision based on fear, or do I value my child’s life enough to trust the science that shows that these vaccines are safe and effective?”

Dr. Deborah Wexler, executive director of the Immunization Action Coalition, said that parents should talk to their doctor about their concerns because of the “scary” information on the internet. “Vaccines are safe. They’re effective,” Dr. Wexler said. She added, “There are a lot of really terrible things that can happen as a complication of a [vaccine preventable] disease.”

As part of the effort to combat the fear of vaccinations, Shelby and Ernst started a blog called Moms Who Vax. The blog is a resource for parents looking to learn more about vaccines and for parents to share their stories about how vaccines have helped their children. Parents’ concerns are natural, Shelby and Ernst said, and they want to help parents obtain accurate information. “We’re trying to prevent parents from being infected by fear and making poor decisions,” Shelby said.

Often parents have concerns about how vaccines are made, what’s in them, and the number of vaccines given at a time, Ernst explained. “They think the ingredients are toxic. It’s probably the least toxic thing the kid encounters every day.”

Through the blog, parents also share stories of how their own decisions or the decisions of others not to vaccinate affected family members, including children medically unable to be immunized or young infants. One young infant, still too young for vaccinations, became seriously ill with whooping cough, which her sister may have brought home on her clothes.

Shelby calls the percentage of parents that vaccinate their children, the silent majority. Said Ernst, “We want to be that voice out there and reassure parents of the most common story out there: the majority of parents get their kids vaccinated, nothing happens.”