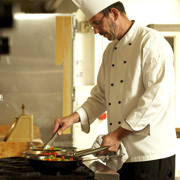 Connecticut’s business lobby, the Connecticut Industry and Business Alliance, predicted a sky-is-falling consequence should the legislation pass. Yet, roughly two hours after the final State House vote, the sun rose in an unaffected sky.

Here in Minnesota, Jimmy Johns workers, trying to organize their workplace, raised the sick leave issue. Scheduled workers are responsible to find a replacement, even if they’re sick. Consequently, a great deal of food is prepared and sold by workers who maybe should be spending the day in bed.

In his statement hailing the bill’s passage, Connecticut Governor Dan Malloy cited this specific situation. “Why would you want to eat food from a sick restaurant cook? Or have your children taken care of by a sick day care worker? The simple answer is—you wouldn’t.”