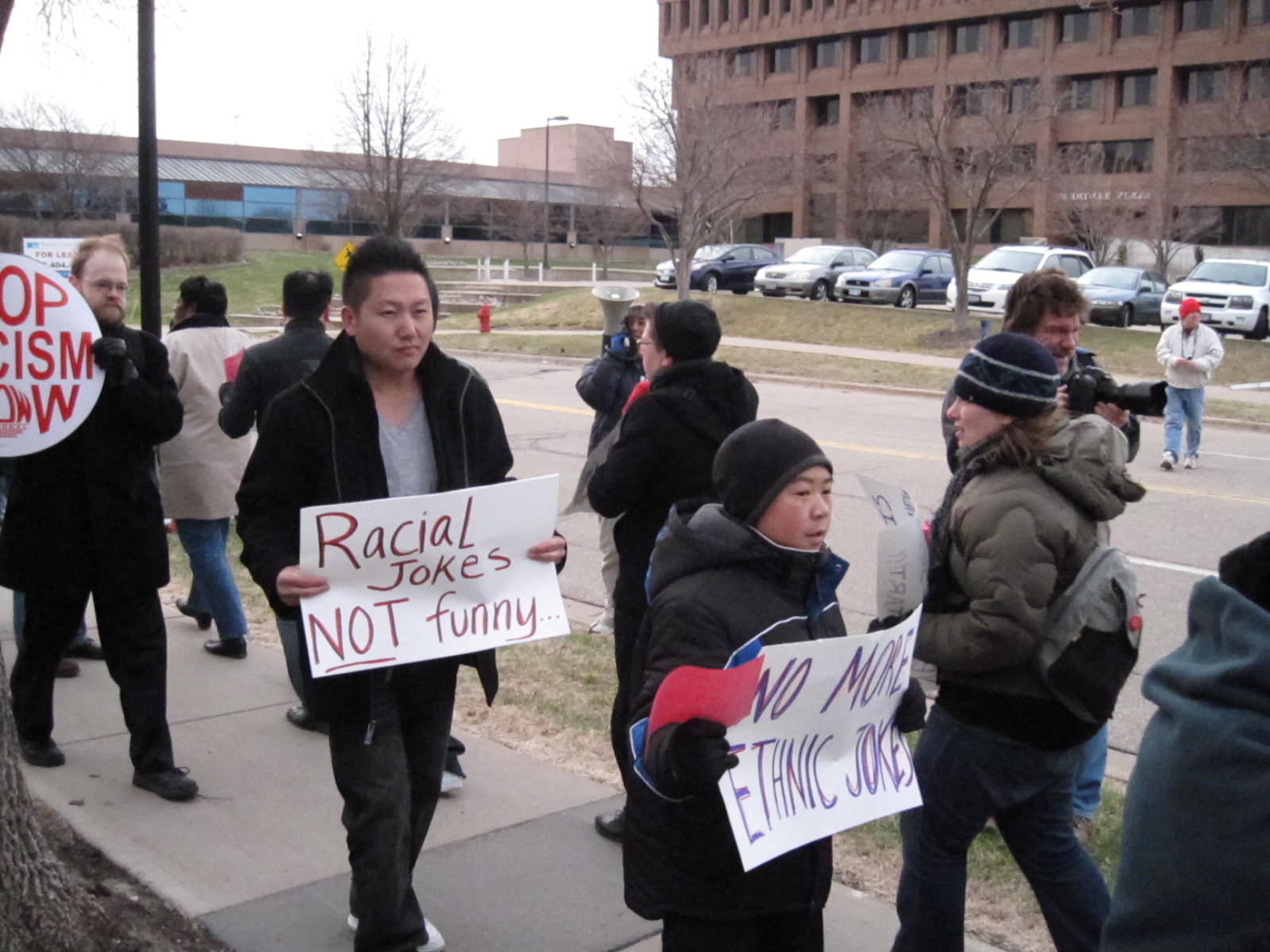 Protesters, such as those who marched outside KDWB offices in April, were not welcome at recent KDWB meeting. (Photo by Sheila Regan)

After weeks of controversy over its “Hmong parody” song, denounced as racist and demeaning by protesters, KDWB scheduled a meeting with what it called Hmong community leaders on May 4. The meeting was by invitation only, and the unidentified leaders were selected by KDWB. Organizers of Hmong protests against the radio station said they did not attend the meeting and did not know who was present.

Boa Lee, a member of Community Action Against Racism (CAAR), said that it seemed that KDWB was trying to exclude the community. CAAR organized protests against “30 Hmongs in a House,” which it calls “a blatantly offensive, inaccurate and racist song about Hmong families, women and teenagers.”

CAAR had invited KDWB to send representatives to a community meeting on April 30 (PDF below), but received no response and was not invited to KDWB’s May 4 closed-door meeting. One CAAR member, Amee Xiong, was invited, as a representative of Take Action Minnesota/CAAR, but was told she would be the only person allowed to attend and that no cameras or recording devices would be allowed. After discussion in the April 30 community meeting, Xiong declined the invitation.

A CAAR press release on her decision said in part:

“The decision to not attend today’s meeting came after consulting our supporters and other organizations that had also been invited to the May 4 meeting,” said CAAR Communications Chair Boa Lee. “We operate with full inclusion of the community and the community has said that KDWB needs to come to us.”

We are grateful for all the time that these individuals have devoted to working with KDWB in a respectful and collaborative manner and we are very pleased with the progress we are making.

Bettison said that she could not identify the leaders involved in the meeting. She also could not say what “progress” they were making or what the reconciliation process was.

Asked to comment on Bettison’s statement, Lee said, “It sounds to me like they are picking and choosing who they talk to, and that goes against what they tried to tell us about being inclusive and reaching out to all members of the community. For them to exclude a multiracial coalition is detrimental to the process of resolution.” She said she did not know who attended the May 4 meeting, but knew that CAAR, Take Action Minnesota, State Representative Rena Moran, and Hmong 18 Council did not attend.

Moving forward, some requests that CAAR will consider are the following: KDWB/Clear Channel must implement rules to punish – reprimand with suspension or termination – anyone who airs something that violates the aforementioned company policy. We want to increase the diversity of people who work at the radio station. We want current and future staff at the radio station to undergo annual diversity and/or white privilege trainings. We want the station to work with us to craft a public statement of these changes and one that also acknowledges they recognize the harm inflicted with the March 22, 2011 song. We want the station to devote airtime to accurately and fairly educate listeners about the diverse communities in Minnesota, especially the Hmong.

Late on Sunday, May 8, Hmong National Development, Inc. issued a press release saying that they had met with KDWB on May 5 because, “As a result of low attendance at the May 4th meeting, KDWB and Clear Channel reached out to HND to meet again on Thursday, May 5, 2011.” According to the press release:

Given the low attendance at the May 4 meeting, HND accepted the invitation and agreed to meet with KDWB for the purpose of listening to what representatives from KDWB and Clear Channel had to share. HND did not engage in any negotiations on behalf of the local Hmong community, nor did it make any demands or recommendations to KDWB. HND clearly stated at the meeting that they were not in attendance to represent the local Hmong community and highly encourage KDWB to meet with various groups in the community. …

On April 27, over ten local Hmong organizations held a meeting at Hmong American Partnership and formed a Hmong Coalition to work on this issue.  Hmong 18 Clan Council was appointed as the lead agency and we look forward to their leadership.

HND characterized the May 5 meeting as “very productive.”