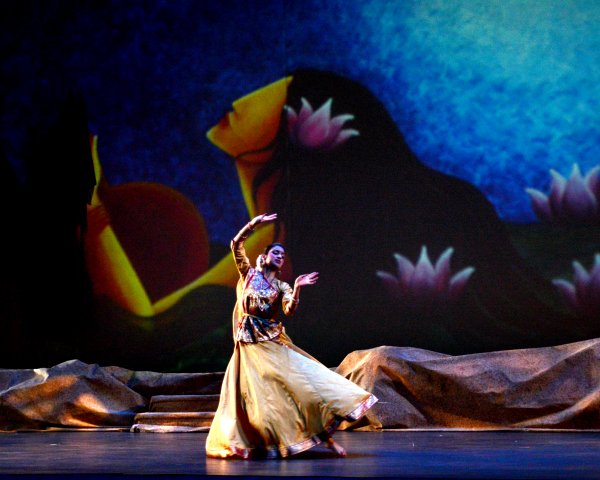 “Karna. Do you know of Karna?” the audience is asked, as the curtain pulls back on the first act of Karna, the Abandoned Hero at the O’Shaughnessy Theater at St. Catherine University. The story of Karna comes from the Sanskrit epic Mahabharata and features a fascinating cast of characters, from a queen who comes to admit that she is Karna’s mother, to Krishna, the incarnation of Vishnu, who comes to ask Karna for peace. Bringing these characters to life is the Katha Dance Theatre and three powerful gospel singers, as well as visual artist Deb Sree.

The world premiere of Karna, The Abandoned Hero is truly a global experience. The show is an ambitious blending of art forms and cultures with beautiful costumes and powerful music. The music was composed by J.D. Steele, who also provided a portion of the vocals. This gives the vocal performance a strong gospel quality, though it is often sung over the music of traditionally Indian instruments. Gretchen Baglyos Reed and Robert Robinson, also both talented and practiced vocalists joined him on stage. Together they both narrated the story and gave voices to the characters as they danced across the stage. The dancers of the Katha Dance Theatre brought the characters to life through Kathak dance, a traditional dance style from India used to tell stories through hand gestures and facial expressions.

The backdrop to the dancers is a projector, on which is shown the paintings of Deb Sree, an artist from India whose visual art adds another layer of emotion to the themes being played on the stage. As Kunti sings that she is the mother of Kunti and they are reunited the picture behind them is of a mother with her baby. As Kunti sings of her youth, a painting of a maiden appears, bringing more power to the words that are being sung. All of this comes together to show the incredible thought that went into every aspect of this show.

The staging of this performance was masterful, with the stage split into a high and a low area. When the chorus sings of Karna, he stands above them, though he is not yet present. When Kunti, the queen, sings that Karna is her son and tells him the story of his birth, they look down at her younger self as a princess making the terrible mistake of asking the sun god for a son before she is married. At times the older queen even mimics the moves of the young princess, as if reliving those memorable moments. Krishna ends the performance on the higher ground, as Karna stands below him, ready to accept Krishna’s gift, the immortality that can only be given to a true hero.

In places it almost seems as if this project was too ambitious. It occasionally feels as if the music is somewhat out of synchronization with the dancing and out of place with what is happening on the stage. There is sometimes too much information to be shared with the audience, and it becomes rushed and overwhelming. Without knowledge of the story beforehand, it is easy to get lost in the plot and what is occurring, and it becomes necessary to refer to the program synopsis for what is happening on stage. The necessity to condense a part of an epic into a performance of an hour and a half has left the show with a feeling of being too short and out of context. Still, for its beauty, and its interesting and exciting goal, it is to be hoped that Karna, the Abandoned Hero is able to bloom into its full potential. It is rare to see two cultures blending together to such a lovely effect.