Sometimes when they argued, Kelli Doublin’s boyfriend would say, “You’re lucky I’m not like the guy I used to be.”

Only later, as she prepared to testify against him in court, did Doublin find out what he meant.

One day in April 2009, after yet another argument, Doublin told her boyfriend she couldn’t live this way. He snapped. Doublin’s boyfriend of three years hit her across the face with an iron, breaking her nose.

It was the first blow in an attack that would last five hours.

“Spitting on me, kicking me, stomping me, strangling me, punching me,” Doublin said, recalling the abuse.

At one point, Doublin’s boyfriend dragged her into another room and raped her. That night, Doublin lay awake next to him as he slept. At 5 a.m., she snuck out of bed, turned on the shower, dressed and tiptoed out of the house.

Doublin’s relationship with her abuser ended that morning, but her ordeal was far from over.

The services that helped Doublin pay medical bills and provided a night in a shelter and months of therapy now face steep cuts in the Minnesota state Legislature.

The public safety omnibus bill, as passed in the House of Representatives, includes a 17.5 percent cut to the Office of Justice Programs, which funds women’s advocacy groups and battered women’s shelters.

In a time of budget crisis, the state’s Republicans are working to craft a tighter, cheaper plan for state spending. As the new budget is ironed out, some programs find themselves caught in the creases – pinched, if not crushed altogether. Legislators say they are dealing with tough, temporary budget conditions, while advocates say the cuts would hurt the most vulnerable Minnesotans.

Rep. Tony Cornish, R-Good Thunder, said the state had been funding programs that misspent money, including excessive executive compensation. Cornish pointed out that the House bill capped cuts to women’s shelters at 11 percent, and rejected claims that the cuts were insensitive.

“I don’t feel it’s insensitive at all,” Cornish said. “We’re trying to tell these people, ‘Get a clue, deal the money right and then you might have enough to go around to the right people.’ But you’re hurting people doing it the haphazard shotgun way that they are.” 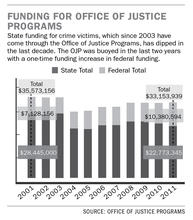 Gov. Mark Dayton’s budget, released Feb. 15, recommended not only full funding to the OJP, but a slight increase from the previous budget. The OJP had received $68 million over the past two years; Dayton sought $71 million for the next two.

This number was too high for the Republican-controlled Senate, which passed a public safety omnibus bill March 29 that dropped the number to $65 million. Two days later, the House passed its version, which came in with $56 million for the OJP – well under the Senate’s version, and a full $15 million below Dayton’s budget.

With 40 full-time staffers, one of the OJP’s largest roles is to act as a clearing house, taking in tens of millions in state and federal dollars, which are then doled out to programs across the state.

With about 450 separate grant awards, the OJP funds more than 140 different agencies each year, including many battered women’s shelters and women’s advocacy groups. Executive Director Jeri Boisvert said she could tell cuts might be coming when she testified before the House Public Safety and Crime Prevention Policy and Finance Committee in March.

“There was a specific line of questions around a couple of issues around the battered women’s shelters,” Boisvert said.

The questions regarded nonprofits that held budget reserves and the executive compensation of nonprofits. 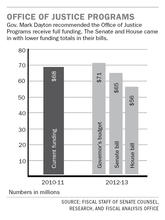 The person asking the most – and the most pointed – questions was Cornish, the chairman of the committee. In an interview last week, Cornish said the OJP had not been discerning as it gave out funding.

Cornish also raised the issue of excessive compensation, citing several nonprofit executives who receive six-figure salaries. He said that it was not a convincing argument when nonprofits claimed that executive salaries were not paid with state money.

“Every penny they spend is a potential state funding, or that much less they’d need if they weren’t overpaying their directors, which they are,” Cornish said. “I don’t think a director deserves that much.”

Boisvert said that the OJP employs grant managers, each of whom is responsible for closely monitoring around 30 grants. Through collecting financial documents and visiting sites, Boisvert said the office is able to keep tabs on grantees. In recent years, she said, grantees have been found failing, either in operations or how they handled money and lost their state funding.

In the course of one violent day, Kelli Doublin’s relationship shattered. After police arrested her boyfriend, they continued interviewing her. Also arriving on the scene was Bree Adams Bill, an advocate with St. Paul Intervention.

Adams Bill invited Doublin to come to St. Paul Intervention, where they talked about getting her out of her lease and how Doublin – who believes she did not have insurance at the time – could pay extensive medical bills for her broken nose, concussion and sexual assault nurse examination.

She also spent a night at Anne Pierce Rogers Shelter, which is run by the Harriet Tubman Center. Tubman, which has 128 shelter beds in the Twin Cities metro area, receives more than $3.5 million from the OJP. A small portion of this money is for legal advocacy, but the vast majority goes to in-house services at its shelters.

Tubman’s executive director, Beverly Dusso, said the shelters are typically 95 percent or more full, and 45 percent of its occupants are children. Dusso said that the shelters’ doors will stay open, but could mean cuts to its therapy and advocacy services.

“The number of hours … those professionals can physically spend with the client working on them is going to go down by, I’m going to guess, 10, 15, 20 percent,” Dusso said, imagining a 17.5 percent cut to the OJP.

Doublin went on to testify against her boyfriend who, she found out, had a pattern of domestic assault arrests in his past. During her two-hour testimony, Adam Bill sat in the front row, right next to Doublin’s parents.

“When I was just struggling to get through, I looked at Bree,” Doublin said.

Doublin’s boyfriend eventually pleaded guilty to the assault and received a nine-year sentence.

Lt. Bob Kroll, domestic assault unit commander for the Minneapolis Police Department, described seeing many cases similar to Doublin’s. He said that often, domestic assault victims are reluctant to testify against their abuser, who they may still see as a source of love or financial support – or a threat.

“A big hurdle we have is getting cooperation from the victims,” Kroll said. “If we run into those hurdles, a lot of times the advocate can get them to cooperate.”

Kroll said advocates are a constant presence in police offices, where they search for victims who need services.

“They come in every morning,” Kroll said. “They go over all the cases, and they try to make contact with all of these victims.”

Kroll said one of the most difficult aspects of domestic abuse cases is that, as in the case of Doublin’s boyfriend, many of the abusers are repeat offenders.

“There’s not many success stories, shall we say,” Kroll said. “Domestic abuse has a high level of repeat offenders.”

One organization which has set about changing that is the Domestic Abuse Project, a Minneapolis-based advocacy group. Aside from reaching out to victims, DAP provides therapy programs, the majority of which are geared toward male abusers.

Executive Director Carol Arthur said when DAP was founded in 1979, it was designed to deal with both abuse victims and abusers themselves.

DAP receives 12 percent of its funding from the state and employs eight advocates, who deal with 3,600 victims per year. Its nine therapists treat a total of around 800 men, women and children each year. According to its follow-up studies, 92 percent of DAP’s male clients are not arrested for abuse in the year following their therapy.

On Monday, the 10 members of the conference committee for the omnibus bill were named. Cornish and Sen. Warren Limmer, R-Maple Grove, the chairmen of the corresponding committees in the House and Senate, will likely take leadership as the two bills are reconciled. In an interview last week, Cornish said spending projections “might edge up and be able to replenish some of the things we cut.”

Limmer oversaw the Senate bill, which posed no cuts to women’s shelters. He said Friday that he had not yet seen the House version of the bill. In terms of negotiating their bills against that of the governor, Limmer pointed out that Dayton was operating under the presumption of more than $3 billion in tax increases.

“I don’t think the Republican caucuses in either chamber are even going to take one step toward increasing taxes in our state,” Limmer said.

Dayton’s spokeswoman Katharine Tinucci said the governor would not comment on specific programs, but that he stands by his budget proposal.

In 1974, the first battered women’s shelter in the country opened in St. Paul. That shelter, Women’s Advocates, still exists and currently receives $1.3 million of a $2 million budget from the OJP.

Women’s Advocates Executive Director Raeone Loscalzo testified in front of Cornish’s committee in March and said she was one of many in her field who did so.

“They did take a lot of testimony,” Loscalzo said. “I don’t think it influenced them. In fact, I know it didn’t, because it didn’t change what they were proposing.”

By the time Carol Arthur’s turn came to testify in front of the committee, Cornish had warned those in attendance to limit their testimony to two minutes or less.

Arthur decided the best use of her time was an emotional plea. She held a tape recorder up to the microphone, and played a 911 call – “an example of 17,000 911 calls that we receive in the city of Minneapolis every year,” Arthur told the committee – in which a hysterical young boy had called the police.

“My mom’s old boyfriend is trying to hurt my mom, and I’m really scared and I need help,” the boy, 6, screamed at the operator.

After the disturbing tape had played for about a minute, Cornish interrupted.

“Ma’am, do you mind turning that off?” he asked.

After she made a brief appeal for funding, Cornish spoke, saying that there are a lot of “horror stories” to be told about domestic violence, and that “probably none of our families are untouched by this.” But, he went on, telling those stories was not the purpose of this hearing.

A few days after her testimony, Arthur tried to meet Cornish’s request and sent along financial information to committee members. In an interview last week, she said if her agency received a 17.5 percent cut in state funds, amounting to $39,000, she’d need to cut an entire staff position among her eight advocates. With a bit of division and subtraction – eight advocates reaching 3,600 victims per year – Arthur thinks a budget cut could affect hundreds of people each year.

“If I have to get rid of one of them, that’s 450 victims of domestic violence that would not have that advocate reaching out to make contact,” Arthur said.

After she sent financial information to Rep. Glenn Gruenhagen, R-Glencoe, he replied: “Thanks for your email. I will keep your comments in mind when considering the bill on the house floor. Pls send a copy to Rep Cornish.”

Arthur forwarded the information to Cornish and soon got his reply, which was signed, “Chair Cornish.”

“Thanks very much for the information,” he wrote. “I wish the funding picture was better.”