Part of the experience of privilege is to know only your group’s sense of justice, truth and history, and never think to question it. Perhaps it’s appropriate that, on the day before the 151st anniversary of the United States-Dakota War, a well-intended writer seeking justice and truth unintentionally underscores privilege.

First, a caveat: Bluestem Prairie’s editor isn’t much of a fan of extractive industries like mining.

Since 2011, I’ve written extensively about frac sand mining in the driftless region of Southeastern Minnesota and Southwestern Wisconsin, and both here and as a consultant for Clean Up the River Environment (CURE), I covered Strata Corporation’s unfortunate plans to blast and smash Big Stone County’s namesake granite outcrops

The latter issue brought home my love for the Minnesota River Valley where I was born–and the singular granite beauty of its upper reaches. This spring, I relocated to live in the place I love best. History shapes part of this fierce love. Most of my family has lived in the watershed since the 1850s, about as long as most people from Europe, Africa and Asia can claim.

But all around me–in historical markers, in ruins,in the petroglyphs at Jeffers, in the Dakota communities that were established at Morton and Yellow Medicine as Dakota people trickled back to their land after deportation, in last year’s remembrance of the 1862 U.S.-Dakota War, I know that I love a place that was taken from Dakota people.

It’s not guilt. It’s fact, a baseline. And my neighbors’ truths, their history, too frequently is somehow relegated to the fringes or not known at all.

What can reporters learn from Jane Swisshelm 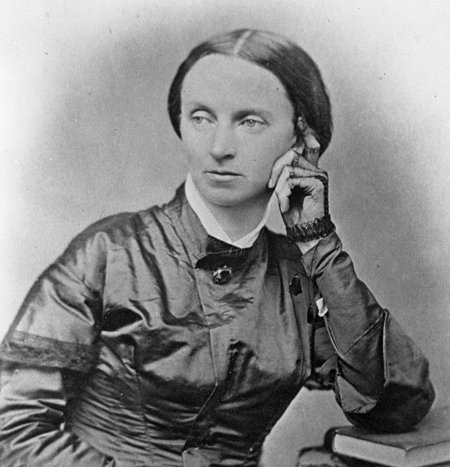 Friday, a column at Conservation Minnesota, directing readers to Mining Truth, illustrates racial privilege, in that the author, former state representative John Tuma (elected as a Republican), and the well-heeled groups, were ignorant of the full history of a woman whose “courage” they ask me and other writers to emulate.

I cannot, especially when that example is held up under this banner: Sense of Justice and Need for the Truth, and tweeted as:

I haven’t covered the sulfide mining issues in Northeastern Minnesota; Aaron Brown has that part of the state covered, and other people more knowledgeable about the Poly-Met and other mine proposals take on those concerns.

But while I don’t know much about the sulfide mining issue–I do know a few things about the 1862 War, including my family’s own memories, supplemented by reading. The knowledge never seemed something that I could dismiss or ignore.

And apparently, it’s the only side that Tuma and the environmental groups’ staff knew:

What was a driving force for Swisshelm was a sense of justice and need for the truth to be brought to light. Our present-day press could learn a lesson from Swisshelm and start asking the tough questions around the pending mining proposals in northern Minnesota . . .

A sense of justice. Need for the truth to be brought to light.

These are lovely things. But there’s another side to Swisshelm that privilege and forgetting allowed them not to know, or even think to question: her radical, genocidal views on the Dakota people, although I’m at a loss how they missed this. It’s not as if either group lacks the resources to hire competent factcheckers or editors. PIM’s Paul Demko reported in early July that the group “plans to spend more than $250,000 this summer on a public awareness campaign centered on proposed sulfide mines in northern Minnesota.”

Perhaps a bit of private awareness of Minnesota history would have helped. Or just effing googling.

Late in 2012, journalist Nick Coleman wrote some of which he learned from Swisshelm in Survival: Proud Descendants of The Exiled:

“Every Sioux found on our soil should get a permanent homestead, 6 feet by 2,” said The St. Cloud Democrat as the prisoners were arriving at Fort Snelling. “Shoot the hyenas…exterminate the wild beasts, and make peace with the devil and all his host sooner than with these red-jawed tigers whose fangs are dripping with the blood of innocents.”

The newspaper was edited by prominent frontier crusading journalist Jane Grey Swisshelm, a champion of abolition and women’s rights. The irony of her demand for native blood may have been unknown to the Dakota, but the sentiment was clear: White Minnesota wanted an end to them.

Jane Grey Swisshelm, one of the editors of an early St. Cloud Times predecessor, The St. Cloud Visiter, spoke out strongly against the Dakota after the war, calling for their extermination (Nexis, All News, accessed August 16, 2013).

Even before the apparently now-neglected awareness brought on by the remembrance of a dark part of the state’s history, Swisshelm’s role in calling for genocide against Dakota people made the news.

In 2010, Coleman wrote in a column in the Star Tribune, Fort Snelling: State’s cradle — and stain;
‘History matters,’ indeed. And true history is sometimes hard:

. . . Last weekend, hundreds of Dakota and their supporters marched to the fort to call for its demolition, saying it symbolizes the destruction of native culture. Few want to raze an important site, but the protest raises a question: How do we interpret a terrible past without trivializing it down to musket drills and hoop skirts?

. . .We’d rather have the kids watch a cannon blow smoke than discuss the sentiments that led Jane Grey Swisshelm, a frontier Minnesota leader, to urge that the Dakota — men, women and children — be driven in front of a cannon’s mouth and blown to bits.

That’s probably not the justice Mining Truth was after.

A SCSU publication reports in Jane Grey Swisshelm Past Imperfect that the St. Cloud Student Senate voted 22-1 in October 2004 to remove a historical plaque honoring Swisshelm from the campus:

. . .student leaders say SCSU should not celebrate a woman who called for control, if not extermination, of Dakota Indians after the Dakota War of 1862 in which hundreds of settlers were killed. In fact, Swisshelm felt so strongly about this issue that she went to Washington to protest in person to President Lincoln for commuting the sentences of more than 300 men scheduled to die for their part in what came to be called the Great Sioux Uprising. Lincoln allowed the hanging of 38 prisoners in Mankato in December 1862 – the largest execution in American history.

Bianca Rhodes, vice president of student government, was quoted in the University Chronicle (Oct. 25, 2004) as saying that the marker should be removed because Swisshelm had conflicting views. “You can’t be a feminist, an abolitionist and a racist in the same breath. It is contradictory to free (some) people of color and kill other people of color.”

The student government resolution called for removal of the plaque “immediately and permanently.”The resolution stated further that: “While the St. Cloud State University Student Association respects the accomplishments of this much heralded feminist and women’s rights activist, we are appalled at the hateful and racist nature of her published views toward the Dakota and other indigenous peoples of the Americas.

In an e-mail, student body president Harold [Hal] Kimball said, “Student Government supports signage, memorials, and plaques on campus that are historically accurate and present alternative perspectives as well as the dominant point of view.”

And the 2004 fracas wasn’t the first re-consideration of Swisshelm on SCSU’s campus. In September 2002, Minnesota Public Radio’s Tim Post reported in A woman of contradiction:

Most women on the Minnesota frontier in the 1850s and 1860s were homemakers and farm wives. But Jane Gray Swisshelm cut against that stereotype. Swisshelm was a St. Cloud newspaper editor with strong opinions. She used her position to fight against slavery and for women’s rights. But while she wrote articles advocating more freedom for some, she also a pushed for the extermination of the state’s Dakota indian population.

There’s a plaque near St. Cloud State University honoring Swisshelm. Some say it should be taken down, but local historians say the plaque should stay. . . .

Swisshelm spouted a stream of editorials against American Indians during the bloody five week U.S. – Dakota war. In an editorial published in 1862, she called for the punishment of all Indians, whether or not they were involved in the attacks.

“Exterminate the wild beasts, and make peace with the devil and all his hosts sooner than these red-jawed tigers, whose fangs are dripping with the blood of the innocents! Get ready, and as soon as these convicted murderers are turned loose, shoot them and be sure they are shot dead, dead, DEAD, DEAD! If they have any souls, the Lord can have mercy on them if he pleases! But that is His business. Ours is to kill the lazy vermin and make sure of killing them.” . . .

Some people in St. Cloud are appalled that Swisshelm is honored in a public place. There’s a plaque that tells the story of Jane Gray Swisshelm near the spot where her office stood.

It mentions her opposition to slavery, her fight for women’s rights, her time as a Civil War nurse. But the plaque doesn’t mention her racist, anti-Indian writings.

That’s a part of Swisshelm’s life some say should be told.

“The more history that people know, the more accurate it is,” says Don Day, director of the American Indian Center at St. Cloud State University. “I’m not saying we need to rewrite history or change history, we just need to have a more complete history of everything that goes on around us.” . . .

And yes, ” a sense of justice and need for the truth to be brought to light.”

The student newspaper called for the plaque to be taken down, just as questionable American Indian team names and mascots were being stripped from collegiate sports teams. Post concludes:

The question [St. Cloud State officials] face is a tough one. Should Jane Gray Swisshelm be remembered as a hero, as a racist? Or for what historians say she was – a woman of contradiction.

What does this have to do about finding truths about mining?

Although that complexity isn’t what Conservation Minnesota and Mining Truth want reporters to learn from Swisshelm, perhaps we should take that away rather than some pap about justice and truth based on a fairy tale Swisshelm.

Perhaps the facile storytelling Tuma (or whomever wrote this tripe) is in itself the problem, the tendency to predigest stories or guilt trip journos into imagining they’re brave in they frame articles exactly as idea is pitching to them, like writing about sulfide mining in these terms:

… basic questions all Minnesotans should be asking.

1) Will Minnesota’s water stay safe and clean?
2) Are there safeguards in place for when things go wrong?
3) Will these foreign companies leave the site clean and maintenance-free when they exit Minnesota?
4) Will Minnesota’s taxpayers be protected?

It’s time for editorial boards to emulate Ms. Swisshelm’s courage and start asking these business interests from outside of our state to answer these questions.

Really? One would think that real courage would involve finding answers to those questions, rather than conducting press release journalism. That will take digging, tenacity, and fidelity to the truth that Conservation Minnesota and Mining Truth thought they had in hand with their seemingly emblematic figure of journalistic courage. Indeed, Swisshelm’s complexity might actually be the lesson reporters should learn–and that the truth about mining may be every bit as hard to reduce to stereotype as Swisshelm herself turns out to be.

What privilege to imagine that one needn’t answer questions, merely pose them. That is the prerogative of the flack. What great investigative reporting to discover answers. That is the duty of reporters.

Images: The concentration camp at Fort Snelling for Dakota families in the winter of 1862-1863 (above). Jane Grey Swisshelm (below).