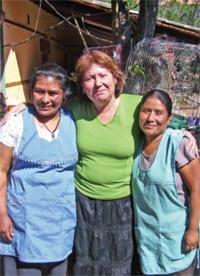 Thayer has traveled to Cuba and Mexico for the social justice group Witness for Peace.

Audrey Thayer’s smile is wry and her brown eyes are warm. She looks comfortable, familiar and friendly. Her turquoise bracelet shines and her shell earrings flash in her short amber hair.

Thayer’s been an activist all her adult life, but when her 22-year-old son died in a tragic fall three years ago, she walked out of her day job and ultimately took on a project with the American Civil Liberties Union that would have many people quaking in their shoes: she now works to educate racists and eradicate racism in northern Minnesota.

The task is enormous, but it’s nothing compared to what she’s already lost, she said. Her son’s death galvanized her and gave her strength she didn’t know she had. “Women who lose babies—they’re the ones to be fearful of,” she explained.

By babies, Thayer doesn’t mean just diaper-wearing, milk-drinking tots—she means children, teenagers, adults; all of them babies to mothers whose grief can’t be measured. In northern Minnesota, they’re lost with heartbreaking regularity: to suicide, to murder, to abuse, to stupid accidents.

“I could easily be at two to three funerals a week,” said Thayer.

In Thayer’s opinion, the root causes of this tragic pattern are institutional: economic deprivation and racism are endemic, and young Native Americans struggle with being what she calls “bicultural citizens of an occupied nation.”

Thayer, who still has two children and four of her nine grandchildren at home, is doing what she can to change things. “I have to,” she said. “I can’t turn my back. I just can’t. After I saw my son in that coffin, at the young age of 22, who never had an opportunity in life, from a poor Native [American] family … if I can just make an impression on one person, when I die and lay in that coffin, I’ve done what I’m supposed to do.”

A restless spirit
Thayer was born in 1951 in Joliet, Ill., to Gladys Emery, an Ojibwe woman from the White Earth Reservation, and Gail Vernon Schultz, a farmer and labor activist whose parents had immigrated to Canada from Germany. She grew up in Wisconsin, surrounded by nearly 30 first cousins and sharing a home on and off throughout her childhood with the aunts and uncles on her mother’s side.

Thayer first got involved in the civil rights movement in 1968, at the all-black high school she attended in Milwaukee. She had the first of her six children at age 18 and two years later enrolled in college at her dying mother’s request. In 1972, she started working with the American Indian Movement. Over the next 15 years Thayer gave birth to four more children, adopted one and earned a bachelor’s degree and a master’s degree. She worked as a health planner and a social worker, living mostly in Wisconsin, on and off the reservations.

Thayer returned to Bemidji in 1989. She took a job as a family therapist with Beltrami County and a year later bought her family their first house. At age 40, Thayer started working with the U.S. Indian Health Service—a job she would hold for more than a decade.

Stability didn’t bring complacency, however. If anything, Thayer became more focused in her activism: she brought to the small northern town a sophisticated ability to organize and the will to get things done. She co-founded a local branch of the Green Party and became co-chair of the party’s state coordinating committee. In 2002, she organized the Bemidji Peace and Justice Coalition to protest the invasion of Iraq and joined the board of the Anishinaabe Peace and Justice Coalition. She helped Winona LaDuke run a national vice-presidential campaign and she ran for local office herself.

Then Thayer’s life was shattered. Her 22-year-old son, Cheyenne Devlin-Staples, died after falling through a rotten roof his first day on a demolition job near Lake Bemidji. Like the rest of the crew, which included his 18-year-old brother, Charlie Thayer, he hadn’t been given any safety gear, even though the vacant wood-processing plant they were working on was three stories high in parts and eight stories high in others.

Wrote Thayer in an email, “According to OSHA standards, anytime an employee is up above six feet of ground a safety net was to be provided [plus] helmets, gloves and harness to hook to the frame of the building in case anyone fell. The only thing the supervisor told the employees [was] to stay away from the edge of the flat roof. They had only a stepladder to get up on the roof that did not reach the top of the roof. They had to pull each other up on the rotten, thin tin roof. No gloves, no safety equipment.”

The day after Cheyenne died (he’d been airlifted to a hospital in Fargo), Thayer and her family returned to Bemidji to find that another crew of young men was already working on the site—none of them with safety gear. Thayer called OSHA: representatives from the agency showed up that day and shut down the site and later filed a lawsuit against the construction company.

The injustice of her son’s death stabbed at Thayer: if he hadn’t been Indian and poor, would the company have paid a few dollars for safety gear that would’ve saved his life?

Soon after, Thayer walked out of her comfortable, well-paid desk job. She wanted to do something more meaningful with her time.

Search for justice
Thayer lives in Bemidji, which sits in Beltrami County, in the heart of Indian country. The town is surrounded on three sides by reservations: Red Lake, Leech Lake and White Earth. In Beltrami, neighboring Cass County and many other rural Minnesota counties, there have long been claims of racial profiling. Data collected in 1999 showed that Native Americans are arrested at a rate that far exceeds their presence in the population: in Cass County, Indians make up 11 percent of the population but nearly 55 percent of the arrests. Twenty-four Minnesota counties had similar records.

In 2004, the year after her son’s death, Thayer took a job at the ACLU’s new Bemidji office to coordinate the Greater Minnesota Racial Justice Project. The goal of the project, according to the website, is to “eliminate racial disparities and injustices in Greater Minnesota” —a tall order for a part of the state that Thayer says some refer to as “Birmingham of the North,” after the Alabama city that was home to some of the most violent civil rights struggles.

Thayer’s job involves three areas: investigating claims of racial profiling by police, teaching both the Indian and white communities about their constitutional rights and educating public schoolchildren about racial profiling.

She says she’s experienced racial profiling firsthand. “[I’m] riding in vehicles that are designated racial profile cars in Bemidji and get pulled over for no traffic violations whatsoever, and then the officers are in shock to see me sitting there,” she said.

Law enforcement officials have denied that such profiling happens: it’s not their fault, they say, that so many Native Americans break the law.

The courts, on the other hand, are trying to improve their system, said Thayer. “The judicial system’s trying desperately to change things around now for us,” she said. “The judges have heard us, they’re seeing it, we have a court monitoring program now, a volunteer court monitoring program within one county, expanding to two others. We’re a presence there, we’re documenting those statistics.”

Thayer’s job also requires her to mingle with the other side: in order to educate white folks about Indians, she has to meet them where they live. In other words, she’s gone to her share of lutefisk dinners. And hockey games. And fundraisers. The world she finds there is shocking, she said.

“The racial overtones up there are very, very terrible,” she said. “They’ll smile at you and look like they’re agreeing with you and then they turn around and right away they’re not associating with anything that is pro-diversity whatsoever. And we’re not just talking racial justice, we’re talking gender issues, we’re talking anything that’s out of the norm of what’s American. It’s a very conservative area up there …. You’ll see a different population of people.”

Thayer’s had her tires punctured and she’s had so many hate calls—many from churches—that she laughs about them. “I’m used to the hate calls,” she said. “The churches will identify themselves and they’ll ask me to leave the area…or they’ll send me to hell.”

On the other hand, she said, some churches have welcomed her and she’s working with them to educate their congregations.

Stronger than before
In the last few years, Thayer has regained much of the momentum she lost when her son died. Though she’s no longer active in the Green Party (as an ACLU worker she’s required to be nonpartisan), she’s found plenty of outlets for her ceaseless energy. She teaches social work part time at Bemidji State University and narrowly lost a bid for a seat on the city council. She was appointed to the city’s parks and recreation commission, started the Bemidji Community Garden Project and has traveled to Cuba and Mexico as a spokesperson for the social justice group Witness for Peace. This year she helped organize a performance of The Vagina Monologues on the White Earth Reservation and the first-ever Northern Minnesota Indigenous Film Festival. In addition, she’s trying to get funding for an Indian center—a place where urban Indians can be, as she puts it, in their comfort zone. Nearly one in five Bemidji residents are Indians, she said, but the town lacks resources to help them.

“So we’re trying to build an Indian center up there so that they have a central base,” she said. “So the elders can go to a senior citizen program and they can have fry bread or they can quilt in a traditional star quilt or a nine-block Native design….”

Thayer’s also carrying on a drawn-out battle with the city for the piece of land where her son died: she wants to make it off-limits to developers and turn it into a community park. For now, the land sits empty, surrounded by a chain-link fence; but Thayer is undeterred. She knows she’s on the right track.

“We have a teaching that they don’t take you till you’ve done what you’re supposed to do in life,” she said. “I’m 55, so something must be right. I must be doing what I’m supposed to be doing.”