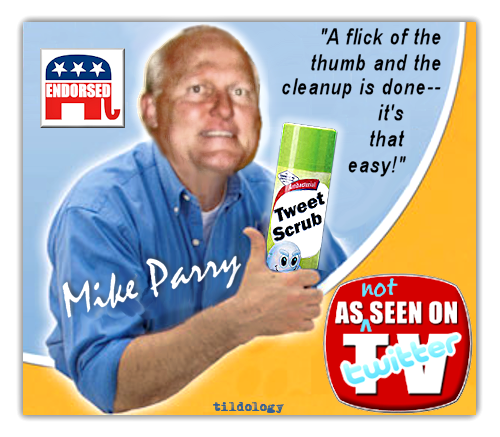 After reading an exclusive on President Obama in Newsweek last year, GOP-endorsed SD26 candidate Mike Parry tweeted that the president is a “Power Hungry Arrogant Black man.” Others have looked at the possibly racist implications of that since-scrubbed utterance.

Few have examined how Mike Parry might define “power hungry.” As Bluestem finds more information about Parry, I wonder if “power hungry” might mirror the GOP candidate’s own political ambitions, whatever hungers may or may not drive the President of the United States.

Just after being drubbed in the 2008 Waseca city council election, Parry declared in December 2008 that he was destined to run for higher office:

But he isn’t done with politics yet and he plans to run for something sometime, but probably not for local office.

“I’ve been given the gift to speak, to be passionate and to tell it like it is,” he said. “At least I’m out there.

“There’s a pretty good chance I’ll run for state office,” he said, although he is not sure what his party affiliation will be. [emphasis added]

This summer, the Waseca County News reported that Parry says he’s running, but he hasn’t picked an office yet:

. . . When reached by phone Thursday morning, Parry said he made the declaration in advance of November 2010 so that he could get a better gauge of public opinion.

“I have decided I’m going to run,” he said, “but there’s many options out there.”

Parry said that his intention at this point is to get a feel for what citizens want from a representative before he decides how he can best serve those citizens.

“There are key races in the local, state and county governments that are going to be up in 2010,” he said. “I believe our citizens are at the point where they’ll go with the candidate that will represent them and not just go out on his own. I will work toward where our citizens want to go.”

. . . Parry said it’s still too early to declare exactly which office he’ll seek. He also wouldn’t rule out another run at Waseca’s Third Ward City Council position that he lost to Mark Christiansen in 2008.

Even as far back the 20th century, Parry thought he was destined to lead his fellow citizens, though they disagreed with him. Parry won his only Waseca City Council race in 2004 when he ran unopposed, but was defeated both times he ran for city office with opposition.

While it’s not mentioned in his campaign bio, Parry ran for Waseca City Council in 1998, shortly after he moved to Waseca, only to be defeated by Fran Zwach by the lopsided margin of 679 to 436, or 58 percent to 37 percent (Download  Open Office document here 98electionresults ).

I’m trying to track down a rumor that Parry unsuccessfully ran for a city office in Iowa where he lived for a time. Whatever the case, Parry comes close to being the perpetual candidate.

As one WCN reader commented after the December 2008 article:

“A leader without followers is just a person going for a walk.”
— Chinese proverb