How important is it for Minnesota to reform our tax system? According to an issue brief we recently released, it’s very important and we need to do it now. 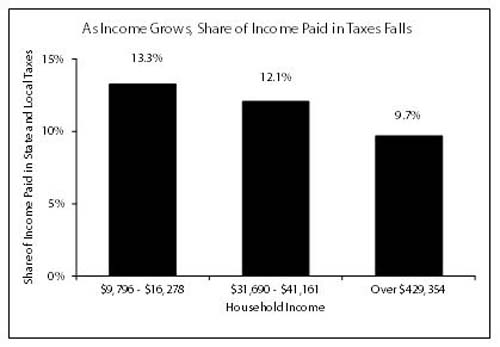 The analysis points out that the wealthiest one percent of Minnesotans (those with household incomes over $429,354) pay 9.7 percent of their income in total state and local taxes. That’s significantly less than the 12.1 percent paid by middle-income households (incomes of $31,960 to $41,161).

Tax fairness in Minnesota has been declining since 1990, and two factors help explain that gap. One is growing income inequality – in other words, the benefits of economic growth have gone disproportionately to those with the highest incomes.

But policy choices matter too. The cuts in income taxes in the 1990s, followed by greater reliance on taxes like the property tax that are less based on the ability to pay, contribute to this trend.

Our conclusion: We need to reform Minnesota’s tax system so we can end the vicious cycle of budget deficits and gimmicks and instead invest in our future and our communities. And we need to reform the system so that all Minnesotans pay their fair share.

The data used to prepare our analysis come from the Minnesota Department of Revenue’s 2011 Tax Incidence Study. But that’s not the only analysis that finds a significant gap between what the highest-income Minnesotans pay in state and local taxes and what low- and middle-income families pay. Last week, the Institute on Taxation and Economic Policy’s latest Who Pays? report found the same trend.