What Minnesota county has the highest proportion of immigrants to native-born residents? That would be Nobles County (county seat: Worthington), with 12.2 percent immigrant population. What city has the highest proportion of immigrants? That would be Brooklyn Park, with 20.3 percent immigrant population. The statistics come from “just-the-facts” researcher, Dr. Greg Owen, who presented a Minneapolis Foundation report on facts about Minnesota immigrants and immigration at a Wilder Research forum on August 30.

“A New Age of Immigrants: Making Immigration Work for Minnesota” is a fact-packed look at immigration in Minnesota, which differs from the national picture in several important ways. The full 70-page report is available on the Minneapolis Foundation website, as is the shorter summary version.

Economics of immigration in Minnesota

“About half of the cows that are milked in Minnesota are milked by someone of Latino descent,” according to a representative of the dairy industry, quoted in the report. That’s just the tip of the employment iceberg, which is explored in the report.

Ready to retire in the next 10 years? Immigrants will be paying into Social Security to fund your retirement, cooking and serving your food, staffing hospitals and nursing homes, and supporting Minnesota’s economy with their labor and with the new businesses that they start.

The Minnesota Department of Employment and Economic Development forecasts growth in high-skill and low-skill jobs. That fits well with the immigrant profile. Some 27 percent of immigrants have less than a high school diploma, compared to nine percent of native-born adults. At the other end of the spectrum, 14 percent of immigrants have a graduate or professional degree, compared to ten percent of native-born adults. Like the jobs, immigrant workers are concentrated at the top and the bottom of the job pyramid.

That looks like a good fit, but Owen warned that important questions remain unanswered:

While these questions are important, researchers agree that the overall economic impact of immigration has been positive, from new business start-ups by immigrants to repopulation of rural communities to payment of taxes. (While the state and local tax picture is not entirely clear, the studies agree that at the federal level, immigrant workers pay more in taxes than they get back in public services.)

William Blazar, senior vice president of the Minnesota Chamber of Commerce, noted the importance of immigrants as consumers, as entrepreneurs, and as workers. He also spoke to the importance of Minnesotans becoming and being seen as global citizens, in an era when even home-grown industries, such as Minnesota’s steel industry, are increasingly dependent on foreign investment. 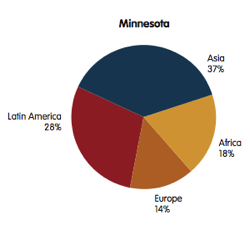 Where do the immigrants come from? 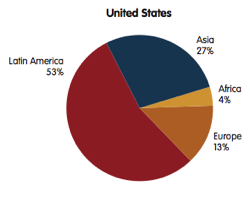 Minnesota has a higher percentage of refugees than other parts of the country, with extensive refugee resettlement programs. In Minnesota, refugees account for 23 percent of immigrants, with the largest numbers coming from Laos, Vietnam and Somalia. 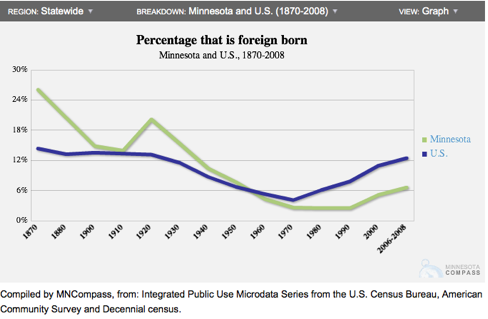 Where do the immigrants go?

“In Long Prairie, 50 percent of the kindergarten class was non-English speaking,” a representative from a rural community and economic development agency told researchers. “The immigrants, in Long Prairie and Melrose, have really made these communities grow. These people are making money and buying houses, paying rent and opening businesses.”

Increasingly, immigrants are found all over the state. The counties with the highest numbers of immigrants are Nobles (12.2 percent) followed by Hennepin (11.9 percent) and Ramsey (11.6 percent). Fifteen Minnesota cities have immigrant populations greater than ten percent.

Willmar is the focus of one section of the report, with an analysis of the changes in racial and immigrant make-up over the past 20 years. “Diversity continues to be a work-in-progress for community members,” the report notes, highlighting challenges in community building and education. 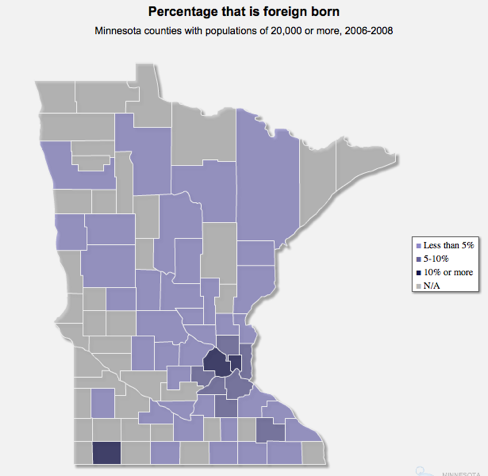 Education as a continuing challenge

Dr. Valeria Silva, superintendent of St. Paul Public Schools, spoke about the challenges faced by a district with 40 percent of its students who are not native English speakers. St. Paul is not alone- three metro districts, five districts in southern Minnesota, and one in western Minnesota have more than 30 percent non-native English speakers, according to Owen. Dr. Owen noted that the ratio of English as a second language teachers to students is 49:1 in Minnesota, compared to 19:1 nationwide.

Silva noted SPPS district successes in constructing social studies curricula around Hmong and Somali cultures, as well as picture dictionaries given to parents. She talked about the lack of resources, but also insisted, “It’s about the will, not staffing or resources.”

Silva talked about the difficulties in keeping undocumented students in school until graduation, when they know that they will not be able to continue to college. These are mainly children who were brought to Minnesota by their parents years ago. “When adults make decisions for children, and children are not able to affect the decision, in other cases we protect the children,” she said, “but not in this one. … What are we saying to children of parents who chose to come here because it was the best thing?”

MayKao Hang, president of the Wilder Foundation, told forum participants that she “grew up as a refugee, immigrant kid in St. Paul” and added that, “my personal story and my life is a testament to how smart investments in our community with immigrant and refugee children can actually gain some great economic returns.”

Sandra Vargas, president of the Minneapolis Foundation, said that her grandparents immigrated to Minnesota in the 1920s, and now her extended family in Minnesota numbers in the hundreds. She noted that immigrants start businesses at a rate three times that of native-born residents, and make those businesses succeed “in areas that we think won’t work,” such as Lake Street in Minneapolis and University Avenue in St. Paul, as well as in Greater Minnesota. “We need to get the facts out,” said Vargas. “We can’t have a serious discussion about immigration without the facts.”