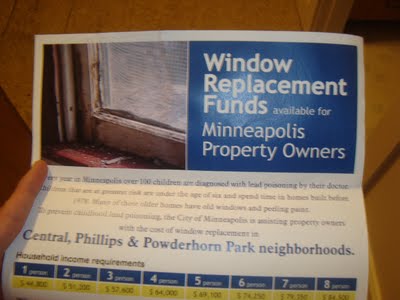 Earlier this month at the Hawthorne Huddle, we had three excellent speakers.  The first presentation was on recycling, the second was a Hennepin County employee discussing their lead abatement programs, and the third was a representative trying to increase more biking and walking in NoMi.  I’ve been vocal in my own ways on all three issues, but for now we’ll focus on windows.

That county employee talked about window replacement and also window refurbishment as ways to abate lead paint from properties.  He handed out a spiffy GIS dot map of all the lead abatement that they’ve done, and it should come as no surprise that much of the work was concentrated in north Minneapolis.  Before we get to some of my pointed questions, it’s time for a disclaimer.

DISCLAIMER:  I am generally against window replacement and in favor of window repair/refurbishment.  However, on the controversial issue of whether children should suffer lead-based brain damage, I come down pretty squarely on the pro-children/anti-lead poisoning brain damage side of things.

So, after hearing this gentleman’s presentation, I asked him…
…if they tracked which properties were abated through window refurbishment and which were abated through complete replacement.  Not surprisingly, the answer was that no, they don’t currently track that kind of information.  I suggested that perhaps they should.  After all, the previous presenter discussed ways in which we could reduce waste through recycling.  And as we all know, the first order of business is to simply PRODUCE LESS WASTE.

I also challenged him to take a good look at some of the properties along Lyndale on his way back to the freeway from Farview Park.  The homes with far more visual appeal, the ones that do a good job of encouraging people to live here, are ones with original features, including windows.  When those windows are removed and ill-fitting cheap plastic replacements are put up instead, then we may be abating lead but we’re also contributing to the slummification of our neighborhoods and losing historic features forever.  And this is happening on the taxpayer’s dime.

(For a good–well, I shouldn’t say GOOD–example of this, see the horrid replacement happening at the attic of 2714 4th St N.  The original window is gone, and poor-fitting plywood is encased around a heap of plastic and vinyl.  It’s unknown whether the current owner of this property is gutting historic features with any public assistance or not.)

Say what you will about the county’s program; at least window refurbishment is openly discussed as an option.  Unlike the flier from the city photographed above, where window replacement is the only item being marketed.  The city’s window replacement program talks ONLY of replacement and does not give even passing reference to the possibility of preservation and refurbishment.  But hey, it’s free!  And it abates lead!  Who can be against that?

Well, one Realtor I know was taking a client around to view houses in Minneapolis.  The client was walking through the house and saw a few replacement windows already in place in the rear of the home.  Much of the rest of the house was adorned with beveled, leaded (oh no!  There’s that word again!) original windows.  The listing agent fired off all sorts of amenities of the home, including the fact that these windows would be replaced.

“Well, if the windows are replaced, I don’t want the house,” was the prospective buyer’s response.

“But the NEW windows are FREE,” said the perplexed listing agent.

“But I don’t want the new windows, I want the ones that area already here.”

“But the city is giving them to us for free.”

The “I don’t want them/but they’re free” exchange went on for a brief time, like a bad Abbott and Costello routine, and it’s still not known whether this agent will ignore an interested buyer for the sake of something that must, in that person’s mind, be good because it’s both new and free.  And to be sure, there are people who want newer windows.  But there are plenty of folks out there who value the historic features of our homes, and who believe these features can be appropriately and safely preserved much more frequently – even when abating lead.

And a footnote:  According to the Field Study of Energy Impacts of Window Rehab Choices conducted by the Vermont Energy Investment Corporation, the University of Vermont School of Civil and Environmental Engineering and the U.S. Army Cold Regions Research and Engineering laboratory (lest you think this study has nothing to do with the cold weather in Minnesota) the estimated first year energy savings between restored wooden windows with a good storm window vs. a replacement window is $0.60.  You read that right, sixty cents per year.  Let’s see, amortized over a thirty-year mortgage, and adjusted for inflation, that comes out to…well, the study says, “The decision to renovate or replace a window should not be based solely on energy considerations, as the difference…between the upgrade options are small.”