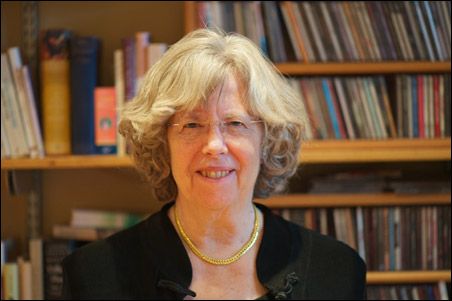 Julie Landsman: "I think really good teachers can really understand all sorts of cultures and weave them into their classrooms." (Photo by Maury Landsman)

Julie Landsman is a white teacher who talks openly and thoughtfully about the elephant in the classroom: race, and its affect on children’s learning.

And though she’s been devoting a good chunk of her time to writing and teaching about how to level that playing field ever since she left her classroom in the Minneapolis schools 10 years ago, she acknowledges she’s a little pessimistic about narrowing the academic achievement gap between white kids and children of color.

“It feels like there has been a concerted effort to demonize public school teachers,” the author of “A White Teacher Talks About Race” and other similar books told me.

Teachers are being blamed, she says, for the divide despite the fact that students of color are often held back by societal racism, poverty, language, culture and what she calls white privilege.

“It is very difficult to make changes. Race and poverty intersect and neighborhoods are different. Some schools have 20 to 40 different languages coming into the building, which I think is great but requires more resources,” the diversity consultant says.

Landsman, will speak about such issues Friday (Jan.27) at an event organized by the Achievement Gap Committee, a group convened five years ago by Don Fraser, former mayor of Minneapolis, to address the academic divide. The gathering starts at noon at House of Hope Presbyterian Church, 797 Summit Ave. in St. Paul. It’s free and open to the public.

Racism and white privilege have always been in the background of the group’s discussions, but Landsman, 67, who taught in Minneapolis schools for 25 years and teaches at area colleges and universities from time to time, will bring the topics into the light of day, says committee co-chairman Grant Abbott.

Intrigued, MinnPost on Wednesday caught up with Landsman by phone to ask her a few questions.

MinnPost: Grant Abbott calls racism and white privilege ‘…the elephant we don’t want to talk about.’ Do you agree?

MP: What led you to write ‘A White Teacher Talks About Race?’

JL: “Basic Needs: A Year With Street Kids in a City School” is about teaching in Minneapolis in a program for kids in trouble. I got the reader right in the middle of it all. Poverty came into it. I describe a breakfast program and a kid eating three or four breakfasts in a row. I worked with teen prostitutes there. They were only 14. It was nitty-gritty, experiential type of book. When it came out, let’s see, in 1993, I started tossing out ideas of what I did.

Often people of color would talk to me after and say, “Why don’t you write a book and talk about race?” They were saying, “When we suggest it people don’t listen or they tell us we’re being too sensitive or exaggerating or whatever. But if white people start saying something about this, maybe some change would happen.”

MP: How relevant is “A White Teacher Talks About Race“ today compared to when it was published?

JL: What I’m finding is that those who have read it [years ago], they’re saying to me, sometimes when they read it again, they feel sad, sadder than they did before.

JL: I think that definitely has to do with No Child Left Behind. It’s driving the curriculum. They have eliminated art in some schools. In some schools they cut science, because it’s not included on the tests. The testing is turning kids off. If you think a fourth grade boy was turned off before, imagine now, when it’s very rote and drilling. And the tests themselves, people have studied then and found them biased toward middle-class and upper-class kids. Examples are from something like taking a ski trip somewhere or going on vacation. There are a lot of ways when kids start reading these tests they feel they don’t have a chance.

MP: So, you‘re talking about bias and institutional racism and white privilege. Can you give us some examples?

JL: I don’t want to name the school because I want people to draw a [broad] lesson. The school offered Advanced Placement and International Baccalaureate classes. You find the comprehensive everyday classes are filled with kids of color, for the most part but AP and IB classes are white.

One year an English teacher who had been teaching at this diverse school for years said,
“I am tired of all my AP classes in a school where 70 percent are of color being all white.” He went to a counselor whom he really trusted and said, “I want you to start directing kids of color to my classes.” Before that his AP classes were 80- percent white. After that when counselor and teacher worked together, 75 percent were students of color. They were admitted just based on whether they could read.

MP: What was the upshot?

JL: Students of color that took the AP classes varied in their success. [But some] students who never imagined themselves being able to take and pass an AP class, and whom some of the other teachers in the building never imagined would make it, did. They passed the AP test and went on. It broke open an “understanding” or accepted fact, that basically black kids could not hack it in advanced classes. A number of them… passed the class who did not pass the test, too.

MP: Would you define ‘white privilege?’

JL: It’s a whole collection of things that white people have. Peggy McIntosh has written the classic article “White Privilege: Unpacking the Invisible Knapsack.” She lists 46. I took the privileges she lists and started writing from there. It is making people think. Instead of disadvantages to people of color, it’s flipping the mind to advantages that white people have.

JL: If you go into a bank for a loan and you’re white, you can be guaranteed you will not be denied a loan based on skin color. You can go into a store and be assured you won’t be followed around based on the color of your skin.

MP: Are we talking only about blacks?

JL: We are talking about people with black and brown skin mostly, although Asians have their own set of stereotypes about them. Teachers assume they are quiet and well-behaved and good in math. Now it is becoming more and more Latinos designated as problem kids.

Let me give you one example, the most powerful for me. As I white person I don’t get generalized about. Black friends are worried all the time that if a black person does something it’s going to reflect on them. We look at them as a whole group and generalize. A black kid was carrying books from a car into school after the acquittal of O.J. Simpson and media with cameras approached him to ask what did it mean for him as an African-American to see O.J. acquitted? He would not answer and walked back into the building. I asked him how he felt. He said, “If when Teddy Kennedy’s nephew was acquitted of rape, would they have gone to a white school and said, ‘What does it mean to you as a white man that he was acquitted?'”

MP: You talk of having schools weave diverse cultures into their curriculums, say with art and literature. What literature might you suggest?

JL: To me it’s almost archaic what schools are using. It may be budget. The book I would love to see in history classes is a book by Isabel Wilkerson, “The Warmth of Other Suns,” about the migration of African-Americans from south to north. In literature there’s Toni Morrison, whose work is as difficult and challenging as any white literature. There are August Wilson plays.

MP: Can white teachers possibly understand their pupils of color enough to appreciate their differences, be fair to them, motivate and teach them?

JL: Sometimes that is a question teachers ask me. All I can do is point to the really successful white teachers that have done amazing things with children of color. I think really good teachers can really understand all sorts of cultures and weave them into their classrooms. It’s unfortunate we don’t have more teachers of color.

MP: In conclusion, has there been progress?

JL: I think there has been. I’m still somewhat pessimistic when I read what is going on in the broader area of education, a lot of support from very conservative groups. What I’m worried about is we are going to lose public education, really well-funded and well-supported public schools.