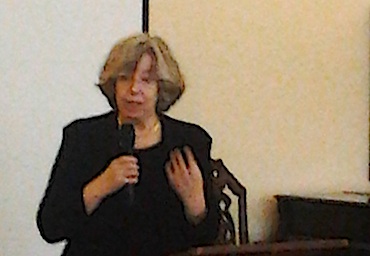 “People don’t want to talk about racism,” said Julie Landsman, author of A White Teacher Talks about Race, at a brown bag lunch sponsored by the Committee on the Achievement Gap. “They say it’s all about class.” Landsman spoke about the achievement gap, both here in Minnesota and nationally, and how racism and white privilege, persist as causes for the embarrassing Minnesota achievement gap statistics on January 27 at House of Hope Presbyterian Church in St. Paul.

“Why is this so hard for people?” Landsman said. She described an example of middle school black children being followed around the mall, even if they have done nothing wrong.

Landsman does trainings in states across the country, and one thing she sees is teachers crossing their arms and reading their grade books during the sessions. There’s a fear, she said, and people are more comfortable talking about poverty, or gender, but they avoid talking about race.

Landsman cited the work of Gloria Ladson-Billings, who talks about cultural competency, or, listening to, and valuing the cultural experiences that children of color bring with them to school. Landsman used a phrase Ladson-Billings has used in her work — “the state of being.”

“Being a white person in the U.S. is a state of being,” said Landsman. “We are not conscious of it.” Even if a school has one speaker come in to talk about cultural sensitivity, or does one workshop, that’s not enough if the schools don’t follow up with that training. There’s a “white racial frame,” Landsman said, and so often white privileges are invisible, throughout society but especially in the education system.

Landsman played a clip of Billings speaking, in which Billings said teachers have to listen to students, because you never know if Martin Luther King, or Toni Morrison, or Cesar Chavez, is one of your students. “You have to teach them as if they were in that classroom.”

McIntosh has made a list of the daily effects of white privilege, from being able to buy a house or get an apartment without being discriminated against because of race, to not having to constantly represent one’s race.

For examples of this white privilege, Landsman pointed to the judge who gets stopped by guards at a mall because they think he’s shoplifting, or Landsman’s own students, when she was teaching at North High School, who were asked by reporters what they thought of the O.J. Simpson verdict. “Were white students asked what they thought when the Kennedy nephew was acquitted of rape?” she said.

As another example, Landsman talked about an African American friend of hers who has taught at Carleton for 40 years, and is asked for an I.D. every time she goes to the grocery store. Landsman, who hadn’t lived in Northfield in 10 years, doesn’t get asked for I.D.

“This isn’t a matter of class,” she said. These micro-aggressions are part of the small day-to-day things that happen to people of color.

White privilege plays itself out in schools in many ways, but one example Landsman brought up was the tracking system, in which International Baccalaureate (IB) and Advanced Placement (AP) classes are taken by a majority of white students. In addition, she noted, the curriculum needs to be updated to include more writers of color and not just have “Harriet Tubman month” year after year. “It’s a disservice to white students to keep the curriculum white,” she said.

Minnesota, Landsman said, has particular challenges. “We are a very segregated state,” she said. In trainings that Landsman gives in Minnesota, she noticed that people here get very angry in response to what she is saying, in comparison to those in other states. “There’s an openness we don’t have. We don’t want to wrestle with it.”

Also, she said, colleges and universities that train teachers sometimes don’t teach diversity at all. She challenged lawmakers to include diversity in the state’s licensure requirements.

Landsman didn’t go so far as to say “Minnesota Nice” caused the state’s high achievement gap, but did say: “There’s a visceral way that resistance to these conversations is hitting Minnesota.”