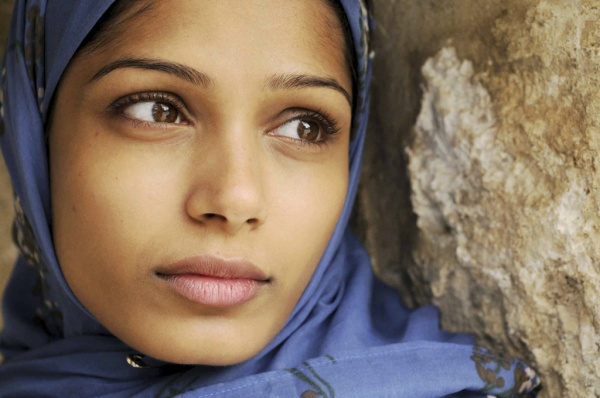 Artist/painter/filmmaker Julian Schnabel was recently in the Twin Cities to take part in the Regis Dialogue and Retrospective at the Walker Art Center—he was the 53rd filmmaker to be featured in the prestigious series—but he was also in town to talk about his controversial new film, Miral.

Schnabel’s paintings, sculptures and works on paper have been exhibited all over the world (a few of his own paintings are currently in the Walker gallery and I recommend you see them before they leave), but Schnabel didn’t get into filmmaking until 1996. He wrote and directed Basquiat, based on the life of New York artist Jean Michel Basquiat, and the film received outstanding reviews. After Basquiat, Schnabel wrote and directed Javier Bardem to his first Oscar nomination in Before Night Falls, based on the life of exiled Cuban novelist Reinaldo Arenas.

For Schnabel’s third film, the astounding The Diving Bell and the Butterfly, Schnabel won Best Director at the Cannes Film Festival and later nabbed himself an Oscar nomination for Best Director. The film is based on the true story of Elle editor Jean-Dominique Bauby, who suffered a stroke and became paralyzed and was only able to communicate by blinking his left eye. The film features beautifully captured images reminiscent of Schnabel’s own art; it raised his profile as a one-of-a-kind auteur, a creative and visionary artist.

Schnabel’s new film Miral, opening this Friday at the Lagoon Cinema, is again based on a true story: Palestinian novelist/screenwriter Rula Jebreal’s semi-autobiographical tale of growing up in the middle of the conflict between Israel and Palestine. Much of Miral is told from the perspective of four different Palestinian women including Miral (Slumdog Millionaire‘s Frieda Pinto); the film starts in 1948 and spans close to five decades, starting with the Deir Yassin Massacre, which took place near Jerusalem and saw the death of over 100 Palestinian people. When Hind Husseini (played by Hiam Abbass) rescues 55 orphaned children after the massacre, she brings them back to her home and decides to open a school to house the children, and so the first of the four stories begins. But it isn’t until close to the halfway point of the film when Miral first appears, when her father brings her to Hind’s school. When Miral gets caught up in the resistance movement to protest Israel’s rule over the West Bank and Gaza in 1987, she is torn by wanting to join the resistance and to be with its leader Hani (Omar Metwally) and the desire to continue her schooling and get out of Palestine, away from the war.

I spoke with Schnabel on a sunny Saturday afternoon; the interview took place in two different locations and at times was very challenging, in a good way. I’d seen the film earlier that week, and Schnabel encouraged me to see the film again on the big screen the night before our interview. “If I want to see a painting, I don’t want to see a picture of it, I want to be standing right in front of it,” he said to me before Friday night’s screening. While I agree with him that I’d rather see every film on the big screen opposed to watching a DVD in my living room, it was difficult to be put on the spot; still, it did help with my questioning the next day. I was hoping that my questions weren’t too out of line or clichéd.

When I walked out of the auditorium Schnabel spotted me and we met in the Walker lobby, sitting on the comfy green couches. Schnabel sunk right in and was ready for my questions a few hours before the Regis Dialogue was to begin. Little did I know, I had a small amount of time to speak with him since his schedule was jam-packed until the dialogue started: the interview would continue from the Walker lobby to his car on the way back to his hotel for a scheduled dinner. Also, I discovered that I would be answering questions about myself (a first for me).

In the interview, Schnabel mentions a blog entry from the Jewish Journal about a screening of Miral that took place at the UN in New York City on March 14; I had not read the piece prior to the interview, but when I read it later I thought it was a very interesting and reasonable piece about some of the controversy surrounding the screening and the many supporters who showed up and packed the United Nations General Assembly. Over 1,600 people were in attendance, including Sean Penn, Robert DeNiro, and Miral co-star Vanessa Redgrave.

Click the play button below to listen to the interview.