Jon Jon Scott has an opinion on just about everything. 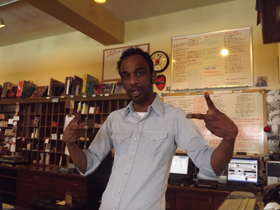 “But I don’t offer it unless someone asks,” said Scott, the 47-year-old former bassist who mans the counter at the iconic Electric Fetus record store at the corner of Franklin Avenue East and 4th Avenue South in Minneapolis. However, if someone is brave enough to ask Scott’s opinion, be prepared. Scott’s opinions – nor his colorful language – are not for the faint of heart. Pick a topic – especially a musical topic – and Scott has an opinion.

But before dismissing Scott as some quirky record store guy with a brash mouth, it might prove helpful to know a little more about the guy. When I got the assignment to interview Scott, a long time friend of Insight News/Aesthetically Speaking publisher Batala McFarlane, she gave me a heads up that Scott knows something about everything music-related and to be ready for the interview because Scott is quite the multi-tasker. She was right. I had my hands full with this assignment. For those who can keep up, Scott is a wealth of knowledge.

Scott is not just “some guy at the record store.” The Philadelphia-born and Chicago-raised Scott has traveled quite the interesting road.

“I moved to Minneapolis in 1989,” said Scott, as he interrupted a friendly argument he was having about the artist, Flying Lotus. “He’s a joke. As a producer, he’s great, but as an artist, he’s a joke.”

As fate would have it, the next customer to walk in requested two tickets to see an upcoming Flying Lotus concert.

“But yeah, I moved here in 1989 when I was playing in this band, Hot Sauce, and these girls who owned a salon invited us up here to play. I was like wow, what a cool city. I was like Minneapolis is like Wonder Bread,” said Scott as he laughed and articulated a few more words.

Scott continued with his tale of life, speaking at breakneck speed. After it became apparent that his pace of speak might be a bit too rapid for my pen, Scott turned to a computer behind the counter and said, “I’ve got a bio online for a blog that I did on my mom’s website. I met my birthmother just last year for the first time, but that’s a whole other story.”

Scott briefly explained that his birthmother is named Aileen Muhammad and has authored a book, “Cowards and Angels,” and said she has a website. Scott quickly typed in the webpage into the open browser and the page, www.7sovereignwings.org opened.

“I have a bio on here, I’ll email it to you,” said Scott, assuring me it was there. 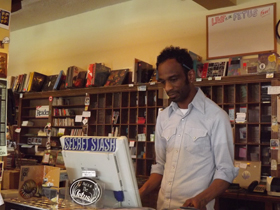 True to his word, the bio was sitting in my inbox. In part it read,

Jon Jon Scott, is an artist who works in a variety of media, [is] also a pop culture enthusiast, avid music fan, vinyl collector, and political supporter of the oppressed.

More recently, he has been a writer, record slanger, music producer, manager, promoter and film soundtrack supervisor. As a writer, he has contributed to Trace Magazine, Request Magazine, The Liberator, Insight [News], Pulse, Culture Bully, Revile [and the] Village Voice Pop & Jazz Poll.

As if that weren’t fascinating enough, the bio continues with an unexpected tidbit.

Talk about burring the lead.

Scott, who worked at the Electric Fetus in the late 1990s until 2001 when he moved to New York, said from 2003 – 2008 he was in Toronto working out of the offices of Sony Canada running his label, Black Corners. But it was an artist in particular that took him away from the Fetus.

“Yeah, back in 2001 Doc McKinney and I got a deal with Res,” said Scott, referring to the neosoul singer who scored a Billboard number one dance hit with the single, “They Say Vision.” It was that signing that led to Scott’s dealings with Sony Music.

Scott is back in Minneapolis, back behind the counter of Electric Fetus – still talking all things music. He’s heavily promoting an artist signed to his Black Corner label, Greg Grease.

“Google his name and you’ll see a million things on him,” said Scott, explaining that Grease has won several area awards and will be performing at Soundset later in the month. In a phone conversation the day prior, Scott told me, “(Grease) is blowing up – I just did an interview with MTV about him and I can’t get the Black media here to do anything on him. That’s a damn shame.”

With that not so subtle push from Scott, I checked out a few songs from Grease and I’ll be honest, I’m feeling dude’s music. I’m pretty sure we’ll be doing a story on Grease soon.

Though a former major label record executive, there’s something strangely normal about Scott being at the Fetus. He’s in his element. He knows every song that’s playing on the in-store system. Each customer that comes in strikes up a musical conversation with Scott and, not surprisingly, Scott has an opinion.

Someone comes to the counter looking to purchase Robert Cray tickets.

“Are you going,” the gentleman’s question directed at Scott.

“Nope,” retorts Scott. “I mean I listened to his first two albums and that was enough for me.”

It seems Scott wasn’t too impressed with Cray.

Another customer thumbs through some discount used CDs near the counter and remarks to Scott that the all female London-based indie-rock band, Savages, is coming to town. He too quizzes Scott. Of course, Scott has an opinion.

“I see everybody [excited] over the group’s music, but it didn’t excite me,” said Scott.

The two share a laugh and Scott abruptly switches topics to Lauren Hill, who was recently sentenced to three months prison time for tax evasion.

“Damn, they got my girl,” said Scott. Almost on cue, Hill’s record comes on overhead and Scott bobs to the music while ringing up a customer. “I blame the Marleys for (expletive) up her (expletive).”

With the customer squared away, Scott turned to me and asked, “So, what else do you wanna know?”

Before I could answer, Scott announces he’s going to run downstairs and he’ll be right back. With the speed of Flash, he is gone and back, returning with CDs of Greg Grease, Villa Rosa, which is a joint project of Muja Messiah and Maria Isa, and a flyer for an upcoming Cabooze May 17 show featuring hip-hop veterans, Kool G Rap and DJ Polo. Without having to say a word, it’s apparent these are all Scott’s works.

“If you were really interviewing me I’d be able to tell you all the (excrement),” said Scott.

He had preferred the interview take place elsewhere, but I wanted to see him in action at the Fetus. I just felt something more organic and magical could happen seeing Scott inside of a record store. 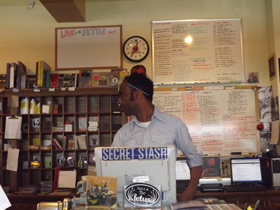 Village Voice columnist Lisa Jones must have felt that way as well. Because of a chance meeting in a record store, Jones devoted an entire chapter of her book, “Bulletproof Diva: Tales of Race, Sex and Hair,” to Scott. The chapter is titled “Brother Jon.”

The “interview” with Scott continued a bit longer with a game of word association regarding some well-known artists. Scott’s replies were as Scott the man is – no holds barred.

Asked about Lil Wayne, Scott replied, “He’s a cultural embarrassment.” Asked about Common and Scott said, “An actor rapper. I used to love him but I don’t want to hear him rap again. When rappers get into acting they’re never the same. Mos Def is the exception.” Asked of Kendrick Lamar and it’s apparent Scott is digging him.

“He’s the current and the future,” said Scott. “He’s as if Nas lived in Compton. He’s my favorite mainstream rapper.”

It’s 1 p.m. and “Brother Jon,” who has been moving about as if he drank an entire pot of coffee, has a brief conversation with a store manager. He turned to me and asked, “You got everything you need?”

Recognizing the cue to end the interview, I assured Scott that I had everything.

“OK, good, I’m going to lunch,” said Scott as he dashed down from the counter and bolted out the door.

My pen is still trying to catch up.