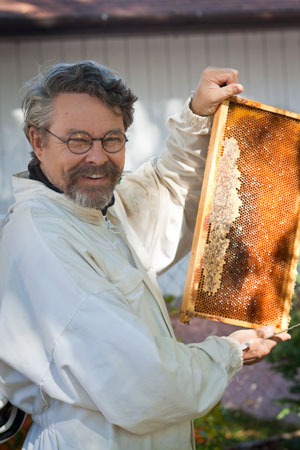 John Teisberg, a man with "too many hobbies." (Park Bugle photo by Lori Hamilton)

To meet John Teisberg of Como Park is to know a man of many enthusiasms.

He’s a wood turner who fashions funeral boxes for cremation ashes. As a member of a men’s mentoring group, the Mankind Project, he helps host the group’s semi-annual warrior adventure retreat to the woods. He does volunteer buckthorn clearing with a local youth club. He plays “beep” baseball with some blind buddies. He collects model trucks, one of which happens to be the full-size, 60-year-old classic pumper truck gathering dust rather majestically out by his garage in the alley behind Simpson Avenue.

In that garage, you could find evidence of another pet project: a honey-spinner, which he borrowed from a “fella” he got to know at the Minnesota Hobby Beekeepers Association, which meets nearby on the University of Minnesota’s St. Paul campus. From time to time, Teisberg, who somehow also finds time for his day job as a technical illustrator and animator, helps this beekeeping friend work the demonstration colonies at Harriet Alexander Nature Center in Roseville.

In fact, Teisberg once rescued a swarm from a tree across the street from his house and drove it—slowly, carefully, in the dark of night—over to Harriet Alexander, he in his full bee suit, half-hoping he’d be stopped by the law.

“So I drove up to Roseville with 30,000 bees!” he recalls gleefully. The whole adventure was quite the tale, since the neighborhood watched as he first started shaking what he describes as a “basketball pile of bees” into a big cardboard box and warned, “Stand back. I’m going to capture this.”

“All the bees went bloomp, right in the box,” he says.

Well, most of them did.

“A lot of them spilled out on the ground. Apparently, I didn’t get the queen on the first shake, so they started clumping back up there.”

With all the neighbors watching, if from a safe distance, he gave the branch a violent shake and the remainder fell into the cardboard box. He carried the buzzing burden to his backyard, with an audience in tow, and prepared an extra hive, or “super,” meanwhile resting the box full of bees on the rounded fender of his fire truck.

“I started taking some frames out so I could pour the bees in,” he recalls. “Everybody was standing in the yard, and the cardboard box fell onto the ground!”

Teisberg didn’t panic. The box had tipped on its side, but fortunately, the queen remained in the bottom of the cardboard box and the bees soon followed her into their new home.

Teisberg’s enthusiasm is infectious as he describes what a swarm is, how mellow a swarm can be, how the hive splits in two like cell division, with one group following their new queen and exploring to find a new home, then moving in.

“There’s a thing called the March of the Bees,” he says. “When you’re capturing a swarm, you capture the queen, and if you dump them in the hive, they all march like a wave of water into the hive. It’s like water flowing backwards.”

Despite his obvious familiarity with bee-wrangling, Teisberg began beekeeping just a few years back, after taking a class from a master beekeeper at Century College, Bob Sitko. Several years in, he learned that, oops, he was supposed to have purchased a permit for his “fun little strange critters.”

“I got busted,” he chuckles.

When the man with the clipboard came out to inspect his two hive stacks made of high-density Styrofoam, which sit up on the roof of Teisberg’s office bump-out behind the kitchen, it wasn’t quite regulation. Normally, the City of St. Paul requires a high, solid, lockable fence to force bees to fly high up over people’s heads, and a sign warning “BEES” in large letters. Not a problem, if your hives sit so far above the fray that you need a ladder to work them.

In the beginning, most of his neighbors had no idea he kept bees until he had to walk around to seek their official permission. (In order to be licensed, Teisberg needed approval from 75 percent of those living nearby.) Now they know who to call in case of a swarm.

St. Paul Animal Control approved his two hives (the rule is one hive per thousand square feet of yard), and he paid his permit fee: $75 the first year; $28 each year after that.

Teisberg believes he’s in a great spot for beekeeping—less than a mile from the St. Paul campus, between Como Park and the State Fairgrounds.

“That’s a lot of open land still,” he says. “I’m surprised when I go up in that old space needle at the fairgrounds and look around. It’s all trees,” he says, “like a forest. There’s lots of green stuff in spite of all the roads and houses.”

His thousands of bees forage for nectar within a radius of a few miles. The bees seem to thrive on the exuberant variety of urban flowers in his neighborhood. They visit his across-the-street neighbor’s birdbath for water. (She doesn’t mind.) As Teisberg explains, it may be the process of trucking hives out to pollinate one single crop after another in huge, monoculture fields sprayed with insecticides that weakens and kills the bee colonies of professional beekeepers.

While no one knows quite what causes Colony Collapse Disorder, the bane of large-scale pollination businesses, it appears city beekeeping is good for gardens and for urban beekeepers, as well.

During the 2012 State Fair, Teisberg spent time on standby to spin honey at the demonstration hives inside the Agriculture Building. “This is definitely a hobby,” he said. “I have too many hobbies. I turn wood. In fact, I turn pens out of buckthorn.”

Indeed, when this reporter visited his home, she noticed some trimmed buckthorn branches stacked against the back fence and asked if he’d like some more. His face lit up. “If I could get any that were bigger than that, I’d come over with a saw.”