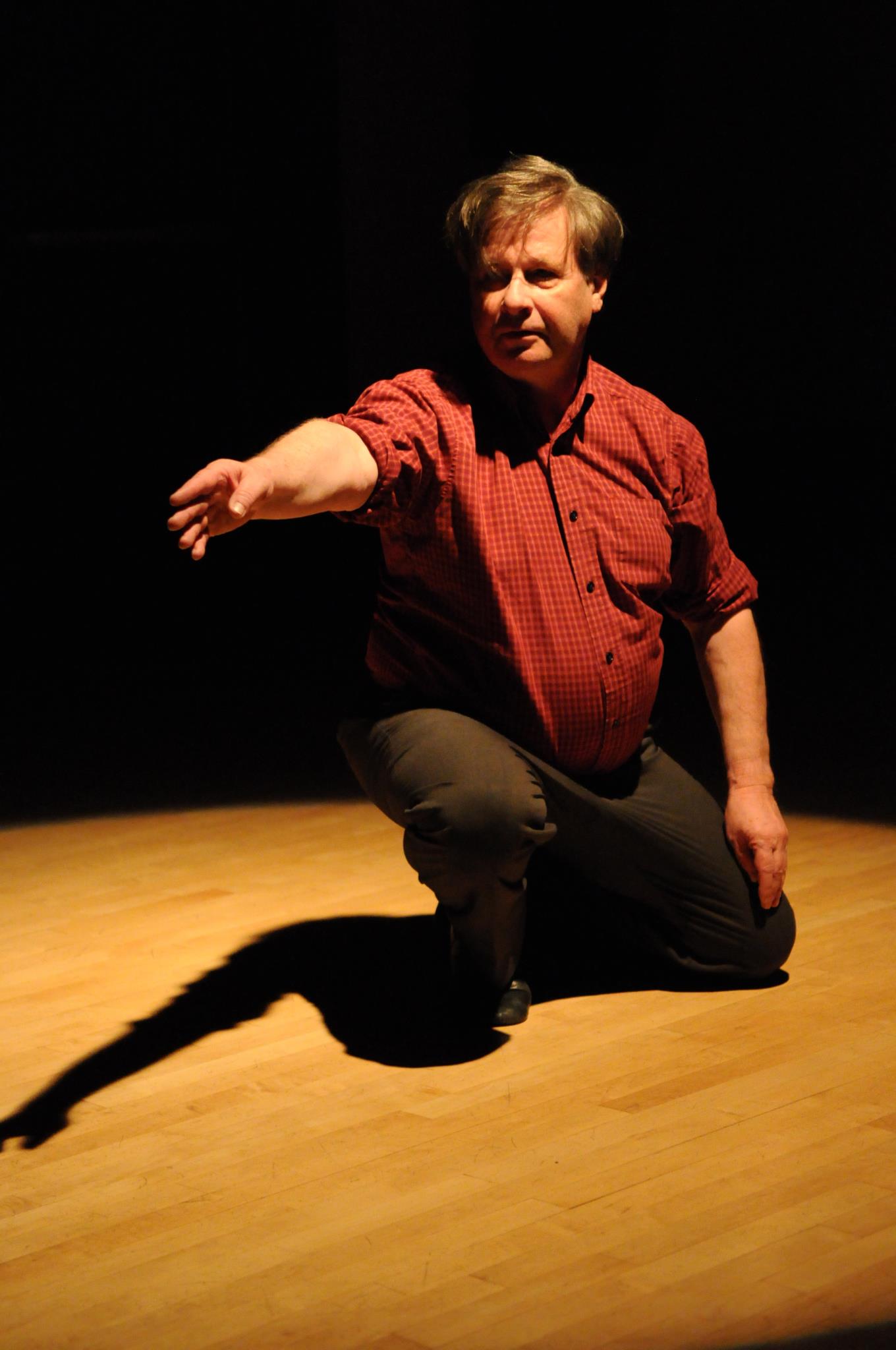 John Munger—dancer, choreographer, teacher, writer, philosopher, raconteur, researcher and historian—invested everything he did with passionate intensity. He illuminated the field of dance with his droll and sophisticated dances, his wizardly statistical analysis of dance trends, and his passion for making dance accessible and available to everyone. His untimely death on April 30, 2013, at age 67 has left his family and his many colleagues, friends, students, and supporters heavy of heart and full of praise for this man of many parts.

Among the numerous outpourings of respect and affection on John’s Facebook page, Miriam Gerberg sums up the feelings of many:  “I learned so very much from him about making art and about being a mensch.” Former student Zeb Henderson Shreve wrote,  “The Minneapolis dance community lost a friend, gadfly, cheerleader and above all a teacher today.”

John’s body of work ranged from lyrical group dances to idiosyncratic solos. In a 2000 interview for the online arts magazine “3-Minute Egg” he said, “I’m trying to make dances for myself that can be done by somebody of my age and appearance….trying to make dances that give dignity and virtuosity and power and presence to an older dancer.”

His meticulously crafted dances could be as witty and wild as a vaudeville turn, or evoke the trenchant melancholy of Samuel Beckett—sometimes simultaneously. In a 2009 review of the wry one-man show that was John’s answer to The Nutcracker, Jay Gabler wrote in the Twin Cities Daily Planet, “…when he moves, though, he’s electric. The Nutbuster!! Choreography incorporates elements from any number of styles, and Munger handles them all with aplomb.”

John’s unquenchable zest for life and for spreading the gospel of dance co-habited with a razor sharp intellect that made him a superb wordsmith, as well as a meticulous researcher. As director of research and information at Dance/USA, a national service organization for professional dance, he collected and analyzed data. John became the go-to guy for statistical information on dance in America, contributing to articles for national publications such as The New York Times and Dance Magazine, for which he produced a special publication, “Dancing with Dollars in the Millennium.”

Bonnie Brooks, former president and executive director of Dance/USA wrote, “While I always believed that his greatest love was being in the studio or on the stage, John’s contributions as a researcher and expert in and on the national dance scene should never be forgotten.  He created, and then raised, the bar. He changed the landscape forever, for the better.”

In the Twin Cities, John lent his administrative and financial expertise to the Nancy Hauser Dance Company and, later, the Minnesota Dance Alliance. He wrote many dance and performance reviews for online media such as the Twin Cities Daily Planet. In an article about the annual Minnesota Fringe Festival, for which he wrote numerous reviews, he writes with characteristic forthrightness and irreverence about his belief that art and life must intersect and reflect one another:

“One of the things I love so dearly about The Fringe is that it reflects real life on so many levels. The good, the bad, the ugly, and the fabulous. That’s how art should be. It should be real….We have to take all levels. We have to grow up and take ALL levels, just as a parent who raises children takes all levels as they come along. All levels. That’s our world, like it or not. Celebrate the fabulous, comment on the imperfect, encourage the youthful, despise the rip-offs, help the newcomers, just plain effing be a community.”

John tirelessly nurtured that sense of community by mentoring dancers at all levels. He taught a legendary modern dance class open to anyone and everyone at the Zenon Dance Studio, and formerly taught movement for actors at the Science Museum of Minnesota and classes at the Nancy Hauser Dance Studio. For the last several years his company Third Rabbit Dance Ensemble, formed in 1991, has produced bi-monthly programs of work by numerous emerging and established choreographers at the Bryant Lake Bowl. During these informal events, John encouraged everyone from dance aficionados to newcomers to simply relax and engage with what they were seeing.

John began his formal dance career in the late 1960’s. His mentor, with whom he studied and performed for seven years, was pioneering modern dance legend Hanya Holm, a student of Mary Wigman who is best known for choreographing the original productions of My Fair Lady, Camelot, and other Broadway musicals. He also studied modern, ballet and jazz with Norman Cornick. John performed for several years as a soloist with Cornick’s Colorado Dance Theatre. While in Colorado he also founded the dance program at Fountain Valley School and served as Artistic Director of the Joy of Movement Dance Company.

He moved to Minnesota in 1978, where he became School Director and then General Manager of Nancy Hauser’s Guild of Performing Arts. Beginning in 1984 he free-lanced as a teacher, performer and choreographer in the Twin Cities, creating over eighty works. His choreography has been recognized with McKnight and Minnesota State Arts Board Fellowships, with a SAGE Award, and with numerous commissions.

John has performed in the works of many local choreographers including Georgia Stephens, April Sellers, Diane Aldis, Sarah Hauss, Michael Engel and Wendy Ansley, as well as with companies including the American-Russian Dance Company and Kinetic Revolutions.  He became a staple of the Continental Ballet, where he performed for 22 years in numerous character roles including Dr. Coppelius in Coppelia, Mother Ginger and Drosselmeyer in The Nutcracker, and the step mother in Cinderella. The Continental Ballet’s artistic director Riet Velthuisen wrote, “He was always there for each rehearsal and we could count on him to entertain all the dancers before the performances. His passing is a big loss not only for the Company but for me personally. It will be so hard to do a production without him.”

We will never again hear John’s sonorous voice or have the benefit of his wryly astute commentary on the state of the arts, and the world. We will never again see him tread the boards with the passion and panache that was uniquely his. But he will always be with us in puckish spirit.  As Bonnie Brooks so aptly put it, “I think that those of us who had the blessing of his presence and influence in our lives will fare forward channeling John.  That would cause him a pained chuckle, but secretly, he’d love it.”

A memorial service will be held on Tuesday, May 21, at 7:30 PM at Patrick’s Cabaret in Minneapolis.

In honor of John Munger‘s commitment to research on the dance field and in recognition of his two decades with Dance/USA, the organization has established the John R. Munger Research Fellowship Program. The John Munger Research Fellowship will provide annual support to one graduate-level student to learn and participate in national research efforts for the performing arts, specifically professional dance, at the Dance/USA office in Washington, DC for 6-9 months.  The inaugural Fellowship will be in 2014.

To donate to the Fellowship program, contributions may be made through the Dance/USA website here or by mailing a check to Dance/USA with “John R. Munger Research Fellowship” listed in the memo.