Angeljalec Givens confesses that she used to dislike school, and if teachers and administrators at the Job Corps Center hadn’t intervened, that attitude might have cost her dearly.

Givens, now 21, dropped out of Como Park Senior High School and worked several jobs that she could see were going nowhere. Her mother suggested she give the Job Corps, the federal education and career training program for disadvantaged young people, a try.

She was accepted at the Hubert H. Humphrey Job Corps Center, 1480 N. Snelling Ave., last October and entered the program with a new sense of purpose.

“I decided to come here, get my GED (high school equivalency degree) and get my life started,” she said.

As things turned out, it wasn’t quite that simple. Givens, who is among the 15 percent of St. Paul Job Corps students who do not live on campus, reverted to her old ways and began missing classes. She is grateful to school officials who sat her down and warned her that she was in danger of being dropped from the program.

“It was a real wake-up call,” Givens said. “I had to ask myself, ‘If I leave here, where do I go? Do I want to work minimum-wage jobs for the rest of my life?’ ”

She’s made the most of a second chance, winning several “student-of- the-month” honors and earning her GED.

“I feel proud of myself for the changes I’ve made,” she said. Givens is in the office administration program, part of the center’s Finance and Business career path, and hopes ultimately to pursue a paralegal degree at one of the community colleges with which the Hubert H. Humphrey Job Corps partners. 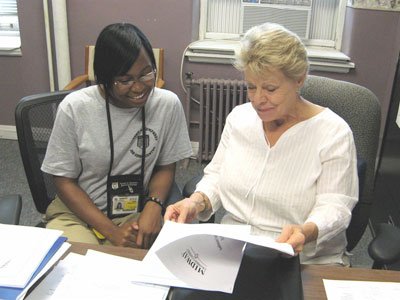 Cate Smith Edlund is the center’s community liaison, and she says that Givens is now a highly motivated individual and one of the Job Corps’ many success stories.

“Like Angeljalec, many of our students have been employed before they come here, but they were in jobs with no future and needed to fulfill some further educational requirements before they could start a real career,” Smith Edlund said.

In addition to the Finance and Business curriculum, the center offers Certified Nursing Assistant/Home Health Aide, Culinary Arts, Facilities Maintenance, Medical Office Support, and Painting and Wall Papering. There is also an advanced program associated with the Transportation Communications Union, which opens employment opportunities within the airline, railroad and barge industries.

It’s self-paced learning, provided at no cost to young people ages 16 to 24, and typically lasts eight months to two years. Ninety-two percent of those who complete the program get jobs, go on to higher education or enlist in the military.

In terms of academic quality, Smith Edlund said, the Hubert H. Humphrey Job Corps Center ranks 11th among the 127 centers administered by the U.S. Department of Labor around the country. The center opened on the former Bethel College campus in 1981 and is currently managed by the MINACT Corporation, headquartered in Jackson, Miss. MINACT also runs Job Corps Centers in seven other states.

It wasn’t the case in the beginning, but today nearly 90 percent of the Hubert H. Humphrey Job Corps student body is from Minnesota.

Givens says she’s dismayed by the image that Job Corps may have in the minds of some people, with members of her own family at first believing it to be a “juvenile delinquent center.”

“I told them, it’s a trade school, kind of like high school and college mixed together,” she said.

“There’s an amount of discipline needed to get through here and occasionally there are students who can’t or won’t conform,” according to Smith Edlund. “We get them out of here pretty fast.”

Givens says there were, in her opinion, “a few bad apples” in the student body when she arrived at the center, but they were not tolerated and since their departure, “there have been no dramas, no arguing, no fighting, just a great place for learning.”

Roger Bergerson lives in the Como Park neighborhood and is a regular contributor to the Park Bugle.