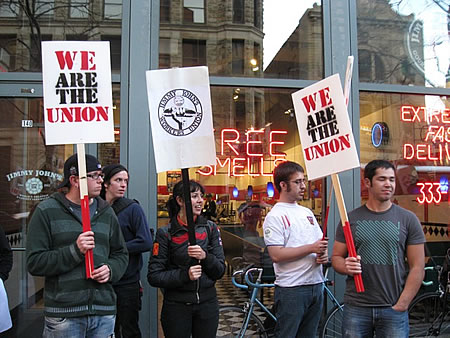 Jimmy John’s workers and supporters rallied Monday, kicking off the final countdown to an unprecedented union election Friday at the Minneapolis-based franchise of the national sandwich chain. If a majority of workers vote in favor of unionization, 10 Minneapolis Jimmy John’s outlets that employ a total of 200 workers will become the first union fast food franchise in the United States.

“A union in fast food is an idea whose time has come. There are millions of workers in this industry living in poverty, with no consistent scheduling, no job security, and no respect. It’s time for change and we are leading the way,” said Emily Przybylski, a union member at Jimmy John’s.

A victory for the union would force franchise owner Mike Mulligan to negotiate with workers over their grievances, which include pay hovering around minimum wage, shifts as short as one hour and pressure on workers to work while sick, organizers said.Since the launch of the union campaign on Sept. 2, the IWW Jimmy John’s Workers Union has been buoyed by an outpouring of public support from a nation reeling from the deepest recession in decades. Supporters have picketed and leafleted Jimmy John’s locations across the country, while endorsements and donations have come in from scores of unions and community groups.

If a majority of workers vote for the union, they would break ground in a sector known for the lowest union density – and lowest wages – in the United States. Only 1.8 percent of fast food workers are represented by a labor union, far below the nation-wide average of 12.3 percent. With union workers in the fast food sector making on average $2.36 more per hour than their non-union peers, unionization has the potential to lift millions out of poverty.

“At Jimmy John’s, we are the union, the workers are the union. We built our union from scratch, just like in the early days of the labor movement. We expect to win this election, and expect to keep growing as long as workers continue to suffer because of corporate greed,” said Ayo Collins, a delivery driver and union member at Jimmy John’s.

The Jimmy Johns Worker’s Union, open to employees at the company nationwide, is affiliated with the Industrial Workers of the World labor union. Gaining prominence in recent years for organizing Starbucks workers, the IWW is a global union founded over a century ago for all working people.