The National Labor Relations Board held a hearing Tuesday and Wednesday to determine whether the local franchise owners broke labor laws.

Mike Mulligan and Rob Mulligan are accused of forcing employees to work while sick and firing six employees for promoting the Jimmy John’s Workers Union.

The union first held a vote to be officially recognized by NLRB in September 2010 but failed by a two-vote margin. The workers believed the Jimmy John’s management used illegal tactics to sway the vote and filed charges with NLRB.

In January 2011, the union reached a settlement with Jimmy John’s. They agreed to set aside the initial results and hold a new election, which is still pending.

The union organizers continued to promote their cause, including campaigning against a Jimmy John’s policy that prohibits employees from calling in sick to work.

Last spring six core members were fired –– an action they claim to be retaliation for their efforts to promote the union.

“The actions we took were not only legally protected but also necessary given how terrible the conditions are at the chain,” said former employee Erik Forman. 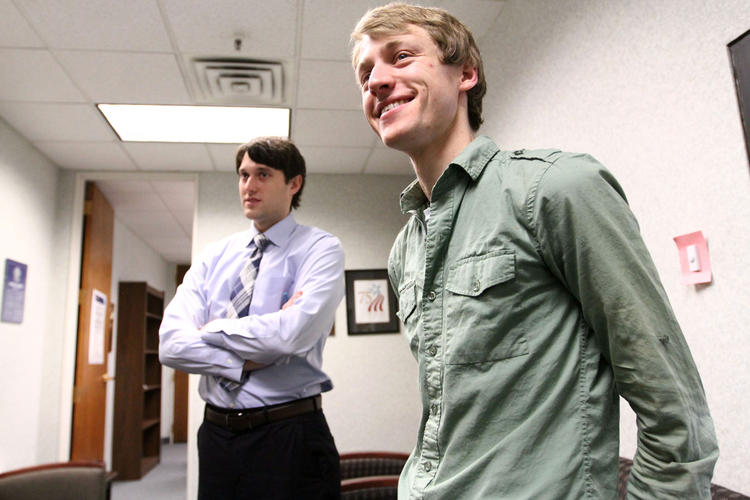 Erik Forman, right, stands with his attorney Tim Louris on Wednesday at the National Labor Relations Board office of Minneapolis. Forman was terminated from Jimmy John’s in the spring of 2011.

On Tuesday, multiple former employees and one current employee testified that they often saw sick coworkers making food at the restaurant. The witnesses also provided anecdotal evidence of being forced to work while sick themselves.

Mike Wilkow, who briefly worked at the Dinkytown Jimmy John’s in 2007, testified that a manager refused to let him go home after he vomited during a delivery.

Mulligan’s attorney worked to discredit the witnesses by pointing out that none of the former employees are “food experts.”

Rob Mulligan testified that the hiring document that included the contested policy has not been in use since 2010.

Rob Mulligan said he would not comment on the hearing in depth.

“We will prevail,” he said.

The board’s decision will not come for three to four months. If the judge rules in the union’s favor, Jimmy John’s will receive an order from NLRB to rehire the terminated employees and provide them with back pay for the time they were unemployed.

Jimmy John’s could appeal to a federal district court and — depending on the ruling — to the U.S. Supreme Court.

Marisa Wojcik contributed to this report.