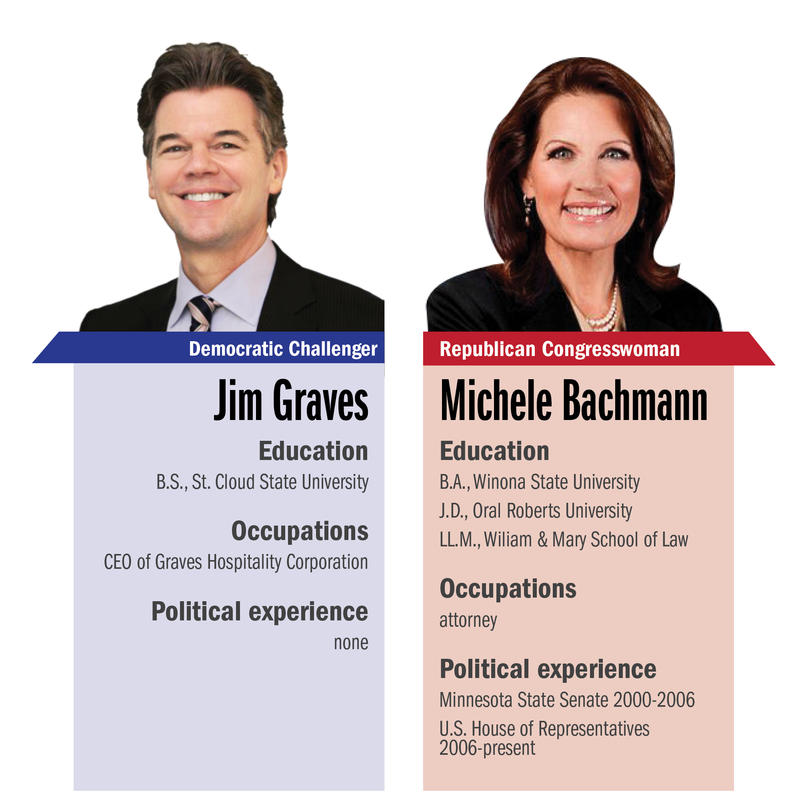 As the Congressional race draws on between Republican U.S. Rep. Michele Bachmann and Democratic challenger Jim Graves, the most pressing issue facing the 6th District may be the candidates themselves.

Although jobs and the economy are important to the district like everywhere else, Bachmann’s contentious statements and presidential bid have cast her as the most prominent aspect of the race, for better or worse.

“I feel like I’ve been extremely well-received coming back after the presidential, and I am looking forward to being able to represent this district again in the United States Congress,” Bachmann said.

Her opponent is a successful businessman and CEO who has been fighting an uphill battle to gain recognition and voters in the Republican-leaning district.

Graves has no previous political experience, but he plans to bring his business approach to politics.

“I just totally ignore the whole thing about Republican-Democrat because it makes absolutely no sense to me,” Graves said, pointing out that in business, he never asks people their political party.

“The question is: Is Bachmann living up to what should be her strength as an incumbent and a conservative?” said Larry Jacobs, a political science professor in the Humphrey School of Public Affairs at the University of Minnesota.

“And I think the answer to that is no. She’s probably struggling more than she should.”

Opponents and experts have questioned how much Bachmann has actually accomplished during her six years in the U.S. House, and some suggest she’s been more preoccupied with the national limelight.

Jake Adamson, a political science senior, said he thinks Bachmann has done a great job representing the district, especially with helping to get the bridge built.

“She delivers headlines, but she hasn’t delivered anything else,” said Casey, who grew up in Annandale, Minn.

Jacobs said there is some resentment toward Bachmann in the district for perceived neglect following her presidential campaign.

“People want to hear more about what she’s done back home, and the truth is, not much,” Jacobs said.

Though lacking a political background, Graves has a long history in business, including founding the AmericInn hotel chain. That grew into Graves Hospitality Corporation that manages hotels like the upscale Graves 601 Hotel in Minneapolis.

He realized things were getting so bad and antagonistic that he decided to come out of his comfort zone and get involved in politics, he said.

Although the district only includes seven counties that surround the metro area, students from across the state have gotten involved.

Students for Jim Graves is a University group that phone-banks and door-knocks for the candidate.

“Michele Bachmann is arguably Minnesota’s most famous politician and not for good reasons,” said Casey, a volunteer with the campaign. “We’re hoping to emphasize that this is our shot to get rid of Bachmann, and I think we can all get behind that.”

Though not from the 6th District, economics and political science senior Shiva Maniam said he thinks it’s important to get involved because Bachmann represents Minnesota and every vote counts.

“I just think Bachmann is not a good politician, and I don’t like the things that she stands for and says,” said Maniam, another volunteer with the campaign.

Accounting and finance sophomore Quinn Jurgens, however, said Bachmann is well-suited for the job.

“What she does, she does well, and I believe she represents her district well.”

As for Graves, Jurgens said he doesn’t think Minnesota should have somebody like him in office.

“He has absolutely no government experience, and I don’t see him as a good fit for the district that he is currently running in,” he said.

Students campaigning for her opponent, however, say he would better represent Minnesota and are trying to get Graves’ message to as many voters as possible.

“He’s very appealing to people in the middle, as well as people on the left,” Casey said.

Both Bachmann and Graves said that the biggest issues facing the district right now are jobs and the economy, echoing the sentiment across most of the state and nation.

Bachmann has heard from business owners who are concerned and express uncertainty in the economy and its direction.

“The No. 1 reason they’re not hiring additional employees is because of the costs associated with the president’s health care plan, also known as Obamacare,” Bachmann said.

The federal government, she said, needs to convey that it won’t continue to accrue more debt.

“If we send a signal that taxes won’t need to go up and that the regulatory burden will be cut back, that will send the signal to businesses that they can invest,” she said.

Graves said he will approach the issues using his “strong background in free markets and business.”

“They’re looking for somebody to go to Congress that’s going to make a difference, not go there to make a statement for some other political party or some personal agenda, but somebody that can actually get things done and get this economy back on track,” he said.

Graves said he’ll work for solutions based on merit, not partisan lines.

“We can do this, but we need to think outside the box,” Graves said.

Though it’s a closer race than many expected, it remains unclear how tight it will be on election night.

The Democratic Congressional Campaign Committee added Graves on Monday to the “highly competitive Red-to-Blue program” that denotes races that could tilt in Democrats’ favor.

“There’s not as much enthusiasm for Michele Bachmann as there once was in her district, but it’s still a big Republican district,” Jacobs said.

“I still kind of consider it Bachmann’s race to lose.”