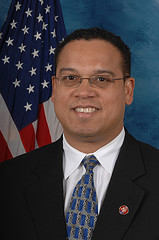 An anti-Muslim campaign commercial by a candidate challenging U.S. Rep. Keith Ellison in the Fifth District DFL primary has been condemned by the Jewish Community Relations Council of Minnesota and the Dakotas (JCRC).

The commercial, which aired on at least one local TV station, was created by the candidate, Gary Boisclair. It begins with an image of Ellison’s 2007 ceremonial swearing in, when he placed his hand on a copy of the Koran, which belonged to Thomas Jefferson.

Boisclair narrates the commercial: “Congressman Ellison swore an oath to uphold the Constitution on a Koran. The Koran says Christians and Jews are infidels. The Koran says Christians are blasphemers who should have their hands and feet cut off and that they should be crucified and killed. Do you really want someone representing you who swears an oath on a Koran, a book that undermines the Constitution and says you should be killed?”

In a statement sent to the Jewish World on Aug. 8, Steve Hunegs, JCRC executive director, condemned Boisclair’s attack on Ellison, which he termed a “hateful political attack ad focusing on… Ellison’s religion. The ad rings in character impugnment tied to religious faith and not Representative Ellison’s actions as a public official.”

Hunegs said that Ellison is “a friend to the Jewish community and we have enjoyed a strong working relationship with him since he assumed office” in 2007. The JCRC director also pointed out that the U.S. Constitution “guarantees that ‘no religious Test shall ever be required as a Qualification to any Office or public Trust under the United States.’”

“Mr. Boisclair’s television ads are clearly designed to divide Minnesotans and spread fear,” Ellison campaign manager Will Hailer told the Star Tribune. “With his official residence listed in West Virginia, it’s not surprising that Mr. Boisclair’s views are out of touch with Minnesota values. Conversely, Representative Ellison is a proud advocate for inclusion, dialogue and a woman’s right to access comprehensive reproductive health care.”

Ellison has been subjected to similar attacks based on his religion by previous political challengers. More recently, Rep. Michele Bachmann, who represents Minnesota Sixth District in the U.S. House, alleged that Ellison had ties to the Muslim Brotherhood and Islamist extremists.