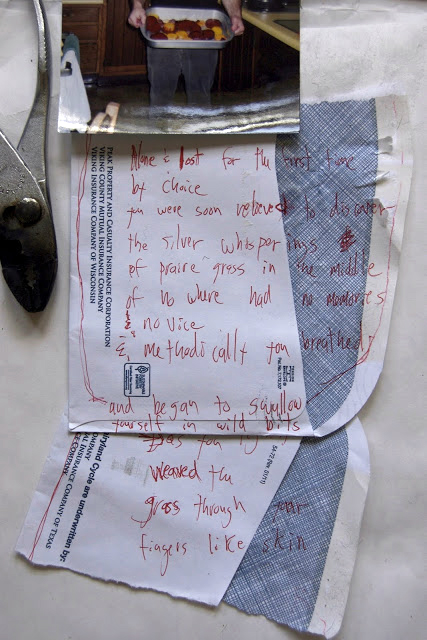 Jeffrey Skemp's poem "No Memories, No Vice" from SPENT

Despite a great number of near-meets, sightings, and acknowledgements of friends-of-friends, I still haven’t met poet Jeffrey Skemp. Prior to October 18, I had watched him read once, at the Hazel and Wren Words at WAM open mic last February, and in June, noticed him watching (and enjoying) Sierra DeMulder, Haley Lasche, Cary Waterman, and Richard Robbins reading at a Maeve’s Session, while I sat hoping that he would get up and read as part of the open mic. No dice.

While it’s not my intention to make it sound like I’m stalking and journaling my every interaction with the local poet, I do bring these details up for a few reasons. One, I had assumed that Skemp was a dabbler. He is not. Turns out he just likes performing and taking in poetry where and when he can. He’s been performing poetry and stories in the Twin Cities for over 15 years, and for the past four years has been participating in the monthly Bosso Poetry Co. readings at Dusty’s Bar NE. Two, both times I’ve seen him read, his performance surprised me.

On October 18, Skemp and a rather large group of musicians—including Ben Durrant, JG Everest, John Colburn, and Karen Townsend, all of whom are friends of the poet’s—put on an interesting show at the Bryant-Lake Bowl, pairing Skemp’s poetry with music and occasionally video. The two-hour show offered the audience 19 of Skemp’s poems and a few instrumentals from the Greg Schaefer Trio. Some of the poems came across more like regular chorus-verse-chorus songs, with the poet singing and speaking alternately (this reminded alternately of both William Shatner’s and Johnny Cash’s infamous covers albums) and other poems weren’t set to any music at all. One poem, titled “The Darling Ones,” made use of not only live music and video, but also a tape recorder with Skemp’s voice, repeating lines he was speaking live. While the clacking of the play and stop buttons being pressed was a little distracting, on the whole this particular part of the performance was one of my favorites of the night.

Describing the performance is great, but what I really wish I could have walked away with thoughts on is Skemp’s actual poetry. The music was lovely and Skemp’s deep voice is stirring, but together, along with watching the live performance (one poem even included sound effects from a bucket of water being sloshed around in on stage), it became increasingly difficult to pay attention to the poetry. However, he did perform the poem I had heard him read at Words at WAM, “Capt. Ocean-Talk,” so I did have a little point of reference about whether or not what the whole show was working.

For me, the performance of the poem with the music wasn’t as exciting. Whether that’s because at the open mic I was hearing the poem for the first time, and at the time was elated when my awkward confusion melted into silly joy as the audience loosened up and took the ride to the bottom of the Bering Sea, or because Skemp didn’t use his deep voice in the same way, to build curiosity or suspense, as the music was doing that for him, is anybody’s guess. It did make me think that the music acts as a cue for listeners, sort of explaining how to feel about the words in a way that didn’t make me listen as hard to what was being said.

The tidbits of Skemp’s poems that I did take away had to do with both infidelity and fishing. When I asked the poet about these themes he said, “Mostly it’s coincidental,” citing his interest in the varying reasons for infidelity, and his experience working on a fishing boat in his youth, and falling in love with the ocean.

Although the night may not have completely connected with me as a fan of poetry, and as someone interested in the potential of Skemp’s work, it brought me immense joy to witness the BLB full of people supporting the poet. After all, I’m pretty sure that I might have been the only person in that theater who didn’t know Skemp personally. When I asked Skemp about how it feels to be an artist with so much support he said, “Really lucky. I mean it.”

If you’re interested in hearing some of Skemp’s poetry set to music,  buy his album SPENT, or check out some of the tracks (including “Captain-Ocean Talk” and another favorite “Oceans of Straw”) on Bandcamp.