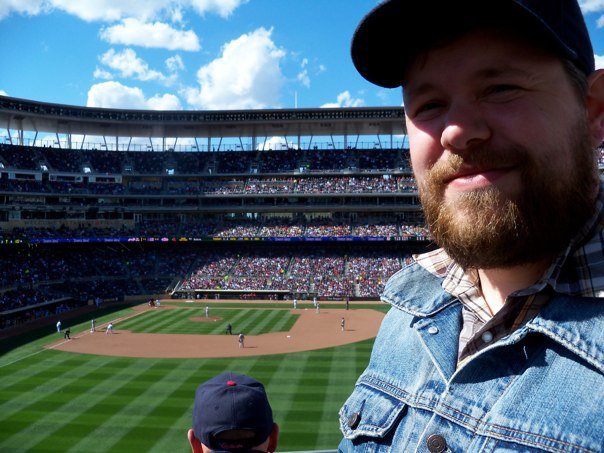 What’s your job?
“My current job is teaching drum lessons at Twin Town Guitars. I used to book shows and work at The Beat Coffeehouse in Uptown.”

Other than your job, what are your claims to fame?
“I have played in a few bands around town, but my claim to fame is probably from The Beat. My current band, the Cavalier Crooks, are currently working on our first full-length record, which will hopefully be out this fall. We’ll be playing a bunch around town after the release.”

What’s your relationship status?
“I am married, with a baby boy due to be born in early December. Super pumped about that!”

Where are you most likely to be seen?
“I am most likely to be seen around South Minneapolis these days. I’m finding I stick close to home. My new favorite is the Town Hall Tap. I’m also a big fan of Buster’s on 28th. I like to catch shows at Cause or the Turf Club. The 331 is also a cool spot. I drink a lot of coffee, especially at dog-friendly coffee shops like Sister’s Sludge and The Beat, or at the new Bull Run when I’m at Twin Town. Try the Iced Nutz: Nutella, coffee, and chocolate is absolute genius. I’m also a huge Twins fan, and have a season ticket package, so I’m at Target Field a lot.”

Where are you least likely to be seen?
“I don’t actively avoid many places, but I don’t make it to Northeast much. Actually, I always say I should hang out there more because it’s nice, but it seems so far…”

With whom are you most likely to be seen?
“Honestly, I am most likely to be seen with my dog Lola. Otherwise with my wife Anne, at shows with my bandmates Josh and Quinn, who are also a couple of my best friends, or my good friend Dave. Dave’s the guy who is always up for anything. Everybody needs a friend like that.”

Where were you born?
“I was born in Crookston, Minnesota—far northwest—and moved around a lot until I was eight, when we settled in Grand Rapids, Minnesota, which I consider my home town.”

What neighborhood do you live in now?
“I live in South Minneapolis, in the Northrop neighborhood.”

What’s your ride?
“I drive a ’98 Nissan Maxima with a cracked windshield and a missing spoiler. It gets me around when I have things to carry. Being a drummer it tends to be that way. I also bike quite a lot, especially around South Minneapolis.”

What’s the best way to start a conversation with you?
“Probably via Twitter or Facebook—or if you see a guy walking a white boxer around South Minneapolis, just say hey.”