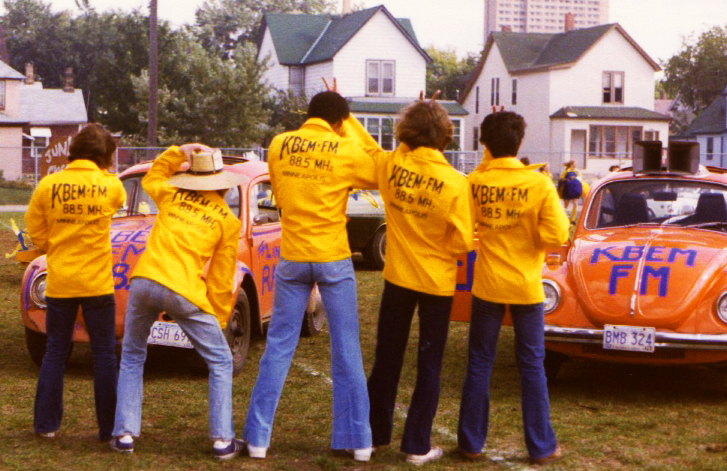 A photo from the KBEM archives

At one point jazz was America’s favorite music, but today, the country has only 30 full-time stations dedicated to the genre. Not good news. On the bright side, Jazz88 KBEM 88.5 FM, “the Twin Cities’ radio voice for jazz and education,” celebrates 40 years on the air with a weekend of gala fund-raising events on October 23 and 24. That Saturday, International Market Square hosts an gala evening catered by D’Amico, silent auction, dancing to the Wolverines Big Band with guest vocalists. Sunday, Grammy-winning vocalist Karrin Allyson performs for a five-course dinner at Vic’s on the Minneapolis riverfront. Saturday is $88.50. Sunday is $125. Tickets are available at Jazz88FM.com.

Licensed to the Minneapolis Board of Education, KBEM broadcasts from North High School in Minneapolis and trains high school students in broadcast communications. Station manager Michele Jansen has been at the helm since 2005, after a track record that includes working at several radio stations throughout Wisconsin, eventually landing at Minneapolis country station K102 as production director. She has been media director at Luther Seminary and put in time freelancing as an audio engineer and as on-camera and voice talent. Jansen joined KBEM as producer of the progam Jazz and the Spirit, an exploration of jazz as a spiritual expression. She answered my questions by e-mail.

There couldn’t be two more disparate genres than country and jazz. How was the culture shock, going from one to the other?
I don’t believe they are all that disparate. Jazz and country share many elements: melody, improvisation, and sometimes, swing! Having said that, I swore I would never work at a country station when I graduated from Brown [Institute]. I have extremely eclectic tastes, and I have to say, that I’ve always liked true country music; Patsy Cline, Hank Williams, Willie Nelson, the whole outlaw set. I like the Stones and Prince. I love Mozart and Chopin. But my first and true love is jazz.

How was it exploring “jazz as a spiritual expression”? What was most rewarding about it? What was most challenging?
Well, I’m still exploring it with my show Jazz and the Spirit [Sunday nights at 8 p.m.]. Steve Blons and I just interviewed Sunny Jain, a drummer from New York whose parents are from India. He takes Sufi songs and turns them into jazz. We have found, through our interviews with many musicians, that jazz is more than performance or an artistic expression. It is a spiritual expression that fulfills them and has the power to heal. It’s rewarding to hear from people asking where they can get the amazing music they heard on our show, because they’ve never heard it anywhere else. The amount of time it takes to produce the show is the most challenging part. We spent at least 40 hours on the Dave Brubeck show we did…an hour finished length…and that did not include pre-production.

How has it been, leading the station out of some lean times? What was your first priority in taking the bull by the proverbial horns?
Looking for new sources of funding, and re-building the educational program. The station’s budget had been cut nearly in half. We got very lucky that CPB (Corporation for Public Broadcasting) changed their grant formula, and as a result we got a lot more money from them. Also, the Gopher women’s basketball games fell into our lap, and that brought us revenue. We put the focus back into the educational program so that we could attract the best students. The staff re-focused their efforts to make the best educational program possible. Now there is an online class that’s available to anyone in the district, and beyond.

How satisfied are you to date with the job you’ve done?
Evaluate myself in public? I don’t think so. I’ll let the listener—and my boss—decide. Actually, I’m never satisfied. I can always do better.

After October 24, what’s next for the station?
We’ll just keep on swingin’. We feel really blessed to have gotten some of the arts and cultural heritage funds from the state of Minnesota through AMPERS (Association of Minnesota Public Educational Radio Stations). We’ve produced excellent programming with it this past year, and even more is coming this next year.