Most 74-year-olds are well into retirement enjoying their golden years.

But jazz horn legend Hugh Masekela is working harder than ever, touring the nation showcasing works from his vast and illustrious career. Masekela is performing along with Larry Willis this Tuesday (June 11) at the Dakota Jazz Club, 1010 Nicollet Ave., Minneapolis. The duo has two shows; one at 7 p.m. and another at 9 p.m. Tickets for the early show are $40 and $25 for the later show.

Masekela, a native of South Africa, is known as much for his 50 plus year music career as he is for his efforts to end Apartheid in his homeland. An acclaimed horn player, Masekela won a 1968 Grammy for Best Contemporary Pop Performance – Instrumental for his song, “Grazin’ in the Grass.” 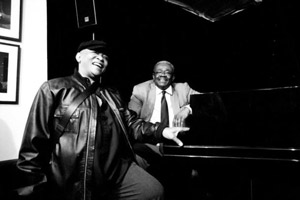 So, what keeps a man deserving of a cushy retirement going? For Masekela, it’s simple – music is his life.

“I’ve been performing all my life,” said Masekela. “Music keeps me going. It’s my life. When you ask me what keeps me going, that’s like asking someone, ‘How have you been breathing so long? What keeps you going?’”

Known as a trumpeter, Masekela will offer fans a bit more during his Dakota performances, as he will be singing as well.

“It’s a mode most people in Minneapolis haven’t seen me in,” said Masekela. “Everywhere we go it’s blowing people away. I really enjoy it.”

If the show seems like a gathering of two old friends on stage, well that’s because it is. Masekela and Willis have known each other for more than 60 years. The duo has recorded a 40-song box set from which they will showcase.