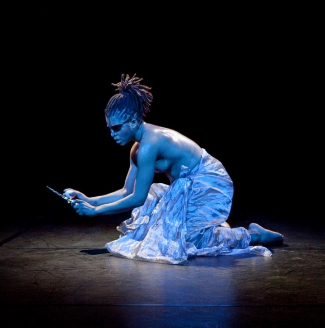 However, her explorations into sensuality and eroticism veered in a new direction under the culture wars of the late 1980s, when the likes of Jesse Helms and others were censoring all aspects of the arts. “It got harder to do the work I was doing at that time,” she said, “so I switched.” Her work went more in the direction of protest, resistance, and anger. “In some ways society was more comfortable with an angry black woman,” she said. “They are less comfortable with a sensual black woman.”

Her company, Urban Bush Women (UBW), is based in Brooklyn, New York and is made up of women of African descent.  For over 25 years, the critically acclaimed company has performed numerous times at the Walker Art Center.  They have presented their work around the world and recently they were selected by the U.S. State Department as one of the three U.S. dance companies to inaugurate its DanceMotion USA cultural exchange program, where they have assumed the role of artist-diplomats.

UBW have also been active in community engagements, conducting residencies that result in public performances. They also run a summer program called the Summer Leadership Institute, which is a training program in dance and community engagement, addressing issues of social justice.

This weekend UBW present Zollar: Uncensored, which revisits Zolar’s earlier choreography. “I’m riffing off my earlier work, but at the same time it speaks to where I am now,” she said.

“It’s very dense,” she said of the show, which presents a journey of experience.  She notes that embedded in the storytelling is a collective narrative.  Zollar grew up in segregation in Kansas City, Missouri. “While I was aware of segregation in some ways,” she said, “I wasn’t aware of places I couldn’t go.”  Yet she did know that there were places where her family didn’t go. Her first contact with white people was when she was in college.

In Zollar: Uncensored, the choreographer aims to “look at the hopes and aspirations and dreams of a people.”  In addition to the collective narrative, Zollar also integrates a personal narrative, trying to discover how an individual finds their way through trauma.  The show looks into, she said, “how we recover ourselves when society continually says you are too this or too that.”