A metamorphosis of sorts took place on June 1 when the Java Train coffee shop on Pascal Street near Midway Parkway became the Como Park Grill.

Gone are the banana lattes, although there still are coffee drink offerings. Gone are the caboose and the rest of the play area, though children remain welcome and there’s still plenty of ice cream.

“The restaurant business is very difficult and you have to reinvent yourself from time to time,” said co-owner Steve Finnegan, who with his wife, Christine, opened the establishment nearly a decade ago.

“We needed to depart from the coffee shop persona,” he said. “There’s a lot of competition for the coffee dollar and you need high-volume sales to be profitable enough. We chose the name Como Park Grill to convey that we’re a full-scale restaurant.”

Although the majority of menu items remain the same, there are several new dishes, including tacos, Reuben and Rachel sandwiches, and a spinach-and-apple salad. The owners hope to add burgers and fries by the end of the summer.

Other changes mostly are cosmetic: new paint, newly polyurethaned booths, a bar replacing the old counter. There will be several TVs, but Finnegan says the Grill won’t be a sports bar. The exterior of the building also will be repainted and the existing mural modified.

The outdoor patio area remains, as does the faux water tower harkening back to the Java Train days.

There’s no doubt, though, that the elimination of the play area is what has people in the neighborhood talking. 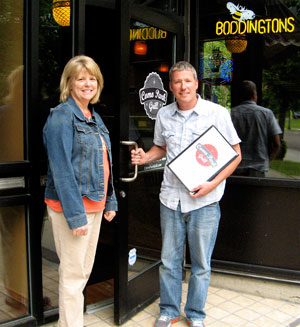 “I’ve had some negative comments from parents with small children who didn’t want to see it go, but I believe we lost business from people who were turned off by the noise the area generated,” Finnegan said.

“Change isn’t always popular. A few people in the area definitely were opposed to us opening in the first place and others objected when we added beer and wine. You can’t please all the customers all the time, but overall I think we’ll be presenting a more comfortable dining experience.”

Ed Dykhuizen is one of those lamenting what he sees as the demise of a “one-of-a-kind, perfect neighborhood spot,” where he would walk with his 2-year-old daughter for ice cream. “This is disappointing to see,” he commented. “I’m afraid it’s going to be another Champps and we don’t need another one of those.”

Parent and longtime customer Lori Treiber said is happy that a restaurant such as the Como Park Grill is so close to home, especially during the school year when she may not have time to make dinner.

“It’s still going to be family-friendly, just not a play destination,” she said. “Having a place like this in the neighborhood gives it a small-time feel. Steve and Christine have given us a wonderful place to gather.”

Roger Bergerson is a local historian and a regular contributor to the Park Bugle.