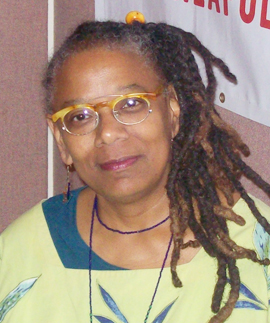 Music always has been a part of Janis Lane-Ewart’s life; rhythm and blues was the norm in her home while growing up in Chicago. Although her aspirations initially were to pursue law, and Lane-Ewart studied political science in college, she eventually became an administrator for Chicago Music Collective.

When Lane-Ewart relocated in 1989 to the Twin Cities, she worked with a local arts organization. But then the proverbial “phone” rang and her career changed directions.

“The radio business called me,” she recalls of her first foray into radio when she became a volunteer at KFAI Radio to host a weekly jazz program. That program, “The Collective Eye,” is heard Saturday afternoons.

Another directional change in her career later occurred when during a management meeting something was said that “struck me the wrong way,” notes Lane-Ewart. “It made me realize that I had skill sets that would be advantageous to the organization,” she remembers.

Lane-Ewart became KFAI executive director in 2001 and today she is the Twin Cities’ only Black female radio station manager. KFAI “Fresh Air Radio” came on the air in 1978, broadcasting from Walker Community Church, and then later moved to Lake Street and Bloomington in 1986.

Their current studio has been on the city’s West Bank since 1991, “right in the heart of the Somali and Korean communities,” says Lane-Ewart. The non-commercial community station can be heard on two FM frequencies: 90.3 in Minneapolis and 106.7 in St. Paul.

Whether locally or nationally, there aren’t many Black women station managers either in public radio or commercial radio, reports Lane-Ewart. “When I started in 2001…less than 12 percent of the news departments across public radio were headed by women, and the number of people of color was even less: nine percent. I went to my first [broadcasting] conference in 2002. I succinctly remember meeting six or seven other Black people in an audience of over 200.

“This year I went to that same conference in Houston,” continues Lane-Ewart, “and there were Native Americans, Latinos and African Americans, and the numbers were three or fourfold what it was in 2001. I find that there are still limited opportunities for African American women to be leading community radio stations that aren’t Afro-centric or culturally specific. We are still very few in numbers.”

KFAI upgraded its signal several years ago, which increased wattage power allowing the station to be heard as far east as Stillwater “and sometimes into Hudson [Wisconsin] on a clear day,” says Lane-Ewart smiling. “This allows [us] to have a greater impact in South St. Paul, where there are a number of bilingual communities that we serve, and now they can hear us.”

More importantly, Lane-Ewart’s overall goal is for KFAI to be consistently listener friendly — a two-way exchange between the station and the listeners — to speak to their listeners and the listeners always feeling free to speak back. This, she believes, is what set community-based stations such as hers apart from commercial entities.

“I like more of [the] listeners calling in and say[ing] they like this, or don’t like that,” explains the station manager, “that we are committed to that exchange, that we offer every opportunity and access to that kind of involvement.

“When [the on-air personality] opens the mike, and [is] playing a song, or more importantly in our public affairs programs, they understand and have all the skill sets available so that they know that they are inviting comments that are either pro or con to the topic that is being received, that they are making use of the community resources in terms of subjects that should be explored… They are inviting listeners to call and provide a response, or send us feedback through Facebook or Twitter.”

Furthermore, Lane-Ewart wants her mostly volunteer staff to fully understand that KFAI is not “an internal radio club. It is a vehicle for exchange of information and access to whomever wants [it], needs it and if they don’t know that they need it yet, we should be in a position to present them [with reasons] why they need us.”

Lane-Ewart also is proud of the station’s popularity among the Somali immigrant communities. A Somali-oriented program was first aired in 1994, and later there was a three-year partnership with a local health organization that produced programming on Somali health issues. That helped create “the kinds of relationships and partnerships that we have been able to forge and maintain…the level of trust and respect that we have developed with community members. They feel welcomed coming here,” she adds.

Social media has become an essential part of KFAI: “We began to embrace social media and established a Facebook page in 2011,” says Lane-Ewart. “It has impacted us from the perspective that once you make that available to your constituents, you have to monitor it 24/7.

“It has made a big impact on us because we are asking people to keep up with us and provide [us] with information that they may not want to call in or tell us about.” Lane-Ewart says plans are underway to secure funds in order to hire a person to “just monitor Facebook and Twitter” at the station.

Fundraising remains a constant task and challenge at KFAI. “I think the other challenge that we are continuing to manage and pay attention to is the ways in which non-commercial radio stations have to consistently engage [our] listeners so that the listeners recognize that this is a valuable institution.”

Lane-Ewart notes that her immediate short-term goal is to become an “active listener” in order to better connect with KFAI listeners. “I am really looking forward to having more disposable time to [devote to] actually sitting down and talking with listeners,” she concludes.

“Not to ask them for anything, but to be able to designate a certain day of the week where all I am focusing on is going out and meeting yet a different listener and hearing what they have to say about their community, about what’s affecting them in a positive or negative way; what they appreciate or don’t appreciate about the station.”