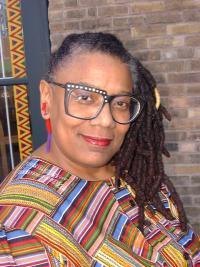 As if to complete the trifecta, this week Janis Lane-Ewart became the third female executive director of a Twin Cities community media institution to leave her position, following Pam Colby from MTN and Jane Minton from IFP. Lane-Ewart, who had been the executive director of KFAI since 2001 (and host of the jazz program The Collective Eye before that) oversaw the organization during a transformative time for community radio stations, during which the station has become not just about transmitting over the airwaves, but also about connecting to people through the web and social media as well.

On its website, KFAI, which was founded 35 years ago at Walker Community Church and now is based on the West Bank in Minneapolis, states that Pam Hill Kroyer, now in her 13th year with the organization, has been appointed acting executive director for the immediate future.

During Lane-Ewart’s tenure, the organization has become more diverse. Part of her legacy has been the implementation of Youth News, which gives young people an opportunity to gain skills and have their voices heard.

“She left a mark on that station,” said Allison Herrera, who has had various positions with KFAI over the years, and currently produces Minnesota Legacy-funded programming. “She tried to bring in more people of color involved with station. Without her, the Youth News station wouldn’t exist. That was her program, and she deserves to be recognized for that.”

The station began to lose audiences in 2005. In the years since then, the station has looked to the Internet as a way to join the 21st century, not without controversy. It has gone from a station that updated its website once a week to a station that provides archived content from all the shows on its website, and increased its social media presence.

Recently, the station has not met its pledge drive goals, a situation that has caused low morale, as well as instability. KFAI is currently on its third news director in six years, and also has had turnover in the program director position.

This year, the Corporation for Public Broadcasting decreased the amount of money that it distributed, according to board minutes. On top of that, the state legislature decided this year that grantees of Arts and Cultural Heritage funding wouldn’t be paid in advance, but rather had to be reimbursed, which stressed the cash flow of the station.

Chris Dronen, president of KFAI’s board of directors, declined to comment on the reason for Lane-Ewart’s departure. As for the future of the organization, he said that KFAI has been working on a strategic plan for the last two years and a number of planned initiatives are aligned with the goals and ideas of the strategic plan.

“The entire broadcasting community is in a state of flux,” he said. “There are challenges for funding—there’s lots of new media that are in competition.” He said KFAI plans to take more advantage of the web, with more streaming, and producing original content. “We’re changing our focus from being just a radio station to being a content producer,” he said.

He noted that after controversy over the nationally syndicated Takeaway program, they’ve changed that slot to a locally produced show. “I think we are going to be looking more at opportunities for people to be doing programming,” said.

Dronen said that KFAI also plans to get new audiences: “That’s our biggest challenge.” Whether over the airwaves or over the Internet, “our goal is to get more people listening,” he said, “and more traffic to our website.”

As to how they will generate new audiences, Drone said that is still in development. “We continue on with what we’ve been doing in the past, and try every avenue that we can,” he said.

In April of this year, the board went into a closed session for a “personnel matter” being considered by the executive committee. Upon return to open session, board member Jason Reed proposed a motion that stated, “The KFAI Board of Directors formally states it has confidence in the current leadership of the organization by its Executive Director, Janis Lane-Ewart.” The motion passed with two abstentions and one no vote. There were 13 board members present.

In September, the minutes of the board meeting included an addendum that read “2012 Goals for Executive Director,” which were “developed by the Executive Committee during the ED’s performance evaluation process.” The stated goals included increasing listenership and underwriting, marketing presence, media coverage, and participation in community entertainment opportunities. Other goals included turning around the morale of staff and members, increasing delegation to volunteers, developing metrics to measure increased volunteer involvement, developing new revenue, and strengthening ties with the West Bank businesses and organizations.

Lane-Ewart grew up in Chicago and, after a stint as an administrator for the Chicago Music Collective, moved to the Twin Cities in 1989, according to an article by Charles Hallman for the Spokesman Recorder. She volunteered for KFAI and hosted a weekly jazz program called The Collective Eye, and eventually became the organization’s director in 2001.

Lane-Ewart was quoted just last month in the Spokesman-Recorder, saying that fundraising was a challenge. “I think the other challenge that we are continuing to manage and pay attention to is the ways in which non-commercial radio stations have to consistently engage [our] listeners so that the listeners recognize that this is a valuable institution,” she told the Spokesman-Recorder.

According to Allison Herrera, in recent years there’s been some turmoil within KFAI over the programming changes that were enacted two years ago. “KFAI realized they had low Arbitron ratings, and needed to switch the programming grid,” Herrera said. “Janis was caught between the programmers that wanted to keep things the way they were, and the people that said KFAI needed to change things.”

The station added more news and national shows to the morning programming, which angered some, who said that the station should compete with MPR.

Herrera said that at times, people look out for their own interest as opposed to what is good for the station.

As the Executive Director, Lane-Ewart’s primarily responsibility was fundraising, which has been in decline. However, Herrera said there has never been any question of any mismanagement of funds. “Janis tightly controls the finances,” she said, “she makes sure the checks get written, and managing the day to day operations.”

Ann Alquist, a former news director for KFAI who worked under Lane-Ewart from 2001-2006, and who is now the Director of Radio Engagement for the National Center for Media Engagement, said her impression of Lane-Ewart was as a smart, savvy nonprofit leader. “I think she has the respect of her peers nationally in community radio,” she said. “She has served on the board of the National Federation of Community Broadcasters, and is regularly tapped to share KFAI’s work around the country.” (Alquist has also worked for the Twin Cities Media Alliance, nonprofit publisher of the Twin Cities Daily Planet.)

KFAI is unique, said Alquist, especially as it provides media access for non-English radio. “It goes to the heart of the station’s mission. She has always been an advocate for that,” Alquist said.

She also has supported other media startups, not seeing them as competition but rather embracing them, according to Alquist. In fact, under Lane-Ewart’s tenure, the Twin Cities Media Alliance was founded with KFAI as its fiscal agent. More recently, Lane-Ewart has supported smaller, low-power radio stations.  “She’s welcomed others who want to improve represenation in the Twin Cities media landscape.”

The challenges that KFAI faces are not unique, Alquist said. “There are people who are very proprietary in their roles because they are giving their time.”

“These are the challenges facing community radio,” Alquist said. “How does it sustain itself? KFAI is a microcosm of that question. There are several stations going through the same issue.”