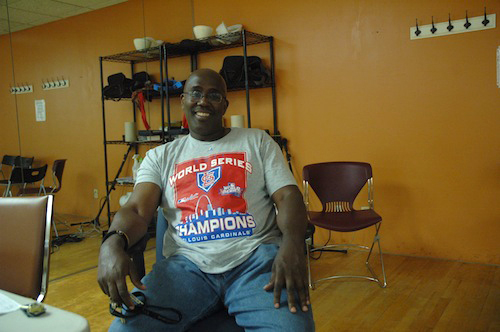 My name is James Williams, but everybody calls me Jayy Dubb. I’m originally from St. Louis, Missouri, and I’ve been in the Twin Cities since 1973. I came here to go to Macalester College, and my first professional theater job in the Twin Cities was with Mixed Blood in its second season in ’76. I was a founding member of Penumbra Theatre Company and spent quite a few years there.

It was at Mixed Blood where I met Marion McClinton, who’s directing The Brothers Size—a Pillsbury House Theatre show in which I’m currently appearing—so we go back to being in our early 20s together. We’ve been working together for over 30 years. It’s not often that in this business you get to have a continuous ongoing relationship with someone artistically for that extended period of time. It makes the work a joy because we know what we are capable of. We know how to get more from each other. It’s been a fantastic adventure growing up in this theatrical community.

The Twin Cities theater scene has gotten safer. When we were first going, there were theater companies that came into existence that went out of existence like Brass Tacks Theater with Patty Lynch, or Ben Kreilkamp and those guys with Palace Theater, doing things like God’s Dogs. Patty did tons of new plays by Mac Wellman and just off-center playwrights—meaning people just trying things. Red Eye is still in existence, but there were more companies doing that kind of work. Now those kinds of things are captured in the Fringe Festival and it’s relegated to that particular time of year. But there are still people like Wendy Knox, with Frank Theatre doing scripts that are more daring.

We’ve become far more interested in entertaining, in competing to be entertainment rather than to question society and to make people think. I don’t know whether it’s good or bad, but it seems different to me. I look at the body of playwrights that were coming out of the Playwrights’ Center at the time. You had Lee Blessing, August Wilson…

Lee and I played softball against each other. There was a softball league where theaters put together teams and played each other. There was an ongoing Tuesday night softball game where people just showed up and it wasn’t about the competition because we really didn’t even keep score, and you couldn’t strike out. It was about community. There was the actors’ basketball game, where on Tuesdays and Fridays you went down to a little gym on 31st and Aldrich and you ran together, you kept in shape, people talked about what was going on in the community. Everyone played there: set designers, lighting designers, actors, artistic directors, publicity people. It was just this way of getting together that on the surface had nothing to do with the art, but really it had everything to do with the art.

The world right now—we’re on the brink of financial collapse. People seem to have become more entrenched in their ideologies. We’ve got the rise of points of view on both sides that seem to be incapable of compromise. People won’t even sit down and listen to the other point of view, because then your patriotism can be challenged, or whether or not you’re a real American can be challenged. I just like good art.

I’m blessed. Working at Penumbra, working at Illusion, working here at Pillsbury, working with Park Square, working in different places around the country, there are challenges—the obvious, but the reason I say I’m blessed is because I’ve gotten a chance to do almost everything I wanted to do in this business. And I’ve found it to be about the work. If you focus, if you’re good at what you do, and you’re honest about who and what you are, things have a way of working themselves out.

Back in the late 90s, there were shows reflecting an aspect of the African-American experience on stages at Penumbra, Illusion, Children’s Theatre, the History Theater, all at the same time. It wasn’t because we wanted to find a diverse audience. It was because they were the best shows out there at that time. Now we’ve kind of slid into this discussion of diversity and whether it is or it isn’t and in the middle of all of that, it seems like the conversation is more about being politically correct rather than wanting to do the best art.

The five years I was at the Guthrie was in a period of time when there was the great “should the Guthrie do August Wilson, Garland Wright, Lou Bellamy” debate that was going on. People were talking about how Garland wasn’t being adventurous enough to do August’s work. But Garland was kind of a rebel. When everybody else was dong Tony Kushner’s adaptation of Corneille’s The Illusion, Garland didn’t want to do that, so he went and found a gentlemen named Ranjit Bolt from India who had done an adaptation, and we did that adaptation. His sensibility was to not do what everybody else was doing.

The company at that time had some diversity to it, and people were playing leads in all kinds of things. I’m not saying it was paradise, because it was hard, it was very hard to be there knowing that this phenomenon called August Wilson was going on at the same time. I had been at Penumbra when Mr. Wilson came to town and worked on a couple of shows. It was a better deal for me in the business part of show business to go and be at the Guthrie for a little while, and it ended up making me a better actor because of the training that I got while I was there.

I don’t want to lock myself in any kind of box. I spent five years working in classical theater to come back to August Wilson and be a better actor, a better artist, because I’ve had the training. And I came back home, and that’s where I wanted to be. Now I’m back home, and I can do what I need to do. And I ain’t in a hurry to leave it, and go back to anything else right now.

I was blessed enough to be on the ride of the last Wilson play, Radio Golf, from conception to the end—and when I say the end, I mean taking it to Broadway. I was honored enough to work with the greatest artist I’ve ever come across in Mr. Wilson, who inspires me to push my art to another level because I learned what it means to give your all to a thing, and to be 110 percent committed to a concept, to be 110 percent committed to an artistic point of view, and to understand what it means to have integrity as an artist. I’m in a position where a man is spending the last bits of his life for us to put these words on the page for my mouth to say, so I can’t come to rehearsal and be tired that day. I can’t come to rehearsal and have my attitude be more important than what’s going on at hand.

So, I’ve learned a lot, and I’ve learned that it’s not as simple as being a black actor or a white actor. I don’t mean that to say there’s an equality of opportunities for everyone. Of course not. But if you work hard, and if you work honest, and you work on your self as your instrument, as Mr. Wilson says—we are owed the work, not the recognition that comes from it.

The Brothe-s Size is the second of a trilogy of plays—and I pause before “second” because it was actually written first. Last year we did In the Red and Brown Water, at the Guthrie—a Pillsbury House production of it, directed by Marion, written by a gentleman named Tarell Alvin McCraney, who is brilliant. It takes place in Louisiana in I would say an underrepresented community. It’s about love and life and sacrifice and the heart of citizens of that community.

It’s rare these days to see a playwright—especially a young playwright—build a piece around African-American men that contains that kind of emotion in it, that kind of heartfelt celebration of who we are in all of our facets: when we are at our best, and when we are at our worst. We’re not there representing an idea, we’re not there representing a political point of view, we’re not there to discuss a larger issue, we’re in this piece to talk about what society says that we are incapable of: love.

I’m looking forward to it. I was in Red and Brown last year, and I’m really looking forward to this piece. It’s just real, it takes me to a place where inside of this piece I’m a kid, I’m an adult, I’m a son, I’m a father, I’m a brother, I’m all of those things inside of this one piece of work, and that’s what makes me say this young man’s a genius. And we are ably captained by my buddy, Mr. McClinton; we have a fantastic cast—Gavin Lawrence and Namir Smallwood, Ahanti Young—and we have a fantastic movement person in Patricia Brown. It’s going to be fun.

As told to Sheila Regan