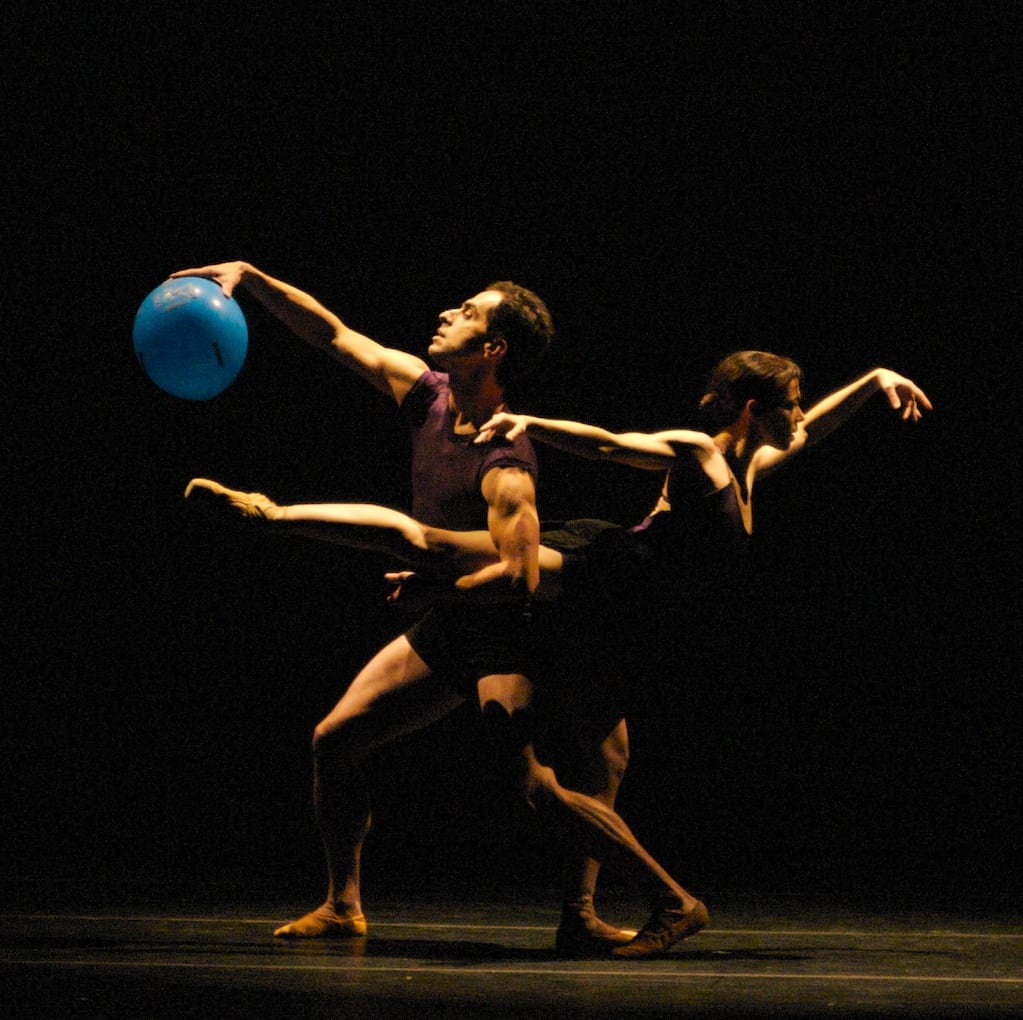 As I walked into the O’Shaughnessy for James Sewell Ballet’s new show Le Dance Off, I was given a wristband that the usher informed us would measure our “biometric information” that was the key to scoring. The orange wristbands, she said, would keep tabs on our pulse, heart rate, body temperature, etc for the dance competition we were about to watch as members of the live studio audience.

So began a very fun satire of celebrity and dance competition television shows such as So You Think You Can Dance and Dancing with the Stars.  Choreographer James Sewell has joined up with the Sassy Mechanics (husband and wife team Megan McMcClellan and Brian Sostek) to create a silly parody that pokes fun at the genre, questioning the notion of competition in art forms, and criticizing (in a very lighthearted way) the commercialization of dance.

In the show, Sostek plays Philipe L’Stine, the slimy host of Le Dance Off, who takes bribes, sexually harasses the contestant of his affection, Penny Nickels (Penelope Freeh) and bosses around Jim Swell (James Sewell).  When he’s on camera, L’Stine has a quasi-European accent of dubious origin, and when he’s off camera, it’s revealed that his act is all a fake. Jim Swell convinces L’Stine into making a documentary about the making of Le Dance Off, which L’Stine agrees to, but because he’s so lazy leaves the editing up to Swell. The audience therefore sees L’Stine unmasked in all his douchebag glory. Sostek is hilarious, and the writing by him and Megan McClellan is smart and clever.

Meanwhile, the competition is taking place.  Most of the dances are very short.  The pieces that are the most successful are the ones that propel the satirical story line.  For example, the first piece, The Star Spangled Banner has the ensemble all in red white and blue spandex culminating in tableau of the American Flag.

Another wonderful moment is the Movement Makeover section. The ensemble at first performs a neoclassical piece set to Bach, but L’Stine says it’s “too boring” so they do it again, this time set to Lady Gaga, with the dancers all sporting obstacles such as crutches, a fake pregnant belly (in a wonderful performance by Cory Goei) or a paper bag over the head.

The pieces that didn’t work so well were the ones that seemed more arbitrarily included, and didn’t seem to fit with the show’s theme. Even though yes, all of the dancers in the company are stellar (and guest artist Sally Rousse is simply fantastic to watch), when the show veered away from the satire, I lost interest. I especially didn’t like the youth dance company Ballet Royale Minnesota whose piece is included—it’s boring and has nothing to do with the rest of the show. Also, the first half of the performance has a lot more energy than the second.

Still, I thoroughly enjoyed myself, and I highly recommend you check it out. Sostek is wonderful, and it’s a lively evening.