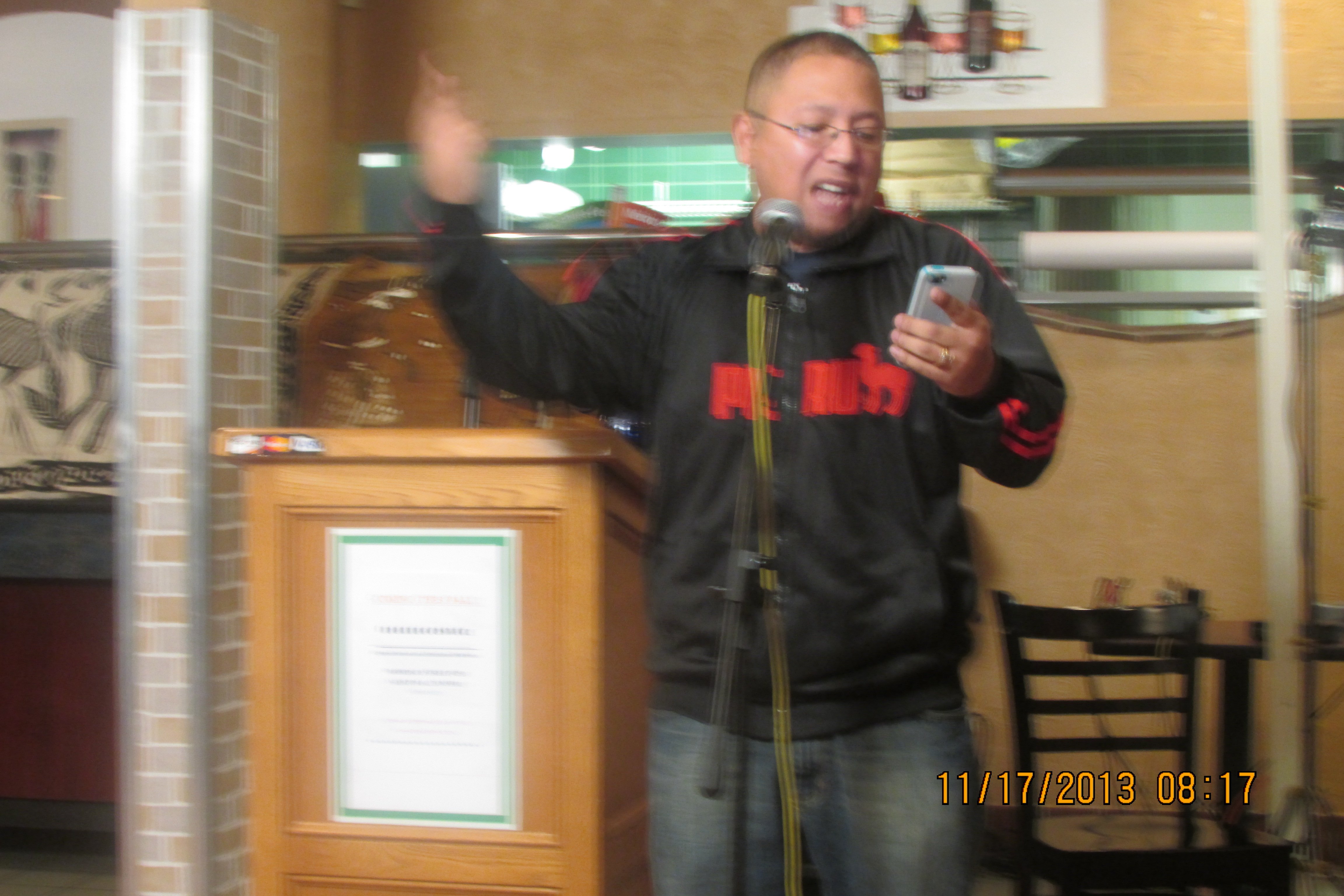 Ibe Kaba, who is an author, teacher, community editor for the Saint Paul Almanac, and spoken word artist, welcomed everyone into the space. Kaba explained that accent, the theme of the event, is not just how people talk, but also the experience that comes with that.

Shahar Eberzon, a singer and song writer, was born in Beersheba, Israel. Eberzon was accompanied by a keyboard player. Eberzon sang two songs: “Believe” was about her experience as an immigrant in the United States, and a still-untitled song was about her grandmother living through the holocaust and sharing her story with her family.

Bryan Thao Worra, a Laotian American author, has been an artist for 20 years, has written seven books. Thao Worra, a former Minneapolis resident, now splits his time between California and North Minneapolis. His day time job is writing grants for organizations that serve refugees and artists.

Thao Worra shared with a poem about an old traditional story that God has a 72 syllable secret name and if you can pronounce the 72 syllable secret name you will be given ultimate power (or you can destroy the universe, he said jokingly.) Another poem he read was one of the first poems he wrote in Minnesota called “Riding the 16” as he described the landscape and restaurants of Saint Paul and Minneapolis.

Rodrigo Sanchez Chavarria, who is from Peru, performed three poems. The first was about where he is from and who he represents. The second was about the video game, “Street Fighter 4,” and the misrepresentation and stereotype of a Hispanic character named Fuerte. His third poem, “Lady Bug,” was about the relationship he has with his children.

Before the performance, Pettiford told me she performs because she feels it is her ministry and her untold truth. “People need to hear the truth,” she said. Pettiford stated that she brings forth life-giving music that rejuvenates people and gives them hope. She is now working on her second album and is doing restorative justice work with homeless youth. I asked the singer what advice would she give to up and coming artists, and she said that artists should stay true to themselves and tap into their higher power to guide their path.

Nimo Farah said she was wearing bright colors to give the sun a helping hand because the sun goes down at 5:30. Before Farah began her performance, she acknowledged all of the elders in the room. She shared a story that she written that was published in the 2012 Saint Paul Almanac, “Titanic Tower,” which included description of traditions and customs of Somali culture.

Leslie Young read a passage from her book, I’m Raising My Husband. The book is collection of journal entries that covers her feelings and struggles of her five-year marriage and her courage to move forward without being bitter. She talked about when she first got divorced and her journey of reflection and healing.

Chaun Webster, an activist, author, publisher, poet and spoken word artist, and the founder of Free Poet’s Press, performed spoken word. Webster empowers artists of color to control their own images and voice in media. He has an old soul and is a throwback from the freedom fighter days.  The YouTube video below gives you a deeper look into his work http://www.youtube.com/watch?v=Y_34zAwHd6A.

At the end of the evening, Professor Mahmoud El Kati, who is a lecturer, writer, author, and community elder, talked about using art as a platform to have hard conversations and how today society is afraid of artists who have these conversations.

Faye Murila, who was in the audience, said she thought the show was incredible, and she especially liked the diversity of the artists. She also said that the show encouraged her to dust off her pen and start writing again.

Each of these artists left me with stories, encouragement, advice, empowerment, inspiration, insight and love. Each and every artist shared a part of themselves that spills over into the community in the form of deep conversation and action.

This event is on a break for the holidays and will start up January 26 2014. The events will be the last Sunday of each month, in a collaboration of Global African Roots, Jambo Africa, Uhuru books, and First World TV. The purpose of these events is to bring people together so that they can support one another. This partnership is the bridge that unites small businesses, artist, and community. If artists are interested in performing they can contact to Global African Roots for more information contact africanglobal.roots@facebook.com Web Site:   http://www.agrmn.com/