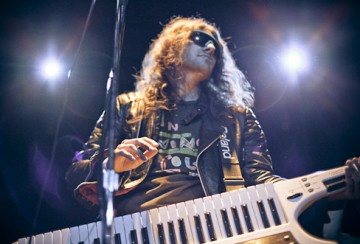 Name: Jake BadNraD
Website: badnrad.com, and “we can’t forget my amazing Tumblr, because it’s so chock-full of amazing radicality that your eyes might bleed neon rainbows.”
Twitter: @badnrad

What’s your job?
“My job is to produce and perform tubular tunes for the masses while simultaneously being both bad-ass and radical. Aside from that I really enjoy making videos. I’m in an awesome band called Honeystick—who are also the dudes behind the new BadNraD live band. If you’ve attended any Minnesta Rollergirl bouts in the last couple years, I was the mascot Dagger Dude, for the Dagger Dolls team. I was in Gigamesh’s latest music video rocking the guitar ‘like a bau5,’ as the kids say. You may have seen me on the hit cable access show Freaky Deeky a million times performing with Tecon Johnson, Matt Kamilar, and Hal Lovemelt as tween sensations 1st PUBE. Also I used to live with the Bloodnstuff boys, so I’ll be saying that a lot once they’re famous.”

What’s your relationship status?
“I’m in an amazing relationship with the beautiful Jenny Bellew. She’s everything you could ask for in a girl and has been my best friend, inspiration, and iron chef for the last five and a half years! She’s also the hot blonde babe dancing on stage or in the front row at all my shows.”

Where are you most likely to be seen?
“I’m most likely to be seen in my basement, ha ha. Kind of a hermit most of the time, just making music, watching movies on VHS, practicing, yoga, promoting, creating, drinking tea, Tumblr, playing with action figures, experimenting in the lab, etc. I love grabbing a drink at any of the Lyndale bars, and you will definitely see me at a lot of the electronic dance music events around Minneapolis. First Ave, Skyway Theater, Bar Fly, and Ground Zero are probably the places I’ll end up most over the summer. Oh and I’m always at Ridgedale mall getting my chicken teriyaki sub at Charley’s and re-upping my Samurai Chai Mate tea supply!”

Where are you least likely to be seen?
“You won’t find me at too many rock or rap shows—not that I try to avoid them by any means, but if I’m going out to a show it tends to be for a special occasion, band, or artist that I’m into, and most of them happen to be more dance-music oriented.”

With whom are you most often seen?
“You’ll see me most often with someone from Honeystick: Tecon, Chi, Natron, and Bunz a.k.a. Benny Drama of Green River Recordings. Or, people like Matt Kamilar—the graphic artist behind my CD design/logo/site etc.—Hal Lovemelt and Papa Matt of Playatta because we’ve all been friends for a very long time. Steve Gurewitz, the writer and director of Marvin Seth and Stanley, has been a friend and neighbor for about as long as I can remember. And 90% of the time if I’m out and about I’ll be with my girlfriend Jenny and her girlfriend Caia, partying as hard as possible!”

Where were you born?
“I’m Minneapolis born and raised.”

In what neighborhood do you live now?
“I live in the wonderful suburb of Golden Valley—which is actually where I was technically raised.”

What’s your ride?
“Right now my ride is a neon motor scooter, the Radicycle! But I’m really big on longboarding as well. Hal Lovemelt, Dylan Gouert—of Bloodnstuff—and I are trying to start a monthly longboard meet-up, so certainly hit me up if you’re a longboarder and you want to shred with some serious hunks.”