With a large Hmong population, St. Paul is a national leader in integrating Hmong culture and language in public school education. Jackson Preparatory Magnet School, located in the Frogtown neighborhood in St. Paul, was the first in the country to offer a Hmong Dual Language Program. (A second pioneering program in St. Paul Public Schools is Phalen Lake’s Hmong Studies Magnet.)

Jackson’s Hmong Dual Language program began during the 2006-2007 school year with one kindergarten class and one first grade classroom, adding second grade and pre-K in 2007-2008, third grade in 2008-2009, and fourth grade in 2009-2010. Though it is a K-6 school, Dual Language isn’t offered for the highest two grades, because of financial reasons, and next year the school will only be a K-5 school as part of Strong Schools Strong Communities, according to principal Yeu Vang.

The school follows the 90/10 Dual Immersion model, where 90 percent of instruction during primary grades is in Hmong, with more English being introduced each year. Specialist classes, such as science, music, and physical education are taught in English in grades K-4.

So far, the program has not attracted any non-Hmong students. In their Pre-K class, over half of the students are not first language Hmong speakers, but rather their language of choice is English.

Vang said the dual immersion approach helps students with language acquisition. “It helps them build a language foundation so they can really transition into English,” she said, “whether it be English or the target language.” For non-Hmong speakers, “it is really an opportunity to acquire another language,” she said, because it helps with the structures of developing another language. 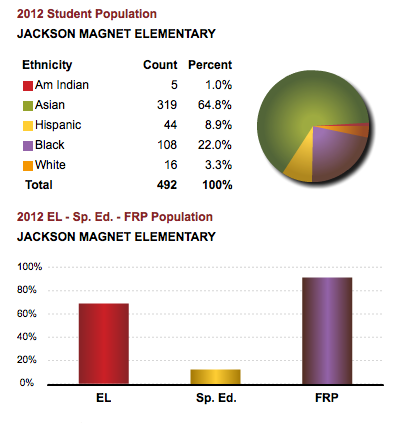 According to the Minnesota Department of Education, about 492 students attend the school, and the population is about 65 percent Asian. These students are mostly Hmong, Vang said. Some 22 percent of the students are African American, and 9 percent are Latino. Three percent of the students are white, and one percent are American Indian. Most grades have one out of three classrooms dedicated to Hmong Dual Language, although for kindergarten, that number is one in four and for pre-school it’s one in two. (Chart above from Minnesota Department of Education.)

Academically, test scores showed the percent of students proficient in math was about even with the rest of the state, exceeding other students in St. Paul schools until 2011, when math scores ropped dramatically. The school’s math scores climbed back up in 2012 to reach the city average. (Chart below from Minnesota Department of Education.) 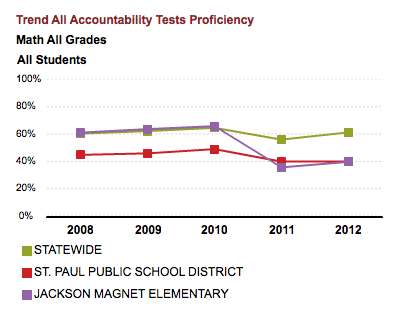 Student reading proficiency had been below the state average,but about the same as St. Paul, until 2010, when Jackson scores began to decline slightly, as overall St. Paul scores continued their slow but steady growth. (Chart below from Minnesota Department of Education.) 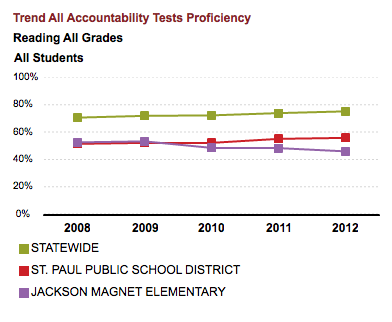 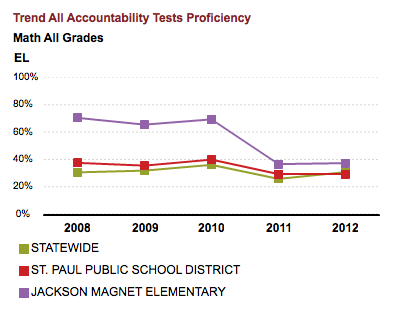 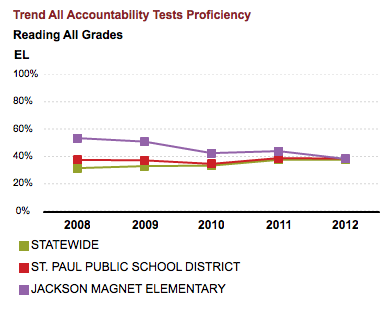 Vang said that part of the challenge that the school has faced includes the amount of time and work it takes to get all of the curriculum translated into Hmong, as well as aligning that curriculum to the common core and assessments.

Fourth grade teacher Mee Vang agrees that curriculum is a challenge. “We don’t have enough curriculum,” she said. “I use a lot of my prep time to translate materials that I need. I’m having to translate reading material that fits with the objective. That would be the biggest challenge for me.”

For Principal Vang, “Much of the things we are doing in partnership with Phalen is to divide and share the work,” she said. “It’s quite an undertaking. There’s an unrealistic expectation for our teachers. But we are history in the making, and we are happy about it. We are not complaining. Our teachers are proud of the work, and are more than willing to help.”

In addition, because assessments are generally not translated into Hmong, the students are taking the tests in English, though especially for third grade students, their exposure to English has been limited, according to Vang.

The students in the dual language program and in the regular school achieve at comparable levels, Vang said. “It’s the same percentage of being well below or on target. There’s not a huge discrepancy.”

Vang said Jackson is very strong in partnering with the community to address the needs of the students, in part due to the Promise Neighborhoods Initiative. “It allows us to be there for agencies and organizations,” she said. “We have organized and coordinated efforts for providing interventions.”

The school works with the curriculum that the district prescribes, which they have “implemented with fidelity,” said Vang. In addition, they have specialist teachers that help with remedial math and reading skills.

The school has received a United Way grant that offers reading intervention for K-3 students. The school also benefits from a federal Investing In Innovation grant, starting with pre-K.  That grant helps with the Child Parent Center. 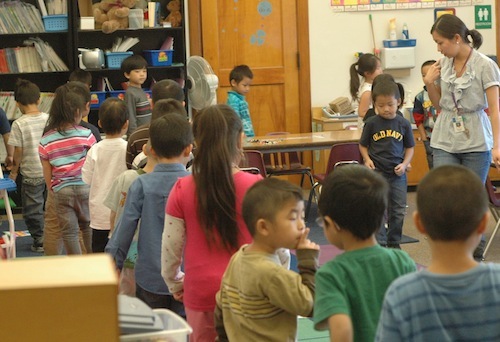 Fourth grade teacher Mee Vang is in her fourth year teaching at Jackson, after subbing for a year and then starting as a full time teacher three years ago. Before that, Vang taught pre-school for two years. About half the class day is spent speaking Hmong and half in English.

Mee Vang believes the dual language approach helps students communicate with their grandparents. “A lot of grandparents don’t speak English,” she says. Academically, the dual language approach helps students who do speak more than one language but comprehend certain skills more than others.  “Basically, it’s beneficial to the for their entire life,” she said.

The majority of Vang’s students are English Learners (EL). This year, after the MCA tests, some of her students opted out of the EL program, but still there are fewer than 10 who are not in the EL program.

Vang believes you really need to be committed to the job and to the students and what it is they are learning. “Everybody is capable of learning another language,” she said. 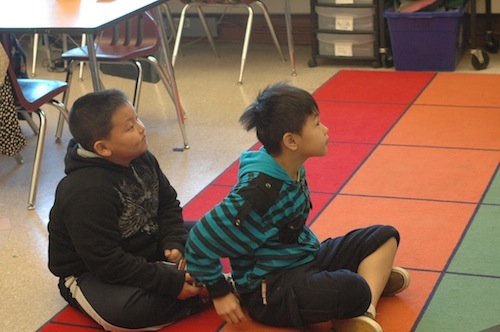 Many of her students are dominant in either Hmong or English, although some speak both well.

Vang believes in setting rituals and routines for each day. “That helps students become good language learners,” she said.

A typical classroom day for Vang includes speaking only Hmong in the mornings for readers workshop and math, and having the morning meeting. Then, after lunch, everything is in English, including another readers workshop block and more math. Depending on what the writing units are, those will be conducted in Hmong or English.  Science is taught two days a week, and social studies is part of the class’s “theme time.”

Phonetala Yang has two children enrolled in the Hmong Dual Language program at Jackson. She chose the program because it helps keep their identity of who they are, and preserves the language, “so they don’t lose it,” she said. Yang tries to get to the monthly activities such as family, night, physical night, Hmong New Years, etc.

Her older daughter, in fifth grade, is doing way better than she expected at the school, in reading, writing and math. Her son, in first grade, also does really well, and is in the high end of his class. “He’s doing second grade work already. I’m pretty happy,” she said. The academic support that the school gives to the teachers is very good, she said.

“The teachers are wonderful,” Yang said. “They keep me as a parent updated.”

Unfortunately, not all of the parents at the school participate.  “I wish more parents were involved in PTO. Many have jobs and are too busy,” Yang said.

Principal Vang agrees that the school struggles with parent involvement. “We have a lot of partners that come into help us do the work that we have control of. It’s the out of school time — and what happens or doesn’t happen. I feel like we have less control over that,” Vang said. “There’s probably less initiatives and efforts that provide basic needs. Children come to school not ready to learn if those aren’t met.”